The wind is predicted to stay in the 20-30 k range, with gusts higher, all week.  So we decided to stay put.  Anyplace we go from here is going to be much more exposed to the winds.  So this is what we did all week.

Anchoring etiquette
There are about 5 boats at the west end of this harbor (they come and go).  The west end is deeper, so there is more room for boats.    We decided to come here early to get the deepest spot into the east end of the harbor.  We would rather be by ourselves.  You never know how well others set their anchor and how well it will hold.  When we anchored on Thursday, we were facing the west.  The boat moved with the wind to face east, then south then west and then north.  That’s why your anchor can dislodge if it isn't set good in the first place.

On Tuesday, another boat tried to anchor right beside us, spitting distance as Dave informed him.  As the guy was setting his snubber on the anchor line, Dave went out to talk to him about being too close to us.  The 2nd boat’s reasoning was that the wind was going to stay from the east and our boats wouldn’t move.  Well, Dave could tell he wasn’t going to listen to reason, so he told him straight out “you are too close”.  Then he went on to tell him that there is a thick book on anchoring and that he aught to read it.  Hmmmm, something convinced the guy to move.

He then anchored directly in front of another boat that had come in right after him, also too close.  We saw the guy on the 3rd boat come out to his bow and exchange a few words.  We weren’t close enough to hear the conversation.  The 3rd boat ended up moving.

We have discussed how to handle this with several other boaters.  It just isn’t safe to anchor that close to each other because of the way your boat swings when the wind changes, or if the anchor doesn’t hold.  Dave later came up with a new plan.  He is going to sit on the deck of our boat with a power drill and the biggest bit he has.  He will just rev it up a couple times to let the other boater know he is ready if he gets too close.  Just may work.

On Wednesday, 4 other boats came into our east end of the harbor and all anchored at a safe distance from each other.  It helped that 3 of them were catamarans and could anchor in shallower water.  Dave noticed that the goof ball from the other day was out watching and could see Dave give everyone a polite wave. 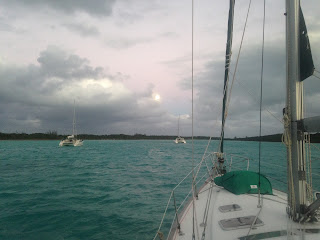 Football
On Sunday, we used our data to listen to the NFL playoffs.  Go Packers!!  On Monday, we listened to our favorite college football team lose the national championship.  Alabama lost to Clemson 35-31 in the last 9 seconds of the game.  The entire game was a nail biter.  I have to say, Clemson deserved to win.

Projects
Dave always finds little projects to improve our boat.  He replaced the rope on the traveler with the rope from the dinghy davits.  The traveler helps hold the boom to starboard or port for better use of the wind.  He had to run it through the correct blocks and back to the cockpit where it is controlled.  Any rope on a boat has a different name once it is put into use, such as halyard, sheet, pennant and pendant, and basic lines.

The leather cover on the helm is sewn in place.  Dave has restitched sections that have worn over time.  But now he is restitching the entire wheel.  He will do sections of it at a time to give his  fingers a break.

He rearranged the cushions inside one of our cockpit chairs.  The cushions had moved off of the arm rests leaving hard wood covered by the outside cloth.  When you sit in that chair for hours during a passage, those little things can drive you nuts.  A new chair is in the $150-200 range in the states.  So we make it work.

Dave wanted to use his electric hot knife to cut different ropes for different projects.  To do that, he had to turn on our inverter, if the batteries were sufficiently charged.  Then he ran an extension cord out into the cockpit to be able to plug it in.  There are no AC outlets outside of the boat.

I cleaned all the bug screens for our ceiling hatches.  We had most of the windows closed because of the cold wind.  So this was a good time to take care of that.


We use a webbing in the salon area as a hand hold when we do a passage.  We have left it up to have the hand hold and to use as a clothes line.  Since it is basically a thick ribbon, we decided it should be washed.  I’m sure mildew wants to grow on it, if it hasn’t already.   We’ve been hesitant to hang laundry outside because of the strong winds.  Most of our clothes and towels aren’t too valuable.  But the dang non rust clothes pins are about $1 apiece and hard to replace!!

Food
We were in the mood for pizza.  So I made a pizza sauce from scratch.  And I tried a pizza dough recipe that I have had for years but had never tried.  We ended up with 2 9x13 pans of pizza (that’s what fits in our oven one at at time).  It was yummy.  Then I stored 1/2 of each pizza in foil.  We put them in the oven at a low temperature to warm them up the next day.  Remember, we removed our microwave.

Wednesday we made pretzels from scratch.  Dave had talked about making them before Christmas, and we finally gave it a try.  The recipe was a pretty basic bread recipe.  You don’t have to let them rise.  And you dip them in warm water with baking soda before you bake them. 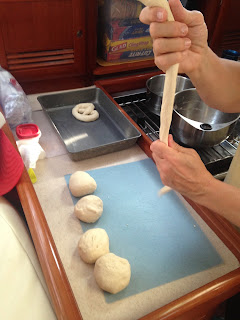 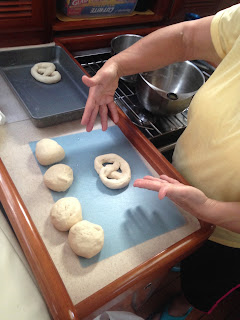 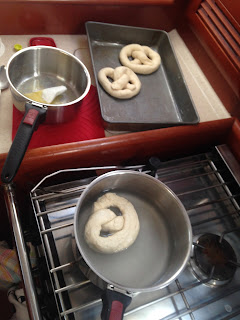 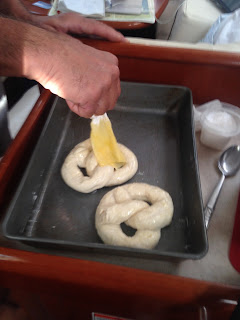 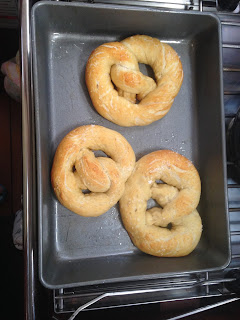 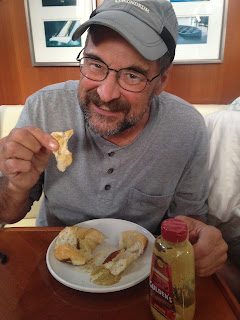 Since we had the pretzels, I wanted to make a German meal.  We had some thin cut beef in the freezer that we thawed to make Roladen.  My brother Jerry gave us an awesome recipe years ago.  And I can’t remember the last time I made them without him.  I had all the ingredients on board, so why not.  You put mustard on the meat, then a slice of bacon, a dill pickle and a carrot.  You roll them up and tie with with an unflavored dental floss.  You brown them and bake them.  Then make gravy from the sauce.  Usually I would  have made spaetzle or some kind of potato, but too much to try in one day.  We like to have rot kraut, or red cabbage, with a German meal.  I didn’t have red cabbage, so I tried my recipe using canned beets.  It turned out great, too.  With the pretzels, we wouldn’t have had room for another starch anyway.  What a meal!  Only thing missing was a good German white wine or a good German dark beer.  I settled for a 500ml box of white zinfandel. 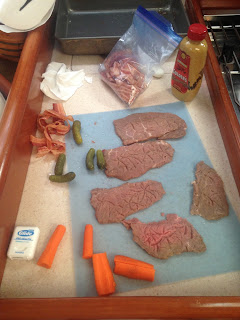 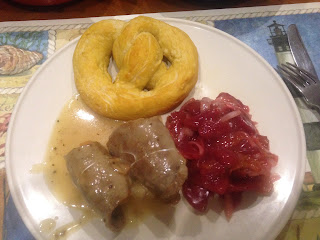