There was going to be strong winds through Monday, so we decided to move back to Royal Island and the protection in the harbor there.  We want to listen to more football games, but we decided it would be cheaper for us to use our data and listen to it online than to go in to a restaurant/bar for 3-4 hours.

We both set to work on completing some projects in 2016 before the 3:00 football game.  I cleaned the fans in the boat.  We have 2 in our v-berth, one in the salon and one in the galley.  The one in the aft cabin isn’t used much and didn’t need cleaning.  The other fans were FILTHY!  The boat was closed up all summer and we were doing all kinds of work inside and outside of the boat, so they collected a lot of dust (human skin cells).  It was getting to the point where you wanted to duck when you turned them on in case any chunks would fly off of them.  OK, it would have been embarrassing if anyone else would have seen them.

The back of the fan can be removed and cleaned in the sink.  But the rest is wired to the ceiling.  So I had to lay down a towel under each one and clean them in place.  Wow!  Why do we put off some things for so long.  I should have done these 2 months ago. 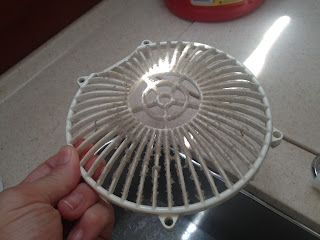 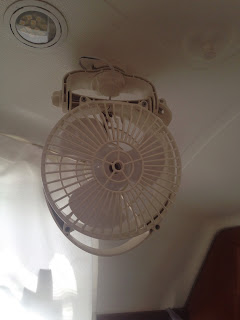 Then I finished cleaning the galley by using the Old English on the wood work.  I really like the  finished look and will do that more often (don’t hold me to it).

Dave spent the early afternoon finishing the cleaning of the bilge in the aft cabin.  To work under the engine and the shaft, etc, he had to bring several totes out into the main cabin.  Then he could lift the board under 1/2 of the aft bed to get at the area.  He cleaned everything with warm soapy water.  Now the fuel leak project is complete!!  Dave said he lays awake at night just hoping we won't have more than one system at at time that needs attention.

The wifi signal isn’t as good here, so Dave rigged up a cell phone signal booster that we have, but haven’t used for a couple years.  He ran the antennae out of a salon hatch and up the flag halyard to get a good signal.  Then he turned on the hotspot on his cell phone and connected the laptop to the hotspot.  Everything was in working order by the 3:00 kickoff of the Alabama Crimson Tide game against Washington State Huskies.  AND we won.  ROLL TIDE!!  And we were surprised that it didn’t use too much data to listen to the game.
It was a pretty boring New Year’s Eve.  We were in bed by 10:00.  But I did wake up at midnight and took a look outside.  We are about 10 miles from Spanish Wells, and I thought I saw some flashes of fireworks in that direction.  Happy New Year!!

Posted by svluckofafool at 11:49 AM