We spent the morning doing some internet business.  Dave has a Ham license for the US.  So he periodically checks in with the Waterway Net at 8:00am.  This morning someone mentioned that he should have the c6a license.  So he asked about it and found out he should have a reciprocal Bahamian license to be able to transmit on the radio.   So like all government sites, it was confusing to find out how how he could do this online.  He needed copies of his US license and his passport and had to pay online.  In the middle of all this, he would lose the wifi signal and everything would come to a stop.  Now we’re not sure if he’ll get a copy of the license online or if they’ll mail it to our US address.  All we can do is try.

I was making arrangements for a friend to visit us in a couple weeks.  The daughter of good friends of ours will be in the Bahamas for work and wants to spend a couple days with us.  Gene and Colleen Schneider’s daughter, Kaitlyn, is going to meet us in the Exumas for 3 days.  We are all so excited.

By early afternoon, we moved the boat to the southern part of this bay/sound.  We hung out a load of towels today.

We weren’t too excited about swimming, so we did some exploring in the dingy.  There were two power boats anchored not far from us.  There were several people on board and a few in the water.  Then a smaller boat would take about 4 people at a time to a distance away from them.  We’d see people in the water and come back.  We decided it was either some kind of tour or class.  They weren’t diving, only snorkeling or swimming.

We checked out a rocky area nearby to see if we would want to fish there tomorrow.  We were disappointed.  Not much there.  We wanted to check out a creek, but it was too shallow.  Not much luck there, either.

By now, the other boats were leaving.  We heard there were some blue holes in the area, so we wanted to check out the area where they were.  We mixed a container of gin and tonic and just drifted in the dinghy.  It was such a calm afternoon.  In the dinghy, we get away from all the things we think we should be doing on the boat. 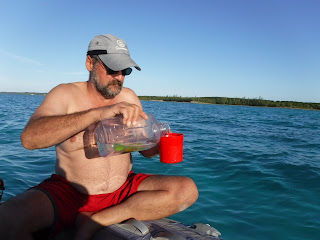 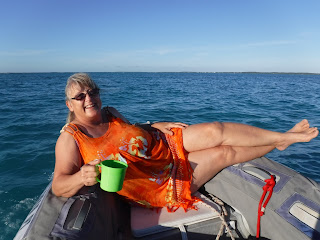 We never did find a blue hole.  Later I saw on a map that there was one there.  The general depth of the water in that area is 3-6 ft deep.  But this hole is 20 feet deep.  There’s antoher one a little further away that’s 45 feet deep.  Would be cool to snorkel and dive down into the hole.  Maybe we’ll go back with GPS coordinates and no gin.

Posted by svluckofafool at 6:05 PM