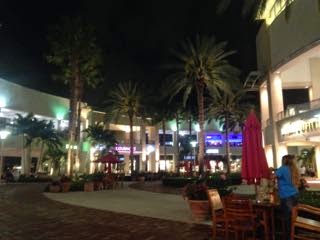 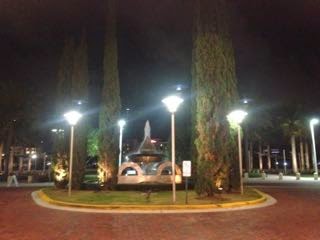 Up early and off the boat early to get Alice to the airport.  The airport was about 60 miles away.  Just before we got onto Interstate 95, we realized we were out of gas.  And luckily there was a gas station right there when we needed it.  We couldn’t find the button to open the gas tank cover on the rental car.  I finally saw it on the door.  I don’t think we’ve ever rented a Dodge before, because I’ve never seen that on the door.  As soon as we got on the Interstate, Dave and I both noticed the hood was not latched.  Dave or I must have pushed the button for the hood looking for the gas tank button.  So we pulled over and took care of that right away. We were glad they had the commuter lane for 2+ people, or we would have been sitting in traffic.  We made it there by 9:15 for her 10:50 flight.  I dropped off Dave and Alice.  They went to the airline counter and were able to get Alice a wheelchair.  Then someone was able to take her right to her gate.  (And evidently, that helped everything go smoothly for her transfer in Dallas/Ft Worth.)

Since traffic was kind of heavy, we stopped for a late breakfast at a marina in Lighthouse Point.  We had thought about staying here, but decided not to move the boat that far south.  After breakfast, we walked out on the dock out to the dock master/bait shop.  We asked if he was Zack, the guy I had talked to about renting a slip.  He said “No he’s at the next marina north of here.  People confuse these two marinas all the time.”  If we wouldn’t have visited with him, we may have pulled into the other marina from the water someday and both have gone “this isn’t the place we stopped at!”  Or maybe neither one of us would have said anything thinking that we had lost our mind.

We spent the afternoon doing a load of laundry, downloading chart updates, and napping.  About 4:00, we did what we always do when we have a rental car, went on a date.  We went to dinner and a movie in Palm Beach Gardens less than 5 miles from our boat.  We had stayed in this area for a dental meeting about 3 or 4 years ago.  And Cheryl and I had eaten here in November between hospital visits to Beverly.  So we went to Coola Fishbar.  I remembered it being awesome in November.  And they had a “Sunset” menu from 5-6:00 that was limited and cheaper.  Dave had a Caribbean Seafood Bowl with shrimp, mussels, fresh fish sautéed in Thai coconut curry sauce over coconut basmati rice.  I had the pecan encrusted salmon.  We both took half home with us.  Then we went to the mall nearby with a theater.  We started circling the place only seeing street parking, not a lot.  We turned around in a driveway and realized it was valet parking for the mall.  So we whipped around again and handed over the car.  Now why don’t they have that service in the north where it’s *&%$^%# cold and windy?

It’s so strange picking a movie, because I don’t know anything about them.  We don’t see advertisements for them.  We went to “The Second Best Exotic Marigold Hotel”.  Dave remembered seeing something about it on tv in a restaurant Saturday morning and thought I would like it.  It was a comedy/drama.  We loved it.  There were a lot of familiar British actresses and Richard Gere.  Full of humor, great views of India, great relationship twists, and left smiling.  Best line “there is no present like the time”.  Could be our new motto.

Sounds like the weather isn’t going to cooperate for us to make a smooth journey to the Bahamas for another week.  We tomorrow, we have take back the rental car and decide how long we will stay in this marina vs anchoring for the week.  Remember Dave’s saying “Boats and men rot in a marina.”
Posted by svluckofafool at 8:04 PM