WE DID IT!  WE FINALLY MADE IT TO THE BAHAMAS, THE FIRST FOREIGN PORT ON OUR BOAT!

We left our anchorage at 10:00 pm as planned.  We tried to get some sleep, but were both awake and anxious at about 8:00.  We had a nice dinner of our leftover pork and rice.

There wasn’t any traffic in the inlet as we left, though we did pass a few fishermen on our way to the channel.  The ocean was perfect.  About 7mph wind from the ESE and 2-4 foot swells.  West End, Bahamas is straight east of the inlet.  We were  heading for Memory Rock about 20 nm north of West End.  But we started out going more towards the south, 120 degree heading, because the Gulf Stream will move us north as we travel east.  If you don’t, you may be fighting the current or you could miss your destination by being too far north.

We were both in the cockpit for the first couple hours.  Then we decided we should start taking watch at midnight.  I was a little tired, so Dave took the first 3 hour watch.  His watch was uneventful.  He saw a ferry going to the Bahamas called Dolphin Dream, and a few other boats at a distance.  The Gulf Stream was supposed to be about 9 miles off the coast at Palm Beach.  So when we reached deeper water (the depth meter stopped at about 500 ft) he changed our course to the NE to Memory Rock.  As soon as he turned, the boat picked up speed, so he figured we were in the current already.  We started out at about 5 kts with pulling the dinghy behind us in the water.  But picked up to 6.5 kt, with the highest I noticed being 7.3 kt.   We have been traveling with the dinghy hanging on the davits at the stern.  But traveling in open water, we wanted it in the water for easy access should we have to abandon ship.  New motto: Be prepared, don’t react.

At 3:00am, I started my watch.  Within about 30 minutes, I could see  a boat moving south crossing our path.  It was at least ten miles out in front of us,  and moving much faster than us.  So I wasn’t worried about colliding.  Something I learned years ago sailing, and maybe this is common knowledge, is to match the other boats position with something on our boat, like the frame of the bimini.  If it stays in that spot, we are likely to collide.  If it moves forward or back, they will pass us.

So I start maneuvering side to side to see around the mast and all of a sudden see a large white light, bigger than what I thought a boat at that distance would look like.  Trying not to mess my pants, i reach for the binoculars.  And before I can even get them to my eyes, I realize it is the moon rising!  It was a sliver of a moon and there were clouds hiding part of it.  That was enough to keep me awake for the full 3 hour watch.  And it actually looked beautiful reflecting on the water as it continued to rise.
Well, I soon realized that there was a ship super highway that we were going to have to cross.  Ships kept appearing going north and south along this same area.  Some people say they wouldn’t cross to the Bahamas at night because of all the shipping traffic.  But we feel we can actually see them better at night with the lights and the radar.  We can identify the ships with our AIS.  The info told me that they were under engine power, their tonnage, length and how fast they were moving.  That’s all I really needed to know to realize I didn’t want to have to get out of their way.   The closest we got to one of them was 3 miles away.  Our AIS sets off an alarm at that distance, just in case I had fallen asleep.  I didn’t see another ship after that!  So I made it across with out having to worry about dodging one of them.  We didn’t name our boat Luck of a Fool for nothing.

Something else that was interesting was the fact that the water was over 2000 ft deep in this area.  It is about 50 nautical miles between Palm Beach and West End.  About 10 miles off Palm Beach the depth drops off the deep end.  And it stays deep until you are within about 10 miles of the Bahamas.  Someone told us you know you are getting close to land when your depth meter starts working again.

Dave started his watch at 6:00 am and we planned to reach Memory Rock by 8:00.  So I asked Dave to wake me to see the sunrise and to help navigate into the Bahama Banks. About 7:30 he woke me for the sunrise.  We were about 5 miles off shore, but had a slight problem.  Dave’s watch was pretty boring, so he was trying to liven things up.  He had the main sail out for most of his watch.  He  decided to bring in the sail, and since it was going in so smoothly, he didn’t want to waste time by changing course and turning into the wind. That is recommended with a main that gets rolled up inside the mast.  Well, the sail got stuck.  So he had turned into the wind by the time I got up and was raising and lowering it, letting the wind catch the sail and eventually working the wrinkle out of the sail so it could be brought in completely.  Whew, another Luck of a Fool moment.


Within a few miles of shore, Dave raised our quarantine flag.  A first for us.  Memory Rock is just a big rock with a light on it for navigation.  Well, where there are big rocks, there are also little rocks.  There is a wall that reaches north from West End that forms a bank.  So we went by the suggestion of our Active Captain guide and crossed through the rocks just south of Memory Rock at about 8:30 am.  Dave took it slow while I watched for any breaking water over a rock.  We made it through with no problems, then traveled through a shallow area before getting inside the Northern Banks.  Now we had generally 12-15 feet of water and about 45 miles to go straight east to our anchorage at Great Sale Cay.   Another Luck of a Fool passage.

NOW we have the beautiful blue tropical water.  We have been dreaming of this moment for a long time.  Even before we left Alabama and had a list of things that needed to be done, I would put BW next to some items.  That meant that it could wait until we were sitting in Blue Water.  I was told that living in a boat meant that you got to work on your boat in pretty places.  And now I understand. 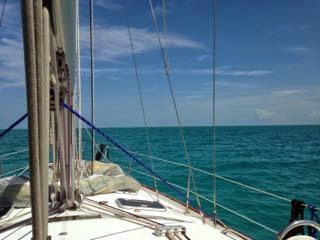 I really had to struggle to stay awake during my 9:00-12:00 watch.  Dave took 12:00 to 3:00, both watches uneventful, except for seeing flying fish.  They skim across the water for long distances.  Cool to see.  Me again at 3:00.  By now it was getting pretty warm inside the boat.  So Dave napped out in the cockpit.  He had a nasty headache for the past couple hours and was feeling miserable. It was exciting to see land by about 3:30.  By about 4:30 we reached Great Sale Cay.  As we were entering the bay to anchor, we heard a call for assistance over the VFH.  Someone had smoke coming out of their engine room and couldn’t get into it.  They were about 10 miles from us, which would take about 2 hours for us to reach them.  As we listened, another boat in the area was heading there along with Tow Boat US.  So after we anchored, I did some research into whether the Bahamas has a rescue service comparable to our Coast Guard.  They have BASRA, Bahama Air-Sea Rescue Association which is volunteer.  But we also have a USCG branch in Nassau.  So that’s good to know.
We were anchored by 5:00.  Not too long after that, Dave was in bed.  I stayed in the cockpit reading until sunset.  I also spent some time looking over charts for our next leg-on to Green Turtle Cay and Customs.  It is about 50 miles-10 hour day.  The weather is supposed to change tonight with stronger winds from the north.  So we’ll see decide in the morning if we are moving or staying put for a day.

We really feel like we had great weather for crossing.  It took us 19 hours to go about 110 nm (60 to cross and 50 to Great Sale Cay).  And overall, thought it went very smooth for our first time crossing.

Posted by svluckofafool at 7:09 AM