3-10-15
Tuesday
I quit counting how many times I have said we are getting the boat ready to go to the Bahamas.  Seems like that day will never come.

I returned the rental car this morning.  The Enterprise driver, that took me back to the marina, and I had a chuckle about the draw bridges.  He said people are always getting mad at him when they have to wait for a stupid sailboat to go through the drawbridge.  I said we are always complaining about how some bridges have to open on a schedule, like every 30 minutes,  and not just when we call for an opening.  Two different perspectives.  But I was surprised to see how far the traffic actually backs up when they are waiting.

The marina has a shuttle that will take us to the grocery store & other places in the area for tips only.  So we really don’t need a car anymore.  Early this evening Dave said “ I already don’t miss having a car”.  It seems to add stress trying to figure out where else we need to go while we have it.

I spent the late morning and early afternoon doing laundry and mending.  YES, mending.  Now if you know me, you know I am not a  seamstress.  My mother could sew anything.  She sewed lots of clothes for the girls as we were growing up.  She even sewed my wedding dress putting together a couple different patterns and laying out her wedding dress to cut the train.  I started sewing in Girl Scouts.  And my sisters continued to sew into their adult lives.  But being the baby, mom would say “let me do that for you, you’ll have to do that when you are older.”  So I can “fix” things, but always paid to have something done if it was important.  And actually, Dave knows how to sew, too.  He actually suggested getting our own sewing machine and making our dodger and bimini last year (the canvas covering of the cockpit).

I have a favorite swim suit cover up that was tearing at the edge of a tuck right in the front   It was orange, but all I had was white, black, green and brown thread.  So I went with brown.  I knew it would show, but I figured if I was in public in a swim suit cover up, there would probably be women without cover ups that would get more attention that me.  When I finished, Dave said he didn't know I was going for a design.  And it reminded him of a movie.  He was referring to the lighting bolt shaped scar on Harry Potter’s head :( 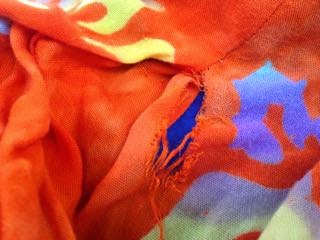 The laundry facilities are outside at the shower house with tables and umbrellas on a deck.  There is only one washer and one dryer at the shower house closest to our boat.  So three loads was  going to take awhile.  That was OK.  Besides the coverup, I needed to shorten the straps on a sundress I picked up at my favorite clothing store-Mona Lisa’s on Main in Rapid City.  Of course it was on sale in January.

Dave joined me before I started the last load.  He had to give me the clothes he had been wearing.  He had been filling fuel jerry cans and topping off our tank.  So he didn't want to put on clean clothes for that.  As we were sitting there, a lady come up to the shower with a dog.  Instead of asking what her dog’s name was, he said “all the dogs here are called Maggie”.  Right away she said “not this one, his name is Shamus.”  He always comes up with a way to strike up a conversation in a different manner.
We met another neighbor.  He introduced himself first and said his name was David.  I said, we're Dave and Mary.  Dave shook his hand and said "hi, I'm Mary."  He finds out right away whether they have a sense of humor or not.

Dave didn’t sit there long before he had to go get us a cold soda.  He came back with a six pack of Corona Light and a couple small bags of chips.  That just took doing laundry to a whole new level.  He found a chip made by Doritos called Dinamita.  We had never seen them.  They were chips rolled into the shape of a stick of dynamite-or a straw.  They were spicy and salty.  We had to dirty one of our clean towels to get all the flavoring off of our fingers, worse than Cheetos, so we could fold clothes.

When the laundry was done, we both showered.  Now we were in the mood for Mexican.  So we walked about a mile to LaBamba Mexican restaurant.  And I wore my new sundress.  Dave had the Chili Relleno and I had the seafood fajitas that had excellent fish and shrimp.  We had to carry a lot home with us.  But we love leftovers. 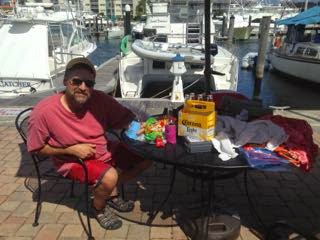 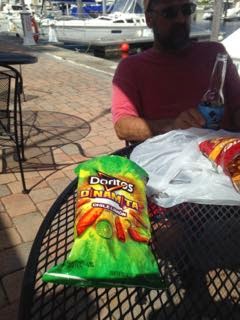 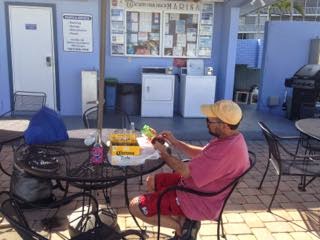