3-4-15
We decided last night that we didn’t want to spend another night in this marina.  So today we wrapped up things to move the boat again.  Dave was visiting with the couple on the boat next to us.  The husband works on cruise ships for 5 weeks at a time and lives on the boat in between.  He said he was tired of working on ships with “self loading cargo”.

I returned the rental car to Enterprise in the morning.  Dave started cooking a Boston Butt pork roast.  Then we put it in our Wonderbag to cook the rest of the day.

We went back down the ICW to Lake Worth.  Back through the 5 bridges.  We missed 2 of them and had to wait 30 minutes for their next opening :(  Alice did fine with the boat moving.  No motion sickness.

We anchored in the northern part of Lake Worth again.  The pork turned out awesome!  It was so tender and flavorful. I made a rice pilaf and a salad to go with the pork.  We ate outside in the cockpit.  Beautiful evening with a full moon.

3-5-15
It was pretty windy all night.  So we decided to move the boat further south on the ICW to a more protected anchorage.  We had a relaxing morning and fed Alice breakfast in bed.  After all, she is sleeping on the dining room table. 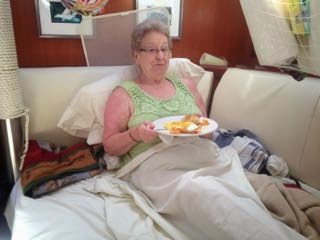 As we moved south, we passed the Palm Beach inlet.  This is where we will go out to the ocean to go to the Bahamas.  But there was all kinds of boat traffic that we had to watch for.  It was like crossroads with no stoplights.  But there are rules of the road for boats.  There were sailboats like us, power boats, tug boats, cargo ships, cruise ships, tall ships and jet skis.  Exciting!  Alice even skippered the boat today.  We heard another boat name over the radio today that we liked-King’s Ransom.
We chose an anchorage right in front of the Flagler Museum.  I had toured the museum in November with Cheryl and Bev.  It is beautiful from the water.  This was between Palm Beach and West Palm Beach.
The Palm Beach municipal docks were across the ICW.  We could tie up our dinghy for free.  While Dave was getting the dinghy in the water, a friendly boat of young women went by.  I said it was probably spring break.  Dave said it looked more like “string break” from the way they were dressed.

The dinghy ride was another first for Alice.  She had no trouble climbing into or out of the dingy.  She has spent a lot of time in fishing boats over the years.   When we were tying up at the dock, there were 2 couples that offered to help.  They were from Minneapolis!  We visited for about 30 minutes as we walked up the dock together.
We went to shore about 3:30 and walked down Clematis Street to find a Nico’s Pizza.  There were lots of restaurants with sidewalk seating.  We saw a sign on one that said “You can only drink 30 or 40 beers a day no matter how rich you are.”

After pizza, we stopped for ice cream and walked to a park where a band was setting up for their Thursday night concert.  Alice commented on how there were a lot of older people there.  Dave came back with ‘That’s all there are in Florida.  You know, it’s God’s waiting room”. 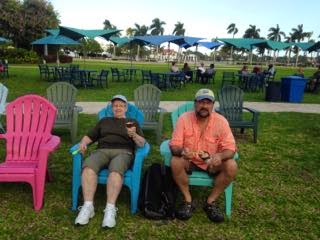 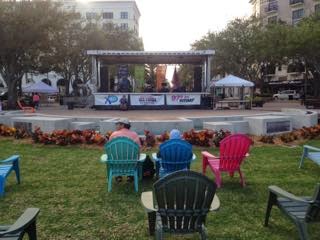 We walked along the boardwalk to get photos of our boat from a different angle.  We noticed a big yacht named Skyfall and wondered if it belonged to Daniel Craig or Adelle.  So Dave looked it up.  It wasn’t anyone we knew, but he had it built for $37,000,000.  It only slept 15 people (or maybe had 15 bedrooms), but the deck could hold 100 people for entertaining.  There were half a dozen other boats that size at the Palm Beach Yacht Club.
We were back to the boat by about 5:30.  The concert in the park started shortly after that and went until 9:00 with a country western female singer.  It was fun to listen to from the cockpit of the boat.  The full moon rose behind the Flagler museum and was beautiful.  They ended the concert with “Sweet Home Alabama”.  We adopted that as one of our songs after living there for a year.   And it was still 80 degrees at 9:00!  Before going to sleep, we heard a train whistle as it went through the city.  It was cool being anchored by Henry Flagler’s home, since he was instrumental in bringing the railroad to Florida and developing this state.  There is an amazing book called The Last Train to Paradise about his life and the building of the railroad to Key West

Posted by svluckofafool at 6:37 PM