We discussed whether we wanted to stay here a few more nights to wait out the possible bad weather, or move to a more protected area.  Dave has some things he would like to do on the boat, so would like to just stay in one place for awhile.  Being the “social director”, I would be interested in being at another island so I can go to shore and explore while he is working.  But only if it is still going to be a safe harbor.  So there is always a discussion looking at both points of view.  We decided to move the boat to Man O War Cay (MOW) about 10-15 nm south east of Great Guana Cay.  There is a protected bay at the eastern end of the island that we could check out.

We left about noon since it wasn’t far away.  The water was beautiful again.  Calm and beautiful blue and green colors.  On the southern side of MOW cay is Dickie’s Cay and Dickie’s Bay.  Dave figured this was the perfect place for him to pee overboard.  He tried giving me a lesson on “fluid mechanics and physics” as to why the pee doesn’t hit the side of the boat :(

When we arrived at the eastern harbor about 1:40pm, we went into the narrow channel, turned in and turned right around.  It was super crowded.  We probably would have had to get a mooring ball instead of anchoring.  That’s how they fit so many boats into a small harbor.  We both felt claustrophobic and wanted out of there.

We moved back west along the southern shore and anchored.  We are more exposed to the south & west, so we’ll decide tomorrow if we want to stay here or not.  We were anchored by 2:00pm.  We took some time to get everything settled, then went to town to check out the island.  As we entered the harbor, we asked some people in a dinghy where the public dinghy dock was located.  They directed us to the dock.  It was a very crowded space where you had to pin ball between dinghies to tie up.  We had a feeling this was the marina’s dock.  So after getting further penned in, we went to shore and asked, and they directed us to the public dock.  Now we had to get out of that mess of dinghies with more tied up since we arrived.  We had to back away from the dock, separate the dinghies behind us, the swing the dingy in front of us to the side and repeat a couple times until we could get out.  Whew!!. 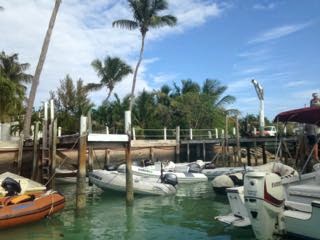 We found the public dock with lots of room to ourselves.  We walked up hill a block to “Queen’s highway” wide enough for golf carts.  We found a hardware store closed a little after 4:00.  Found a grocery store, checked out what they had and that they were open until 6:00.  Walked about 3-4 blocks parallel with the shore, saw a school, post office, a couple churches,  Albury’s wood working shop and many homes.  Back at the marina, we found the only restaurant on the island.  It didn’t open until 6:00 and they don’t sell liquor anywhere on the island.  So no happy hour.  We went back to the grocery store to pick up eggs and bread.  We found cans of Bahamian “peas and rice fixin’s” to add to rice, so thought we’d try a couple cans of that.  We thought the prices were close to those in the states.  The only other store we looked at, on Green Turtle Cay, was much more expensive.

Before we left the boat, I started a “load of laundry”.  We put all of our towels and washcloths in the bucket with soap to soak while we were gone.  Back at the boat, we rinsed the laundry and hung it to dry.  Then we had our own happy hour, dinner and showers.  A large yacht, probably 100 ft or more, anchored off shore from us, right in the path of the sunset.  They had a power boat for their dinghy.  We saw someone go over to Marsh Harbor and back in the little boat, about 4 nm away.  Maybe they were picking up the owner at the airport.  Actually, Dave had seen a seaplane land earlier tonight.  Country Western singer, Ricky Young was going to be at a bar in Hopetown on Elbow Cay near here.  Maybe it was their boat. 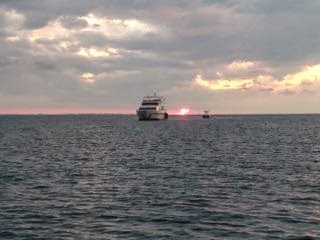 Their beautiful view was of the “live a boards” doing their laundry and showering on their back deck.  We really enjoy just sitting out in the cockpit at night.  We’re so thankful there haven’t been bugs.

Posted by svluckofafool at 7:55 PM