Beach day
After a lazy morning, we left the boat about 1:00 for the beach.  We took our dinghy to the next bay over and tied up at Nipper’s dock.  We used a stern anchor on the dinghy for the first time.  It is recommended most places here, but this dock said it was required.  Without a stern anchor, your dinghy usually floats sideways against the dock because of wave action.  With a stern anchor, the boat stays perpendicular to the dock and more boats can get up to the dock to tie up.  So it is a good system.  But you have to be careful not to motor over someone’s anchor line and get it in your prop.

From the dock, it is about a 3 block walk through the trees to the beach on the ocean side.  Or you can catch a complimentary golf cart ride, which we did because of good timing.  Nipper’s is a beach bar that in on a bluff overlooking the ocean.

We walked down the beach to the south towards a good place for snorkeling.  We left our pack on the beach with our phones and some money and just trusted that no one would take it.  We thought we’d just look up once and  awhile.  But we wouldn’t have been able to identify anyone we saw from the water.  We left it in front of a home on the beach, so maybe people would think someone was watching from the house.

We snorkeled south from there following a reef off the shore.  I saw 2 angelfish, my favorites, so I was happy.  The reef consisted of all kinds of coral.  Most of the fish we saw were small.  There was another reef a little further off shore, so we followed that back to our starting point.  We were hoping to see something big on the ocean side of that reef, like a shark or stingray, but no such luck.

After about 90 minutes in the water, we walked back to Nipper’s.  There were a lot of people there on their multi level decks.  On Sundays they have a pig roast.  It is $26 for all you can eat in a buffet.  It was great!  There was chunks of pork plain with a au jus, BBQ pork, rice and beans, mac and cheese, corn, mixed fruit and a dense corn custard.  Their mac and cheese is made with something to thicken it, because it was dense, too.  It was served more like a piece of cake.

This was a great place to “people watch”, too.  All kinds of people and all ages.  The music started with what I would call current music, but about 4:30 it changed to “oldies” from the 60”s-70”s.

We left about 5:00 and caught the shuttle back to the dock.  At the dock, we saw someone we had met in Green Turtle Cay.  They were at the parade and we played pool with them.  They were shuttling some people back to a large catamaran and were going to have to make another trip for one of them, Vee.  So we gave her a ride in our dinghy to her boat.  I guess she and Ron captain and crew/cook for charters.  She said they had 8 guests on the boat.  It wasn’t clear if that was their boat and they do that for an income, or if they are just hired by a charter company to captain the boat.

Once back to the boat, we rinsed the sand off of EVERYTHING on the swim platform.  Then showered off the stern again.  It was nice not to track the sand into the boat.  I enjoyed a beautiful sunset while checking Facebook.  Dave tried to get some things updated, but the wifi was too weak to get much done.

I had read about Nipper’s and the beach.  It turned out to be a great place to visit.  I was really wanting to go snorkeling, so I was pretty happy. 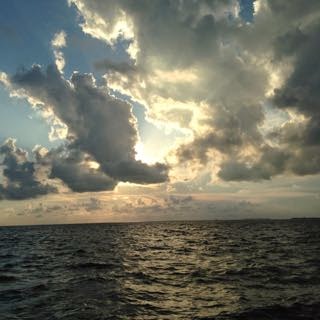 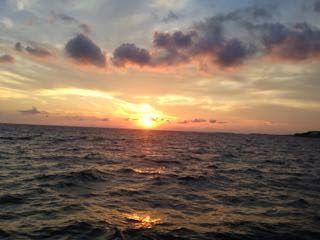 Posted by svluckofafool at 7:47 AM