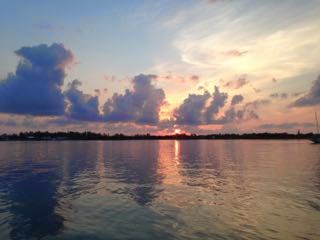 We thought about leaving Green Turtle Cay this morning, but thought of a few things to do instead.  That’s what we love about this life

I was up early this morning, 6:00 am.  I wanted to schedule our son’s flight to join us in May and the internet has been so slow during the day.  I was hoping there weren’t many people using it this morning, and I was right.  Otherwise we were  going to go into New Plymouth for breakfast and use the wifi at a restaurant.

I wanted to buy a guide book of the Bahamas to start making plans for what we want to see and do besides boat projects.  But I started digging through all of our books and found what I needed.  Dave had bought a guide book just for the Abacos (this group of islands) back in 2005.  And we had bought a Waterway Guide to the Bahamas in 2014 at a West Marine somewhere along the line.  And we had Skipper Bob’s  Bahamas Bound.  So I started familiarizing myself with the different islands.

Dave started out the day fixing the handle on one of our port lights.  The one in our forward head just came off as he was closing the window.  So he had to get out his  2 part marine epoxy.  He used the 5 minute set because he doesn’t have the agility necessary for the 1 minute set anymore.  This had to dry 24 hours, so that is one reason we didn’t leave today.  Water can splash over that window and leak inside if it’s not closed tight-batten the hatches.

While Dave was out on the deck, he saw the weekly cargo ship bring supplies to the island.  Someone had said Thursday was when the new produce would be here.  Maybe we will be able to pick up some fresh fruit before leaving here, if the price is not outrageous.

After that, Dave went to work emptying our jerry cans of diesel fuel into the fuel tank.  He then took the jerry cans to a dock in the dinghy to fill them.  The entrances to the bays here are pretty shallow,  So we didn’t want to risk taking our boat in for fuel,

By  now it was 11:30, and we noticed the first day here that most everything closed up over the noon hour.  So while I had Dave’s attention, I drew out a calendar of the time we will be here all on one sheet of paper.  Then I penciled in possible visitors.  From there we made a loose game plan of where we want to be when.

About 1:00, Dave took the jerry cans and the dinghy to find fuel.  He took the hand held VHF radio with him so we could practice communicating that way.  He can “hail” me on channel 16.  Then after I come back, we move to a different channel.  There are certain channels designated for conversation.  But you are always supposed to keep it short and sweet, so others can use it, too.  Channel 16 is always kept open for contacts and emergencies.  We have heard people get reprimanded for carrying on conversations on channel 16.

The fuel dock in Black Sound Bay was out of fuel today.  So Dave went to White Sound, where we had lunch yesterday.  No one was at the fuel dock, so he went down the dock to the “store”.  The lady said there wasn’t anyone at the end of the dock to help him, so he should just bring the cans to the building and use the pump there.  Well that’s fine when they are empty, but he had 4 cans that hold 5 gallons and get pretty heavy when full.  Plus he had a 5 gallon and a 2.5 gallon jerry can for gasoline.  Diesel jerry cans are yellow and gasoline jerry cans are red.  And if you carry cans for water, they are blue.  Dave even said that diesel was heavier than gasoline.  I never would have thought of that.

Well, the pump took several times of talking to the lady inside to finally work.  Once he had the cans filled, there was a line of people wanting to buy ice cream.   Then the only lady working, had to fill up a golf cart (used a lot here for transportation and are for rent).  In the meantime, a custom’s agent was asking Dave if he had seen a certain boat.  They needed to finish some paper work.  Dave hadn’t, but offered to find them, or better yet, take him to the boat.  He just left the cans of fuel sitting on the dock without paying figuring no one would steal them.  He helped the custom’s agent find the boat and brought him back to the dock.  He wanted to pay Dave for the fuel, but it was negligible.  So he gave us a blessing on everything imaginable, the boat, the dinghy, each of us, our marriage, etc.

Dave paid for the fuel, lugged it to the dinghy and made it back to the boat in 2 HOURS!  That’s island life.

Dave spent some time this afternoon tending to our radar reflector.  It has pieces of metal that criss cross in the shape of a ball and hangs on the flag halyard on the port side.  He tied it to a side stay to pull it away from the halyard and  keep it from rubbing.  And he also taped the halyard in the area where it rubs to keep the halyard from shredding.

In the meantime, I turned on our inverter so I could use an AC outlet for our computer.  It needed charging after booking a flight this  morning.  But I wanted to finish filling out our provisioning spreadsheet.  During the day, when there is plenty of sunshine, is a good time to use the inverter for power.  The solar panels can replenish the power I am using.  I am hoping that this provisioning list will help us in the future when stocking the boat.

I poured over some more books for awhile before getting dinner ready.  We used our grill for the first time in a long time.  We really need to eat the food in our freezer to make  room for the fish we will catch, when we eventually start fishing.  The lobster season ends 3-31-15.  We plan to go snorkeling in the next couple days, so maybe we’ll be able to get one.
We tried our first Bahamian rum tonight.  It’s made in Nassau and was pretty smooth.  It was a dark rum called Ole Nassau.  We mixed it with orange juice and it was refreshing.
After dinner, we both put on swimsuits and showered on the swim platform again.  Great way to cool down after a hot, sweaty day.

Posted by svluckofafool at 7:42 PM