We decided to head north today after Dave went to shore one more time.  We thought we should buy two 5 gallon water jerry cans to have on board just in case we can’t use our generator to make water.  We would use them to haul water to fill our tanks.  Top II Bottom was supposed to bring them from their larger store further away.  They didn’t, so it was their loss.  We’re leaving without them.

Dave took a bag of garbage to shore with him to dispose of for $2.  As he was headed to the dump truck, he saw another boater that he thought he had met earlier and said hello.  It wasn’t him, but this boater had a larger garbage bag.  The boater suggested that Dave could put his bag inside his large bag because it’s only $3 and they’d each save some money.  So Dave gave him his $2 he would have spent anyway.  Then Dave said, I’ll carry the bag, since the boater was hanging on to the money.  Dave thought the boater would follow him, but Dave turned around and he was gone.  So Dave had to pay the $3.  Now his $2 bag just turned into a $5 bag since he also gave the boater $2.  He laughed at the situation and went on his way.  He found out after this that he couldn’t get the jerry cans.  So he headed back to the dinghy dock and the same boater was getting water from the free faucet.  Dave started a conversation with him again about not being able to get jerry cans, thinking he would say “hey we screwed up on the garbage and I owe you money!”  but nothing was said.  So Dave brought it up.
Dave: hey, by the way, I just paid $3 for the garbage after giving you $2.
Boater: oh yeah, well here is a dollar back.
Dave: So…. that means I just paid $4 for my $2 bag of garbage
Then the boater wanted to give him $3 and it was getting more comical because it was such a simple mathematical problem and the boater just couldn’t figure it out.
Boater:  (jokingly) you took the bag, so it’s your fault
Dave:  That makes me CEO of the garbage and I can make the rules
He ended up giving Dave his $2 back and $1 more.  So in the long run, Dave paid the $2 he would have on his own, the boater paid $1, and Dave carried the garbage.  “Who’s on first?”

We ended up leaving at about 11:00.  There was a light wind in the harbor.  It took about an hour to get out of the harbor because you have to go north a ways to get around Stocking island.  The wind was better but from our port stern, so Dave put out the gin pole to hold the genoa sail out to the side so the wind would push us from behind.  Well, the wind was stronger than he had anticipated and I thought for sure that he was going overboard.  I didn’t know whether to laugh of cry.  But he made it.

This morning on the net, there were about 15 boats that said they were leaving the harbor.  There were 6 that were going to cross the Atlantic together.  How exciting!!  We wish we could have been in on some of their planning to see what was all involved.  So, a couple hours after leaving, a boat coming up behind us hailed us on the radio.  He was from Georgetown and was on a trawler, a motorized boat.  He was just wondering if we were staying on course because he wanted to pass us.  Dave assured him we were and said to look for our wave as he goes by.  Well as he went by, Dave grabbed his hat off of his head to wave at him and it was attached to his shirt with a hat clip so it doesn’t blow away.  Well that ended up pulling up his shirt and making a goofy wave.  They guy was probably happy to be out of our path.

We had been watching some dark clouds north of us and watching them move east.  We thought they would move fast enough that we would miss them.  But about 3:00, the wind changed 180 degrees and was now coming from the north at 20 mph and much cooler.  So we brought in the sail and put up our side curtains to protect us from the wind and rain.  We only had some light rain right away.  We turned into a cut about 5:00 to anchor for the night inside the island of Lee Stocking.  Now it started pouring rain and Dave had to go out on the bow to set the anchor.  It started to let up just as we finished anchoring.  And we were treated to a full rainbow.  It was so big, I couldn’t get the full rainbow in one photo.  And when I looked at the photo later,  I saw a double rainbow in the photo.  Dave said he didn’t see the double rainbow at the time, either.  Beautiful, quiet anchorage with only one other boat. 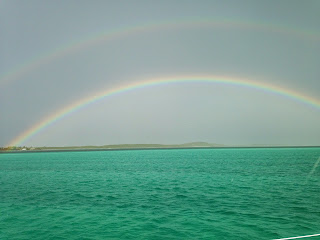 Dave had a fishing line out all day.  And after anchoring, he spent about a half hour casting.  Pretty soon he said “I guess you better not count on me providing supper.”  That’s when I told him supper was ready and brought it outside to enjoy the evening.  I’m not planning a meal with fresh fish until I see it IN the boat.