Yeah!!  The sun was shining again today.  This was our chance to go to shore and finish up any business before heading back north.

After docking our dinghy, we walked to the hardware store, Top II Bottom, to get a hose for Dave’s back up pump for the generator.  While he was there, I walked across the street to shop at the “straw market”.  It was a large tent with about 10 different venders selling t-shirts and other souvenirs along with straw baskets and purses that they were making.  I tried on a few straw hats with some color because Dave thinks my beige hat with a big brim for sun protection is ugly.  After looking at a few with Dave, we decided all I needed was a little color on my existing hat.  So he is going to braid me a cord to put around the hat brim.

Since it was now lunchtime, we had lunch at the Red Boone cafe.  You order at a counter and eat outside.  I had a chicken sandwich, but Dave tried their conch burger.  This time the full conch was tenderized, battered and fried.  It was tasty, but I think I liked the one where it was chopped and made into a patty better.

Then we went to J&K Productions to spend some time on the computer.  Dave wanted to update our laptop and update our navigation charts.  I ended up doing some updates on the mac and our phones and iPad.  Then I spent some time researching places for company to stay in the Abacos next winter.  I had fun checking out various vacation homes. 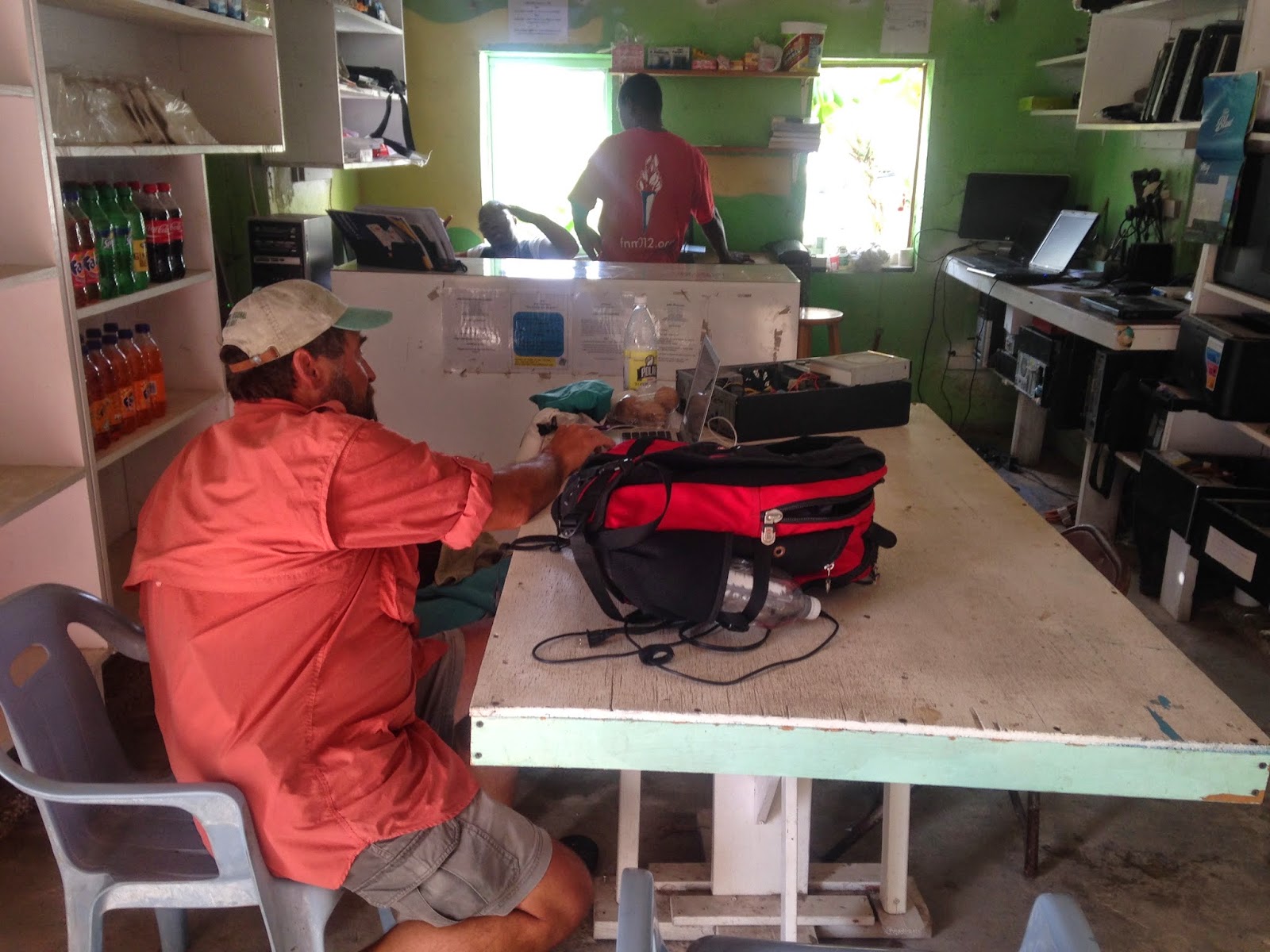 Dave also was able to use their phone to call his mother for 20 cents a minute.  He was used to talking to her several times a week.  So they had a nice chat.  She was really surprised and enjoyed hearing from him.

We passed a couple of stands where men were selling produce.  We saw something new to us and asked about it.  It was a saparillo.  It looked like a cross between a brown potato and a kiwi.  They let us try one.  The fruit was very sweet.  So we bought 4 for $2.  They said to wait until they are soft and ripe to eat.  If you put them in salt water from the sea and then in a plastic bag, they will ripen faster.  Dave asked if that was true or if they just tell that to all the sailors and then laugh behind their backs.  They laughed with him.  I never know how people will respond to his sense of humor.

We took everything back to the boat before Dave returned to fill fuel jerry cans with diesel.  I have a “dry bag” that is a back pack that I put the mac computer in wrapped in a towel for protection.  Dave has a regular backpack with padding that he put a laptop in.  But in the dinghy, he put his whole back pack into a heavy garbage bag to protect it from water in the floor of the dinghy, or spray.  Heaven forbid, anything would go overboard.  It’s always scary taking the computers to shore.

We had dinner outside just after the sun set.  We looked across the harbor to another anchorage.  There were about 15 boats with their anchor lights on.  Dave looked at them and said they lined up as if they were musical notes.  Then he began to sing a tune moving up and down with the heights of the masts as if they were notes going up and down.  I just sat there shaking my head.  That is until the mosquitoes started to attack.


Posted by svluckofafool at 7:12 PM