I started 2 loaves of bread last night and let them rise overnight.  So I was busy baking this morning.  Also made Brownies for my son (box mix) :)

Dave and I started discussing a plan to get rid of some stowaways on our boat.  We have seen about a half dozen cockroach type bugs over the past month.  Dave and I have been planning our attack.  I know all of our food is bagged and protected, but we just don’t want them on board.  I told Dave that if they were crawling on the cupboards or in our dishes, I would want the boat fumigated.  I went to the dish cupboard and found one inside a clear glass.  YIKES!!  So far I haven’t taken the time to look at them, only squish them.  So we had this one trapped and could study it.

Dave got online to find out what it was for sure.  And yes, it is a cockroach.  They weren’t native to this area but came over with boats.  We’ve only tied up to a dock once since we’ve been here and I saw our first one before that.  So they flew to our boat or came in with the groceries.  They didn’t seem to run from the lights, so I wasn’t sure they were cockroaches.  I guess even the bugs are laid back in the Bahamas.

I found my stash of ant and roach killer that I bought when we first moved aboard in Alabama.  I was surprised at the arsenal we had on hand.  The cockroach in the glass was trying to crawl up the walls to get out without any luck.  We sprayed Raid into the glass and covered it.  He kicked it into high gear, then turned over on his back and died.  You always see pictures of dead roaches on their backs, and it’s true.  You should have heard me yell “YES” and do a victory dance.  We went to work putting out 6 sticky strips that had a pesticide they take back to their nest with them to the “henroach”.  We used the spray into areas we couldn’t reach.  But we don’t want the liquid going into the bilge if possible.  If we end up spraying, we’ll wash the bilge again.  Dave likes to be able to taste the water in the bilge to see if it’s salt water or fresh water to help track down the source.

OK, Ron and Libbo, or any other sailors.  We are waiting for your experiences and what to do that could be more effective.  Or what to do to prevent them.  I have been slacking off on washing my fruit.  The eggs can be on them, especially bananas.  So I did that right away with the fruit I bought yesterday.  We keep everything as clean as we can and bag all foods.  And we don”t bring cardboard onto the boat.

We are going to see what happens over the next couple days and use more of our arsenal as needed.  Worst case is having the boat fumigated.  So we’ll see.

This has been a fear of mine since moving aboard and living in tropical climates.  Only thing worse would be to find a snake aboard.  And I’ve heard that can happen.

By the way, the bread and brownies turned out great.

We decided to see if we could extend Pete’s flight so he could be here at least a week.  He said he had to be back Saturday, May 23.  So I went online to to American Airlines but I couldn’t make the changes online because there was an international flight.  I had to call them.  We discussed our options for using a telephone.  And then Dave came up with the idea of having a travel agency help us.  So I sheepishly sent an e-mail to friends in Rapid City.  Moderick’s sold their agency to Bursch Travel.  And the mother of Pete’s high school friend works there.  She was happy to help us even though we originally booked the flight online.  So if anyone can give Gloria and Bursch travel any business, I would recommend them anytime.  It took her most of the afternoon to get through to American Airlines on hold.  And we were able to extend his stay 3 days.  I was really glad we didn’t try to call since we would have been on hold forever.

We had thought about going to shore to just see more of Nassau, but now it was about 5:30.  So we just finalized getting the boat ready to leave tomorrow.  So far, no sign of any bugs!! 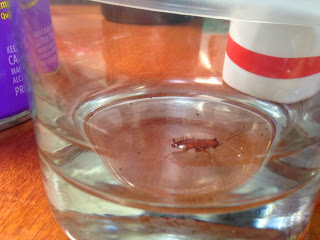 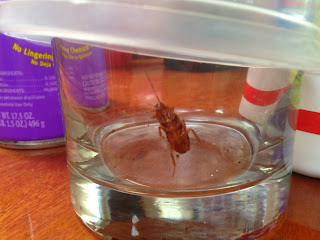 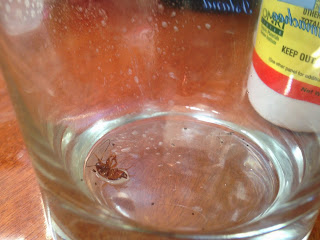 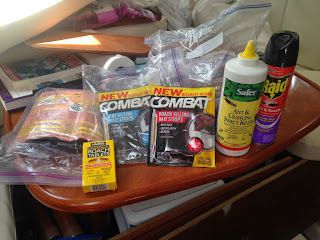 I  can think of a couple people who will never set foot on our boat after seeing this.

Posted by svluckofafool at 12:19 PM