We set up the car rental this morning with Favor’s Service Station.  Jason said he would meet us on shore where the road to the settlement reached the beach.  We haven’t been there, but figured we’d find it.
We loaded up our empty fuel cans, our garbage, and backpacks for groceries.  Jason met us at 10:00 with a Honda CRV, similar to a 4 door chevy blazer.  That was perfect for all of our plans.

We drove back to the station and signed paperwork, paid our $75 and were off.  No discussion about insurance or the condition of the car.  He said he knew which dents and scratches were already there.  The rental was for 24 hours, or we could return it before 6:00 pm, when they close.
Our first stop was to drop off our garbage in New Bight.  Then we drove to the bottom of the hill to hike the Hermitage.  Last time we were here, we had to hike over a mile from the shore.  And that was before replacing my knees.  This is such a great hike.  The Hermitage is on Comer Hill, the highest point in the Bahamas, 206 ft.  It is the where Father Jerome built his retirement home.  Father Jerome had spent time in the Bahamas around 1910.  But he returned to Cat Island in 1939 and began to build the Hermitage.  He lived there until he died in 1956.

The last part of the hike can be done by a path that rounds the hill, or up a climb though depictions of the 14 stations of the cross.  It is truly amazing when you think of how he did this on the mountain top.  In the chapel, I found a prayer book of the stations of the cross that I used as I grew up in Miller, SD.  I am sure my siblings and many other Catholics will recognize this book.

As you walk through his home, you would think he lived here 200 years ago.  There is no running water, electricity, or heat for his home, even though he lived in an era where those things were available. 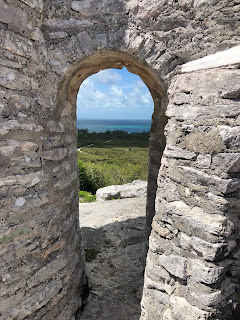 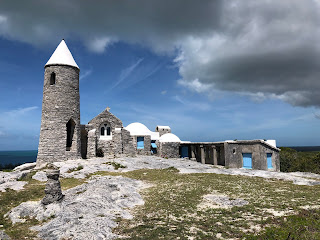 We were glad we made the trip here for the second time (first was 3 years ago).  There is an awesome view, and it is so peaceful.


Our next plan was to do a little sight seeing.  We need to get fuel and groceries, but we will plan that for the end of the day.  There is only one road that runs north west and south east the length of the island.  So we headed north west.  We drove into a couple resorts to check them out.  One was just being built and had a long ways to go before we could imagine anyone staying there or buying a condo.  Fernandez Bay Resort has been there a long time.  From the land side, we weren’t impressed with this one either.  I guess people that come to Cat Island are looking for a remote experience.

We drove past the grocery store and were glad we weren’t walking with the groceries back to the boat.  We also found the airport, pretty simple.  We stopped for lunch at a restaurant along the road called Triple D’s Restaurant.  When Dave’s Dad had a second hand store in Watertown, SD during Dave’s high school years, the store was named Triple D’s, for Dad, Dave and Dean.  There was a bar and several empty tables.  There was one lady working behind the bar and a friend of hers at the bar.  We looked at the menu on the wall to order, but were told that they had one thing thing on the menu that day.  It was conch and rice, pork chop, potato salad and corn.  So that’s what we had.  My gosh, it was full plate of food for about $12 each.  What a great find.

Next we drove north and when we came to Bennett’s Harbour, where we had anchored earlier, there was a big kid in a school uniform hitch hiking.  So we stopped to give him a ride.  We found out that Ethan was an 8th grader, but looked like Michael Ohr, the football player in the Blindside movie.   He even said he would like to go to the states and play football someday.  Ethan’s school was is Arthur’s Town, about 5 miles north.  He had left something at home and hitch hiked home to get it over his lunch hour.  We got him back right when the bell rang to end the lunch period.  It was fun meeting him and asking him about his school and a little about the island.
On the way back, we stopped in Bennett’s Harbour at Yardie’s for ice cream.  We had read earlier that this was the local restaurant.  It was more like a gas station/convenience store that also served food.

Next we looked for a road that would take us to the east side of the island for an island/beach view.  We finally found a road that went to a Beach resort.  It was 1.5 miles of a really rough road.  There were a few homes along the way, but not much else.  If you were staying at that resort, you probably wouldn’t leave for the whole week.  I couldn’t imagine driving this road daily to go anywhere.  We were just hoping we didn’t get a flat tire or hurt the suspension.  I got my quick view of the ocean, but no beach access, so off we went back across that crazy road with our fingers crossed.


Back on the main road, we stopped at a local basket stand, made by the people that live next door.  I wanted to pick up a basket for a wedding gift and found the perfect one. 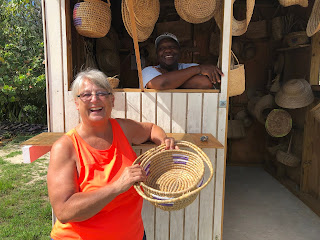 Next stop was for groceries.  The store was fairly well stocked.  We were able to pick up some fruits and vegetables.  The milk was $11/gal, eggs were $4/dozen, and the luxury of diet coke as a $1/can.

Back at Favor’s Service Station, Dave topped off the gas tank and filled our gas and diesel jerry cans.  I repacked all of our groceries into water proof back packs for the dinghy ride home.  Jason’s grown daughter had a beauty shop in the service station.  She gave us a ride back to the shore.  She was amazed that we could get 4 fuel cans and 2 backpacks of groceries in the dinghy along with us.  Actually, this dinghy is a foot longer that our old one, so we think it’s huge.

We had to drag the dinghy a little ways to the water, since it was low tide.  We made it back to the boat fine.  Unloaded and had cereal with our fresh milk for dinner.
Posted by svluckofafool at 2:07 PM