We spent this week outside of Spanish Wells doing “boat chores”.  We did laundry a couple days.  And that means we had to make water a couple days.   When the generator is running for the water maker, the computer can be powered for me to catch up on this blog.

I spent time cleaning for one last guest.  Devyn Killion will be here Friday.  I was also doing some meal planning trying to use the last of our provisions.

Dave used the Airline Hookah system to change the zincs.  They were probably half eaten away, but Dave changed them anyway.  We plan to head back to the states after Devyn leaves, so this job is over while we are in clear blue water instead of back at a marina in the states.  He also greased the prop.

On Thursday, Dave climbed the mast to change the LED festoon light bulb, which we believed burned out during a lightning/thunderstorm.  He often does this by himself, but I helped today, which made the process go a little faster.  Dave wore a climbing harness today.  Sometimes he uses a Bosun seat.  He used 2 Jumar ascenders on the same rope.  One Jumar was attached to the harness, the other was attached to 2 webbing step ladders, one for each foot. First Dave moved the harness jumar up the rope, sat back in the harness, then moved the other Jumar up the rope to to move his feet up.  Then he stood up straight, which put the weight on the second Jumar and allowed him to move the first one up the rope again.  This moved about 6-8 inches at a time, and the mast is about 50 feet off the deck.  All the while, we watched for possible squalls on the horizon.  We also had an occasional boater pass by, which made the boat AND mast sway.  He had a second line attached to his harness as a back up.  I was keeping tension on that line in the cockpit around a winch. 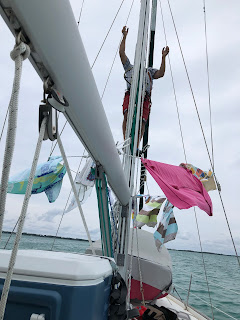 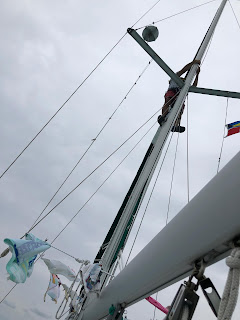 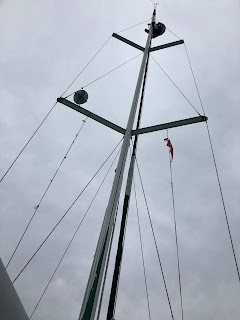 Part way up the mast, he realized he had left his parts/tool bag on the deck.  Once he reached the top, he sent down the backup halyard to me.  I attached the bag and hauled it back up.

Dave cleaned the contacts and old the bulb worked. He used contact cleaner files, and sprayed anti-corode goop called No-oxide.  When he was finished, I lowered him using the winch as friction.  Otherwise it would have been the reverse action of 6 inches at a time.

We have been very happy with all the LED lights we have on the boat, which we bought from Marine Beam.  The anchor light and the bow lights were new in 2015, after a lightning strike.  And our LED lights inside the boat were new in 2013.

We always need time in paradise to do the routine chores.  One more week of playing, then it’s back to the states.   AND we finished all of the Avengers movies up to Avengers 4/ Infinity Wars.
Posted by svluckofafool at 12:44 PM