March 26, 2022 Passage from Abacos to Eleuthera and mahi mahi with Doerr's

We were up early to make the 10 hour crossing to Eleuthera today.  Dave checked the oil before going off shore today and the indicator was dry!!  He checked it 6 times and finally decided to add oil, which seemed strange.  Your mind starts thinking of all the reason we could have lost oil or used so much oil.  As he was adding the oil, it overfilled!  He stopped, checked the indicator again and it now registered full.  He must have had to prime something for the oil to reach the indicator.  Now he had to clean up a bit of an oil spill before we could leave.  Needless to say, we didn’t leave with the group of boats heading south this morning, which is alright by us.
We left about 8:00am.  The seas were calm for the first time in over a week.  Great day to cross south about 60nm.  We average about 6kn so figured it would take us 10 hours.  We shut the engine off about 9:00 and just drifted while Dave removed some of the excess oil he had added earlier.  The winds were actually too calm to even sail today.  Since the water was so flat, not fighting waves, were were making 8kn.  That’s exciting for our boat. 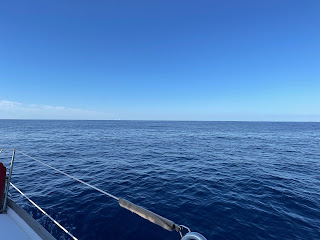 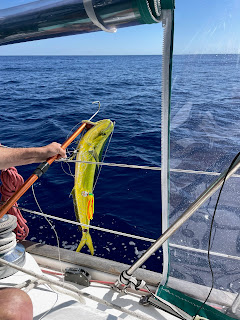 We had enough wind to sail now and were moving at 8.5kn.  Great day and so peaceful without the engine running.  We only had to change course once to let a cargo ship pass in the shipping channel.  The Northeast Providence Channel (which we were crossing) is a major shipping channel from the southern US to the rest of the world.
Dave was able to clean the mahi while we were underway.  That was a first.  It was going to be several hours before we anchored, so we were able to get it refrigerated.  We also had a great lunch of mahi stir fried rice. 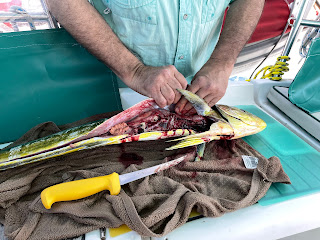 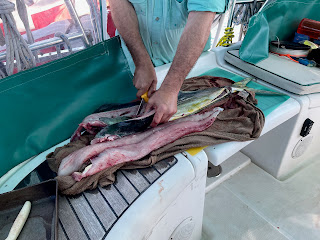 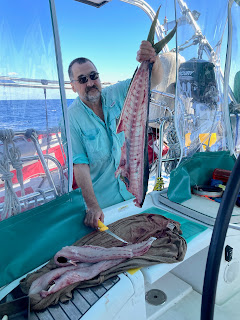 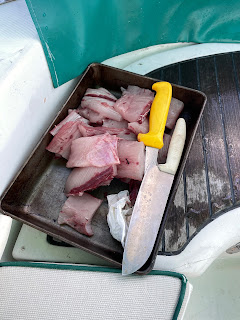 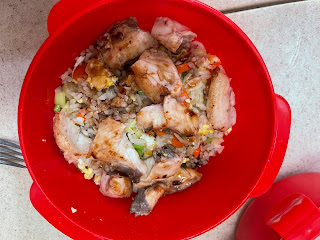 We were pretty exited to see land by 2:00.  We went through the Egg Island cut at 3:15 and continued on to anchor outside of Spanish Wells.  We did that passage in 8 hours!! Record time.  We were amazed to see about 30 boats in the anchorage.  Usually we see about a dozen.

We had friends from South Dakota, Harold and Juli Doerr, that were going to spend about a week in Spanish Wells in a cottage.  We were all hoping weather would allow us to join them while they were there.  We thought we’d get in later today and weren’t going to see them until tomorrow.  But how can you not share fresh caught mahi with an avid fisherman like Harold.
We were anchored near Ali-cat, friends from Brunswick, GA.  We stopped to visit them on our way into town by dinghy.  The boating world really is a small world.
We gave Doerrs directions as to where we would tie up our dinghy.  They picked us up in the golf cart that came with their cottage.  They had just arrived today.  So we took them on a quick loop though Spanish Wells on our way back to their cottage on Russel Island, attached by a bridge.  We had an awesome dinner and drinks.  They couldn’t get over how fantastic the fresh mahi tasted.  It was fun to treat them to it.  They took us back to the dinghy about 8:30.  Your nights end early when you have to dinghy back to your boat in the dark.


Posted by svluckofafool at 6:16 AM