Jan 28
We had a small group for our Ladies Luncheon in January.   They waited until I came back from Oklahoma. 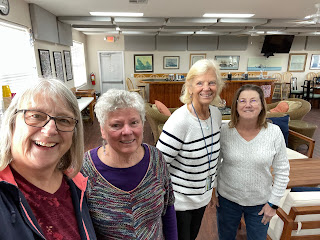 Dave's work on the bimini and dodger during January.  Here area  few photos to show his progress

First photos are patterning the side curtains for the bimini 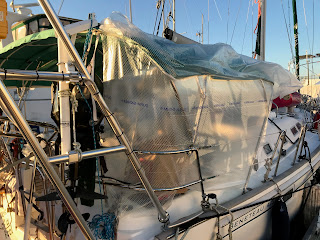 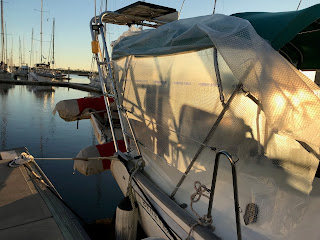 Then he used the patterns to cut the isenglass.  He was able to use a counter inside the clubhouse 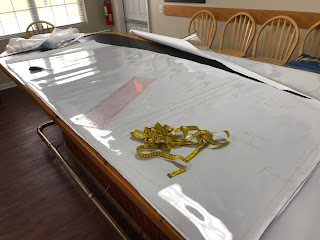 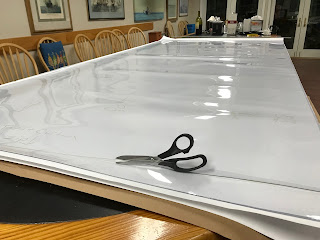 Sewing the isenglass and adding zippers 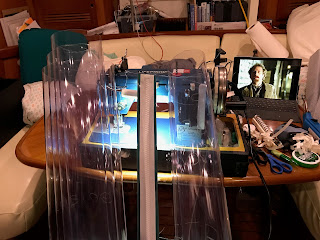 checking the fit as he goes 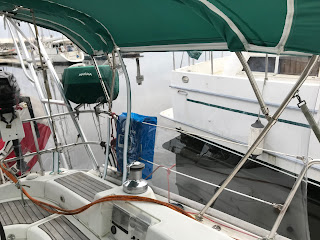 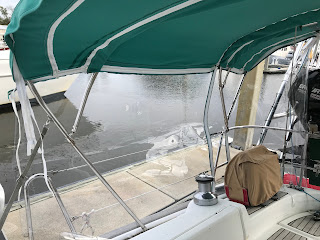 Feb 5 There was a commissioning of a Naval ship at the dock south of our marina.  There was a viewing area at the city park set up of the “non dignitaries”.  The US Navy commissioned the Littoral Combat ship USS Savannah.  The Savannah port was too busy, so they brought it here.  It was interesting to watch as they raised flags and and boarded the ship.  When the crew was given the command to board the ship, they all ran in a line to the ship and up the gang plank onto the ship.  Must be a tradition.  Here is an explanation of the Littoral Combat Ship.  “The LCS is a fast, agile, mission-focused platform designed to operate in near-shore environments while capable of open-ocean tasking.  The LCS can support forward presence, maritime security, sea control, and deterrence.
We remember seeing these built in Mobile, AL  by Austal USA when we lived there in 2012-13.  They are a trimaran, which means there are 3 hulls.  They are designed for speed and being about to make faster turns than larger ships.  Very interesting to see and watch the commissioning. 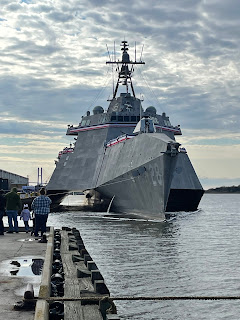 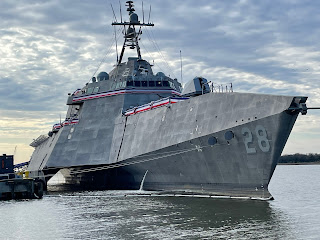 February 10
Today I celebrated my 66th birthday.  Since I have been on a low carb diet for a couple years, my carb of choice today was breakfast cereal, Raison Nut Bran to be exact.  I don’t miss cake and other desserts.  I have found low carb beer and liquor.  But we have missed breakfast cereal, so we splurged today.
I continued to splurge by going out to lunch with a couple of friends.  They took me to an Italian restaurant on St Simon’s.  I had pasta and Tiramisu, yummy! 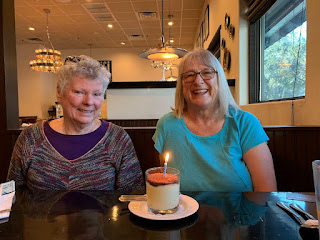 That evening, Pete and I joined other boaters at the Silver Bluff brewery downtown Brunswick which is walking distance from our marina (Dave wasn’t feeling well).  There was a Mexican food truck with great food.  After eating, Pete and I went to Tipsy McSway’s a block away to hear a musician that Pete knows.  He asked Pete to come up and sing a few songs.  That was an awesome birthday gift, to hear Pete sing.  So proud of him.  He discussed St Patrick Day plans with the owner and they want him to sing that night! 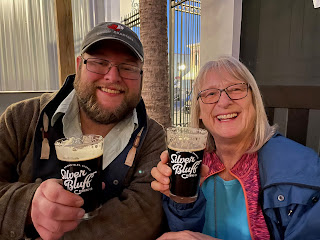 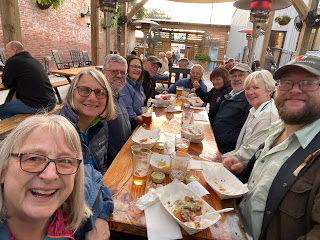 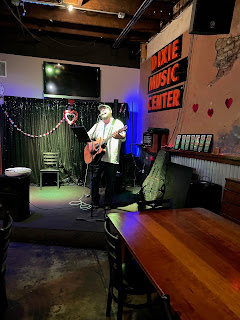 Feb 13. The marina had a super bowl potluck party at our clubhouse.  There were close to 30 people there.  I decided to set up a pool for $0.25 a square giving the winner $25.  It was a fun night even though the Packers weren’t playing. 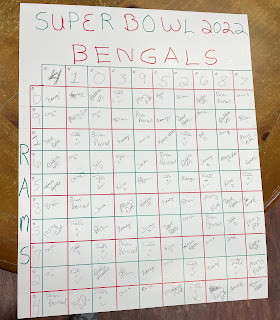 Feb 14 We had a nice dinner onboard for Valentine's Day with German wine, pâté, cheese and low carb crackers to balance the carbs in the wine lol.  As you can see by the sewing machine on the table, we are working on finishing up the sewing for our bimini and dodger. 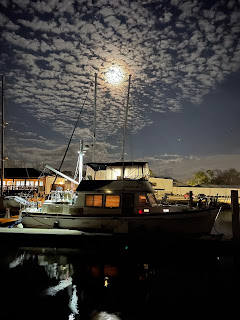