May 29, 2016 Russell Island and passage preparation

We listened to the Chris Parker again this morning.  The wind was going to be “light and variable” for a few days,  which means we would have to motor instead of sail.  So we decided to take a day to get the some things taken care of on the boat rather than head out for the Berry Islands.  We get an e-mail from Chris Parker everyday except Sunday with a weather report.  We were having it sent to our regular e-mail address, which we can’t access is remote places without a Bahamian telephone tower signal.  So it dawned on Dave this morning to have the e-mails sent to our sail mail address so we can receive it on our Single Side Band radio.  Boy, it takes a few years to work out all the wrinkles in your systems.

We said our good-byes again to Phil and Teresa via the VHF radio.  They were heading back to Meeks Patch Cay closer to Spanish Wells to wait for their boat to be painted.  Obviously, we weren’t leaving for the Berries today, or we would have already left.  We told them we might move to Russell Island on the south side of Spanish Wells to pick up some wifi before we leave.  They told us about a place called the Sandbar, where you can anchor off it’s beach and pick up their wifi.  And they had the password :)

Dave spent the morning cleaning the raw water screens for the engine, the generator and the water maker.  I decided to make more bread.  This time, I stirred raisins right into the dough.  We had picked up an average container of raisins, 3.5 cups I think, for $10.00!!  But one loaf of homemade raisin bread is $6, so we decided to splurge.  Actually, I don’t remember what I pay for them in the states, I just buy them.

As the bread was rising, we decided to move the boat to Russell Island.  It was only about 7nm away which takes about an hour.  And we had a light rain along the way.  We weren’t really sure where this place was, but knew it had a beach.  So as we headed towards a beach, I pulled out our computer and our wifi booster to see if I could pick up the Sandbar.  Sure enough, we had the right place.  And there was Phil and Teresa anchored there, doing the same thing. 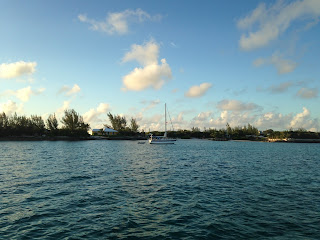 I decided to make one loaf of cinnamon bread and one pan of caramel rolls.  I made the caramel from memory like my mother’s.  We have cans of Media Crema on the boat, which is a table cream.  So I used one of those for the caramel along with brown sugar and butter.  I don’t think you can go wrong with a combination of those ingredients. 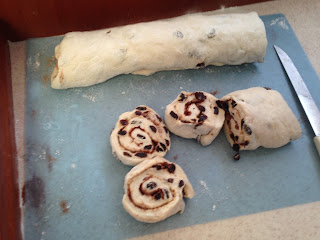 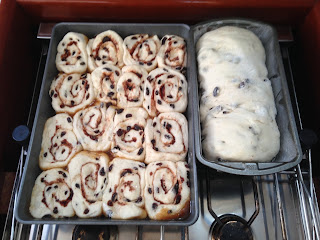 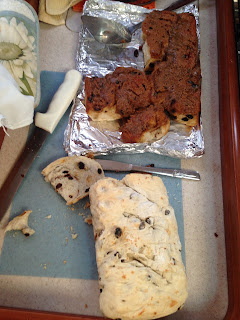 As I did some updating on the computer, Dave was busy organizing things.  The remote that controls the windless had a loose wire.  The last couple times we have anchored, Dave had to hold it in just the right spot to get it to work.  So today, he took it apart, found a broken wire, cut off a few inches and soldered the wire back to the circuit board.  What a guy!

He moved the 4 gallons of precious, expensive boat paint to the aft cabin.  They are in a tote to catch the paint should something happen to one of the cans.  Then he made sure it was on the bottom level of totes that are stacked in the aft cabin (garage), so they will be more settled as we heel the boat.

We have a replacement snubber in one of the totes in our “garage” that Dave has been looking for.  He looked through 2 totes, got distracted, and forgot to look further.  Hazard of sailing when you are over 60.  He also put away the hookah system.  It gets tucked into the garage.  Plus all the hoses have to be put away.  Everything in it’s place.  I read somewhere that arranging things on your boat is similar to working with a Rubik’s cube.  That is true whether it is in the garage, the galley, the lazarette’s and even your one drawer for clothing.

When the caramel rolls were done.  Teresa came over by dinghy to pick up their treats (we had our dinghy on the davits for the passage).  I gave them 4 caramel rolls and a couple slices of cinnamon bread while everything was still warm.  They each made a call on the VHF radio to thank us.  They thought they had “died and gone to heaven”.

We headed back to Egg Island to save us some time in the morning.  It was dark by the time we anchored on the West side.  We kind of knew what the bottom was like, so Dave used a flashlight and found us a good spot to anchor. 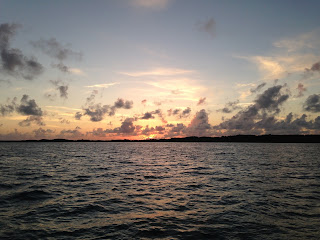 Posted by svluckofafool at 8:08 PM