After a sleepless night, we decided to move closer to Spanish Wells for protection from the changing weather.  It was only about 10 nm.  So we motored there in about 2 hours.  We
anchored outside the south channel into Spanish Wells by 11:30.  We didn’t want to take our boat into their crowded harbor.  This is an active community with fishing fleets.  They provide a lot of the fish and lobster for the Bahamas.  The harbor is basically a channel that runs north/south then east/west with heavy traffic of barges, fishing boats, ferries, and personal boats.

We decided to check out the town.  We needed to find the grocery store, diesel, propane, hardware store, and meet Robert at R&B Boatyard and take in our garbage.  We took the dinghy through the channel and tied up to a seawall that stretches about 20 blocks.  They have ladders to climb up the wall.  Of course there are businesses with private docks interspersed along the wall.  The guide books said to just tie up anywhere you aren’t blocking a business, so we did.

We tied up near 11th street.  Several people recommended eating at Budda’s  on 12th.  We walked up 11th and saw several nice homes with nice landscaping.  There was a lot of building in progress.  We came to a major road that ran east west along the island.  Most of the traffic was golf carts.  There are no bridges to other islands, so I guess you only leave here by boat or ferry.

We found Budda’s and it was unique.  There was a little parking lot full of golf carts.  Then there was a full size school bus with a take away window.  There were people sitting on benches waiting for their orders.  We could see if you continued past the bus, there was seating and a bar.  So we asked, and we didn’t have to order at the window, we could sit and be waited on.  They had an interesting menu of burgers.  Several of them were referred to as “slugers” because they had coleslaw on them.  We both went for the Pine burger.  It had cheese and bacon with fried onion and fried pineapple.  They grow pineapple on this island, so we thought we should take advantage of the fresh pineapple.  It seems like we both crave a good hamburger after eating fish for several days on the boat.  And yes, it was messy and yummy.

After eating, we stopped in the small liquor store on the same property.  We met Budda and he was a wealth of information for us on the island.  He also told us about how they just this year changed the law to allow liquor to be sold on the island.  So he asked us to put the word out to other people, especially on Active Captain.  It’s amazing how the locals know about Active Captain.  It’s becoming the Trip Advisor of the water world.

We walked to the grocery store when we left Budda’s.  We stopped at a dive shop along the way to price a few things.  They also sold a couple items made by the wife of an employee.  They had English Toffee and other flavors of pulled hard taffy.  We had to buy the toffee.  We also bought canned cocoplums.  They are grown locally.  They looked like large cherries.  Unique-so we had to try.

The grocery store was really nice.  We picked up our fresh veggies, bananas, eggs, and chips.  We packed them up in our back packs and headed back via the canal shore line.  We were looking for the hardware store and the boatyard.  We came to our dinghy before either of them.  So I waited with our groceries while Dave looked further.  He found Spanish Wells Marine and Hardware and bought a new Hawaiian sling handle for spearfishing.  It was cheaper than at the dive store, which they said would be more at the water front.

We decided to take the dinghy to R&B boatyard and to Pinder’s market that was next to it.  We realized that we had forgotten limes (and Dave mentioned chocolate).  In the store, I found limes and some good looking oranges.  I didn’t ask, but checked my receipt later.  The oranges were $1.25 apiece and the limes were $.60 apiece.  And I found a couple candy bars.  A typical size snickers was $1.60.  This was a smaller store and everything was higher.  In the Bahamas, you pay about $3.50 for a 10oz bag of off brand chips.  But Doritos or other name brands are $6-7 per bag.  We enjoy a few chips with lunch, one of our vices.

I met Dave at R&B Boatyard.   We met Robert, the owner.  They had a fan for our generator, but it didn’t have enough cfm’s, cubic feet per minute, to cool it efficiently.   We checked out their bottom paint.  The one we wanted was $444/gallon.  And we would need 4 gallons.  we went back to boat to think about it.  Dave called the boatyard in Marsh Harbor to check on their paint.  It was $570/gal.   So Dave went back to R&B for paint.  Robert told Dave to bring in our Cruiser’s Permit.   With that, he wouldn’t have to charge the 7.5% VAT tax.  That saved us about $125.  So I guess we’ll be painting the bottom ourselves this summer.  This is made in Florida, but you can’t buy it in the US.  It stops the growth on the bottom of the boat for about 2 years.  So we won’t have to clean the bottom like we do now every few months.  Boats generally have their bottoms repainted every 2 years.

With most of our town duties taken care of, we moved the boat to Meeks Patch, an island about 2 miles from Spanish Wells. This location will have better protection from squalls over the next few days. 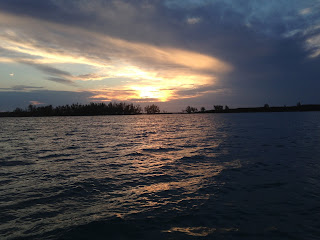