May 25
We spent the day on the boat doing “boat stuff”.  It was nice to have fresh vegetables to make conch salad.  Dave cleaned the hull of the boat again with the hookah system.

May 26We wanted to go into Spanish Wells today to get propane and a few more groceries.  We made tentative plans to meet Phil and Teresa at the Anchor for lunch at 12:30.  We had to do some research on finding propane.  Last week, we called Pinder’s Tune up.  They were listed in the guide books as having propane, and they said they didn’t have it and to call Carl Aubrey.  Dave had asked Budda, at Budda’s restaurant where he gets his propane.  He told him Pinder’s.  So we called them again today.  When they told Dave that they didn’t have propane, Dave said “boy, everyone says you’re the place to get it.”  Then we got the whole story.  They DID have propane up until about 3 weeks ago.  Their neighbor was complaining about the smell.  Then they said it was killing their grass.  So they thought they better stop before they were sued.  They gave us Carl’s number again.  Dave called Carl again to see if they could set up a time to get propane.  Carl works at an electronics store .  But he has the propane tank at his home and fills tanks on the side.  He said he could meet Dave over his lunch hour from 12-1:00.  It was close to noon by now.  So we grabbed everything we needed and headed to town.

We tied the dinghy to the seawall close to Carl’s home on 17th Street near the canal.  We weren’t sure this was a public place, so I stayed with the dinghy.  In the meantime, I tried to let Phil and Teresa know that we would be late.  We didn’t have phone numbers, but they said to e-mail them if there was a change.  They could get free wifi at the Anchor restaurant.  I tried sending them an e-mail about 3 times, but the signal was really weak and it didn’t look like it went through.  Oh well, sailors understand that things come up and it’s hard to communicate.

Dave returned within 30 minutes and we took off by dinghy to about 4th street near Pinder’s grocery.  It seems like every island has it’s family name, and this one is Pinder’s.  We were only about 15 minutes late.   Phil and Teresa were there and sitting with another couple and a teenaged boy.  I walked up and said “boy we’re 15 minutes late, and you already have new friends!”  They laughed and introduced us to the other couple, Sue and Rich and their grandson, Quentin from the sailboat Other Goose.  We had heard of them in Georgetown.  Sue was one of the cruiser’s net anchors.  So it was fun to meet them in person.  They were from Canada.  We had all kinds of places in common that we had been.  Phil and Teresa were amazed.  We had a great time having lunch together.  Then I stayed a little longer to use the wifi and check on getting another quote for our boat insurance. 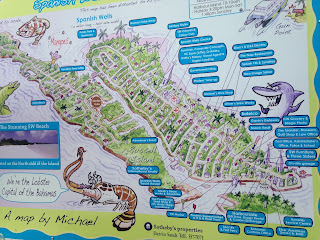 Dave ran another errand and came back.  The wifi was really slow.  So I decided to go to Budda’s and have a drink with Teresa and Phil and use their wifi.  Dave went back to the boat with the groceries and the propane and said he’d come in later to get me.  We walked together to Pinder’s grocery, picked up a few things, and Dave took off in the dinghy.  I had to walk to 12th street, so we paralleled each other, me on shore and Dave in the dinghy.  I guess he could have given me a ride to 12th, but the walk was nice.

Phil and Teresa had just arrived and ordered a drink when I got to Budda’s.  After ordering a drink, I saw Budda and told him about the propane.  He hadn’t heard that Pinder’s stopped selling propane.  But he knew Carl Aubrey (of course-small town) and thanked me.

I was able to finish my insurance request for a quote.  Then I moved on to updating my blog.  The wifi was pretty good, but I wasn’t very efficient because of talking to Phil and Teresa (oh yes, and because of the drinks).  Dave ended up joining us and we decided to stay for dinner.  I don't think we haven’t eaten out twice in one day since we have been in the Bahamas.  It was dark by the time we returned to our boat.  We have started to turn on our anchor light when we leave in the afternoon.  It is an LED light, so it doesn’t take a lot of power.  And better safe than sorry.  I track everything we spend on a spread sheet.  We use a lot of cash, so it’s nice to see where it went.  We can go over a week not spending a dime at anchor.  Then when we hit a town, we spend so much restocking, refueling, buying parts, and the luxury of eating out.  We can burn through some bucks pretty fast. 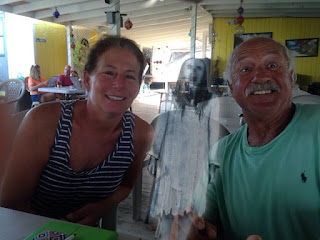