Today we sailed to Chub Cay about 25nm south and west.  The last couple islands in the southern part of the chain actually run east-west.  We had our fishing lines out behind the boat, but all we could catch were barracuda.  One swallowed the hook so deep, that Dave snapped off it’s teeth with a pliers to be able to get deeper and not snag a finger.   He called it “Barry dentistry”.

I kept one of the huge conch shells from the Exumas.  I’m not sure what we are going to do with it.  It is so heavy, that it just sits in place and doesn’t move when the boat heels.  I was looking at it today, thinking about how I have to clean the outside better.  I was telling Dave how I remember my parents had two small conch shells.  And I remembered holding them up to my ear to hear the “sound of the ocean”.  Dave shattered my great childhood memory by saying “well, now you know those were illegal!”  They are supposed to be larger with a fully formed “lip” to keep them.  In my parents defense I said “well, they probably got them in California.  Maybe the law is different there”.   We had a good laugh.  (Sorry to any of my siblings that may read this.)

Chub Cay had a marina that is a private resort.  So we just anchored in a bay at the west end that gave us some nice protection from the wind.  We were expecting squalls in the area throughout the week.  We arrived by 2:30, but decided it was too late in the day to start snorkeling.  We like to just relax after a passage, even though this was a short one.  AND sharks feed later in the day.

We had a great spaghetti dinner on the boat.  I had browned some Italian sausage a few days ago with onion and green pepper so none of those ingredients would spoil.  We have been eating so much fish, that we finally got around to using it.  I set aside some of the sauce and meat mixture for Dave to make another pizza in the near future.  But I put it in the freezer, just in case we eat fish for several days. 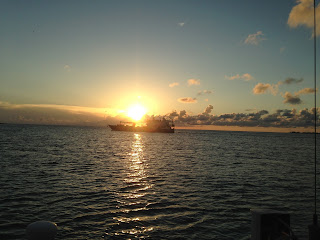 Posted by svluckofafool at 8:42 PM