We listened to the cruiser’s net this morning and realized it was going to be a little windy to do the snorkeling we were hoping to.  We could even see crashing waves across the piece of land separating us from the ocean.  So we decided to sail to Hopetown and be tourists today. We enjoyed breakfast in the cockpit outside.  Dave and I were telling Cheryl about our pet peeves with the butter knife.  Dave hates a heavy handled knife (which is what we have on the boat) because it won’t stand up in the butter dish and it slides off of the plate or into the middle of your plate with the motion on the boat.  No matter what, you end up with butter somewhere it shouldn’t be.  I then explained how I don’t like crumbs left in the butter.  So I told Cheryl that by the next time she visits us, we’ll be swiping our fingers in the butter, spreading it as needed and licking it off (along with the actions).  That sent her into a giggle fit that set the tone for the week.

We sailed to Elbow Cay and put Cheryl to work handling the jib sheets.  On the way to Hopetown, we realized that today is a National Holiday in the Bahamas, Easter Monday.  So instead of going into the town, we anchored near the south end of Elbow Cay.

Cheryl and I took the dinghy and our snorkel gear to Tahiti Beach.  This is the beach that had a sand bar extending out from it.  The area in front of the beach was pretty shallow, but we did our exploring.  Cheryl and I each found a piece of sea glass, which we have never found before.  And we saw sea biscuits, a fatter version of a sea dollar.  I did’t realize that’s what I had seen on another island.  These were hard, but puffed up about 4 inched thick.  They have the sand dollar design on the top and a hole in the middle of the bottom.  After about 30-40 minutes, we went back to the boat for our picnic lunch.  We took it to shore and sat in the shade.

Before we went snorkeling again, we moved the boat further off shore.  The tide was going out and we would have been “high and dry” if we hadn’t.  We then snorkeled on the boat side of the sand bar towards and island just off shore.  Well, by now the water was getting pretty shallow with the tide decreasing.  So that didn’t last long.  We did see a spotted southern eagle ray and a large star fish.  As we were walking in the water back to the boat, I spotted the unusual creature that I saw under our boat when we were first at Elbow Cay.  So Cheryl put her fin under it to see if it was attached and growing from the floor or free floating.  And it was free, so we were able to inspect it further.   The bottom was similar to a jelly fish, in that it has a pulsating motion, but was more in the shape of a bowl.  In the bowl were 8 symmetrical puffs of fuzzy leaves, and out of those a few blades reached up like blades of grass.  It was all in shades of brown and beige, but when you picked it up, the bottom had shades of blue in it.  Neither of us carry an underwater camera anymore.  So maybe we’ll find an internet picture of it.  Cheryl has dived all over the world and has never seen anything like this.  So that topped off our day.  And yes, we found our creature online.  It was a Mangrove (upside down) jellyfish. 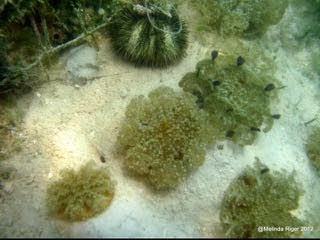 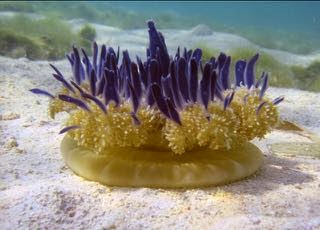 We decided to move the boat back near the light house so we could watch the lighting after sunset.  We anchored even closer than before.  After dinner on the boat, we watched the lighting with binoculars.  Cheryl enjoyed seeing it, too.  We topped off the evening by playing a few games of cribbage.
Posted by svluckofafool at 8:14 AM