We decided to head south and clean the bilge when we can leave it open to dry.  But before we left, we ran the generator to check how it was running today.  Dave noticed that there was still water dripping inside the generator.  So that is going to take further checking to stop the leak.  He checked the filter, too.  It seemed damp, but no water running in.  So it may still be damp from last night.  So everything will be double checked after we get to Georgetown.

We left about noon after checking the generator.   We were only going part way to Georgetown today.   We went out west, on the Exuma Banks side of the islands.  Then we set course for Little Farmer’s Cay.  We had a nice sail, most of the day.  I even took a nap in the cockpit.  Last night was kind of rough with a west wind in our anchorage.

After we anchored at Little Farmers Cay, in a nice little cove, I went for a swim to cool off.  There wasn’t much of a breeze today and it was about 90 degrees.  I snorkeled and checked our anchor.  Then I swam to the shore line where there some small reef growth.  I was enjoying the variety of small reef fish when I saw my first lion fish in the Bahamas.  They are nasty fish with venomous spines that are eating the other reef fish.  They actually taste good if you can catch and clean them without getting stuck by the spines.  I first saw them in the Cayman Islands.  The dive masters were catching them in special bags to remove them from the reef.   And they gave us the fillets of one to try.  It is a nice white flaky fish.

They think they were likely released from aquariums because they were eating all the other fish.  They were first reported in the Bahamas in 2004 (Florida in 1985).  The female spawns year round every 4 days with 25,000 eggs per batch.  They eat over 40 species and can reduce native fish by over 95% at some sites.  The natural predators don’t recognize the lion fish as prey.  So They are really becoming a problem.

After I got back in the boat, Dave decided to try his hand at fishing.  He saw a large fish while he was anchoring that he thought was a barracuda.  Sure enough, he saw him again and played with him until hit hit on his lure.  It was about 4 feet long and Dave had quite the run with him about the bay.  The neighboring boat even commented on his nice catch.  Well it wasn’t in the boat yet.  Just after that, it leaped in the air about 5 feet up and about 10 feet across the water before diving back in.  And I missed it with the camera.  He fought about 15-20  minutes, trying to keep it out of the anchor chain or from going under the boat around the keel.  It tried to run out all of his line.  Then it broke loose.  Dave was going to release it if he had caught it.  So he really enjoyed the fight.  Losing his lure was worth the $5 ride.

Back in the boat, it was too hot to eat.  So we had cereal, showered and went to bed.  This was the first night I felt sweat running down my face while I was in bed.  Dave said the sweat on his back made it itch.  And he thought his pillow was getting soggy.  BUT, we are in paradise, so we have to make some sacrifices. 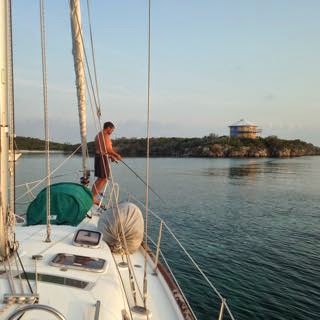 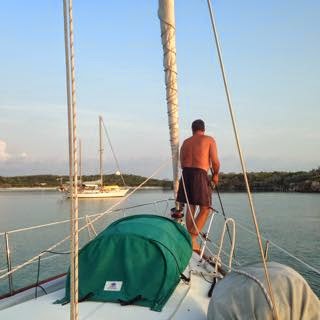 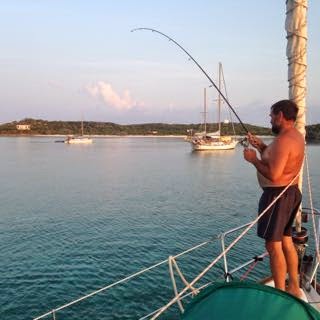 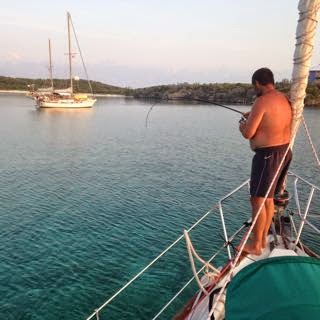 Posted by svluckofafool at 10:06 AM