Today we decided to explore Normans Cay by dinghy.  It is shaped like an upside down V with a lagoon in the middle.  Of course you can’t directly enter the lagoon from the south.  We had to navigate our way through small islands and rocks and approach the lagoon from the opposite side of the island.  The west side of the Exumas, where we were anchored, is called the Exuma Banks.  There is a lot of shallow water for about 20 miles before you get to deep water.  The east side of the island is the Exuma Sound.  It is rocky and shallow near the islands, but then it goes to 1000-3000 ft deep.  As you head east, you would come to the Eleuthera Islands before heading out into the Atlantic Ocean.

After we rounded the southern tip of Normans Cay, we headed east through the channel that we were at yesterday with the lone palm island, now named Erin Cay.  As we moved further east, we passed the remains of an airplane in the bay.  The top half of the fuselage was above water.  As we moved closer, we could see the wings underwater.  Then we motored further east close to the inlet to the Sound.  But we were able to head north inside some small islands/rocks.  We started to pass a beautiful beach that had crashing waves on the far side.  We decided to stop for a while and let the tide rise before we entered the lagoon.  It looked really shallow in front of the beach, so Joe got into the water to check and it was above his waist.  So we continued to motor and he wanted to walk through the water.  We had seen a ray earlier and could see another one.  So we took the dinghy around it and tried to herd it towards Joe.  When he saw it coming his way, he did a funny scurry through the water, then it took off in another direction.  It was probably 5 feet in diameter.  We had a great laugh at his expense.


Once we landed the dinghy, we tried to walk to the top of the island, but it was real jagged rock similar to lava.  But we were able to get a few pictures of the Exuma Sound.  Back on the inside of the island, we found a break in the rocks with crashing waves that looked like a good photo opportunity with a passing sailboat. 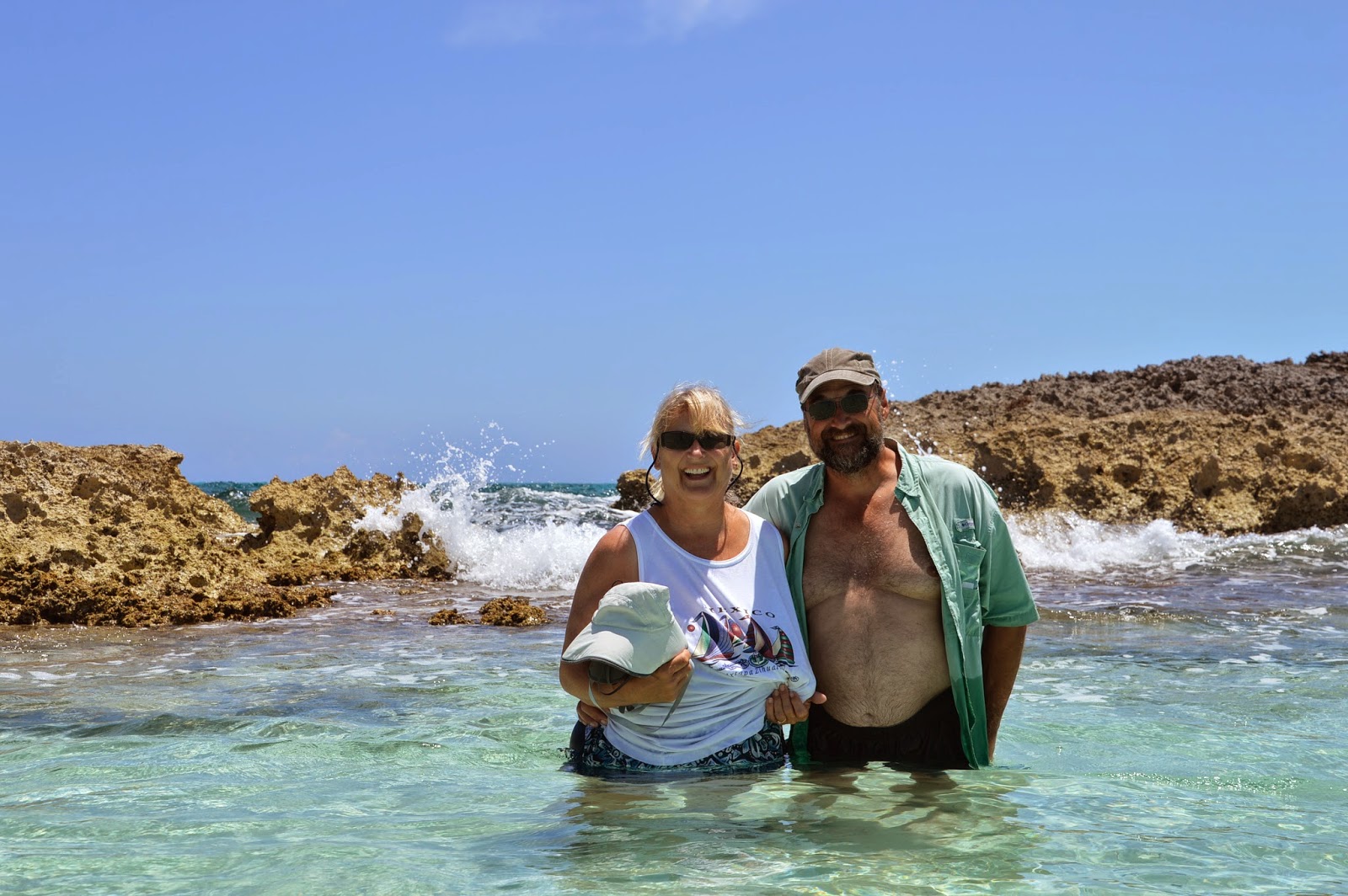 Back at the beach, I decided to snorkel and look for conch.  No luck.  Erin found a hermit crab  walking around with a shell on it’s back.  In the meantime, Dave and Joe decided to dig into a hole that was in the sand just to see what kind of creature was inside.  They followed the hole down about 2 feet and then it turned to the side.  At first they were poking their fingers into the hole.  Then Dave decided to get a stick.  As they were poking further into the hole, a crab grabbed the stick and they pulled him out.  He was not a happy camper.  His body was about 6 inches wide and an edible size, but they let him go.  We enjoyed a snack lunch before leaving.  We decided to call this beach Mary Cay since I suggested we stop.  They pronounce cay as key.  But my middle name is Kay, so we called it Mary Kay.

We moved further north and found the small entrance into the lagoon.  We had to pass between two rocks.  On the rocks, someone had stacked rocks and a metal tube to make it look like cannons on each side of the entrance.  Another rock had another cairn marking the entrance.  There was a channel that headed back west for a ways.  Then we rounded a corner and it opened up into a beautiful blue pond.  We explored 2 caves in the east side.  Actually Erin did and took pictures while we waited in the dinghy.  She is a rock climber and had no trouble maneuvering about the rocks with an expensive camera in her hands.

As we moved through the lagoon, we saw several eagle rays, a shark, and 2 different turtles, a big sea turtle and a smaller loggerhead turtle.   Towards the north east end, there was a little grove of mangroves.  We had Joe stand at the bow and use one oar like a canoe paddle and we went inside an area about 50 feet in diameter, then back out.  We saw mangrove jellyfish in that area.  We also saw a native bird called a tropicbird.  They were white with long tails and were circling the sky above us.  March and April are their mating season.

There were a few homes around the lagoon.  Most of them were tucked back into the woods.  But one mansion stood out that was under construction.  We didn’t see any activity, so not sure how long it’s been sitting there like that.

At the north end, I snorkeled for conch because we had heard others had found them here.  Joe and Erin walked around near the dinghy with our plexiglass bottom bucket also looking for conch.   Dave did a little fishing and we let a line drag behind us on the way out, but no luck.

We retraced our way back to the boat, avoiding rocks along the way.  When we passed the airplane wreck, the tide was higher and you couldn’t see it at all.  So it was good to have my cell phone along with a Garmin navigation app to help us through these waters.

Since we didn’t catch any fish or find any conch, Joe made us a Thai peanut sauce from scratch with what we had on the boat.  We mixed in canned beef and served it with our angel hair pasta.  Amazing!! and So delicious.  Now we have to have him write down what he used.

Posted by svluckofafool at 6:20 AM