February 26-another ladies luncheon.  We try to do this once a month at the marina. 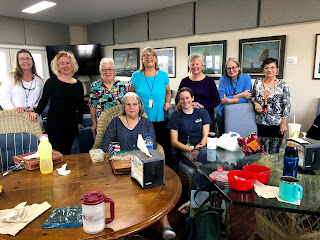 February 26-Close to the full moon, several boaters like to test their outboard motors with a “dinghy drift”. We head out away from the marina and raft up our dinghies.  We used to share drinks and snacks.  Now people just bring their own refreshments.  We had about 8 dinghies and 20 people.  Fun night. 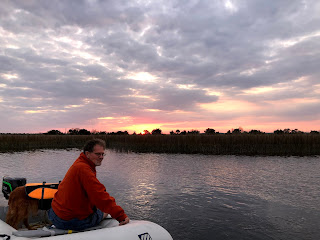 March 5-one of our boating friends received permission from the marina for his friend to land a helicopter at the marina.  He was transporting it along the coast and planned an overnight in Brunswick.  It was fun to watch it land.   Dave and I each made a video.


March 8- 3 boats decided to make the dinghy trip to Marshside grill for lunch again.  This time, when we called the restaurant to have them open the gate at the dock, they didn’t have the key to let us in.  The dock actually belonged to a fishing company next door.  They were doing some repairs to the dock and hadn’t given them a new key.  We were all pretty hungry, so we found a spot nearby that we could tie up and get to shore near their parking lot.  What troupers! 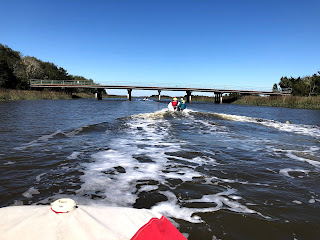 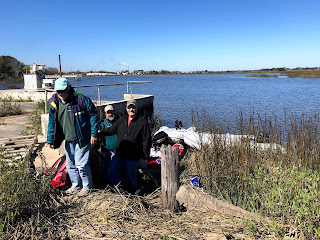 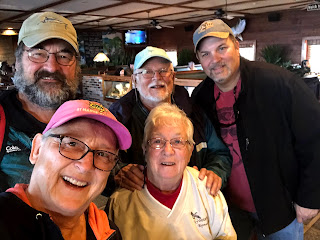 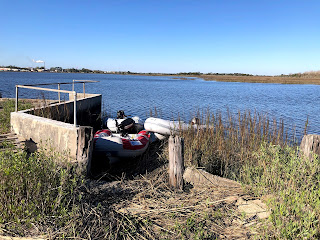 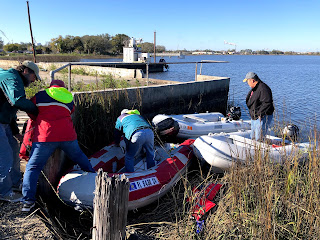 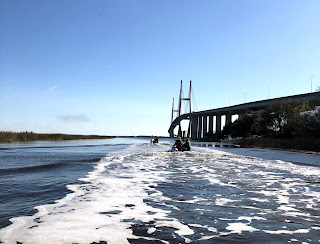 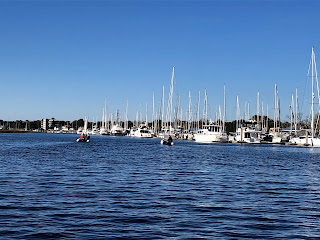 March 10-Dave continues to work on our bimini and dodger.  It was Christened today with a couple good bird droppings. 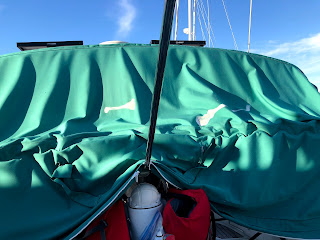 Dave scavenged a piece of bow from another boat to add a hand rail for us in the cockpit.  Very handy.  He also used pieces to add support to our dodger. 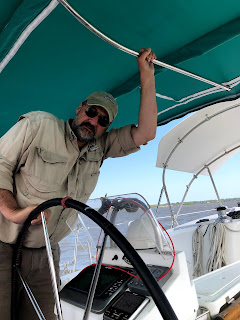 March 13-This is the Saturday before St Patrick’s Day.  Pete was hired to play Irish music in a couple of the squares in downtown Brunswick.  It was a beautiful day. 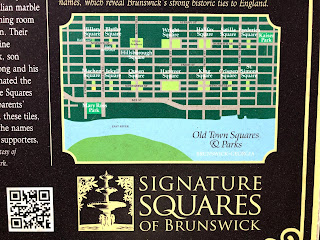 During the week or St Patrick’s, Pete’s previous band members in South Dakota decided to come here and play a couple places with him.  There was a blizzard in SD, WY, and CO, so a couple of them were delayed.  They played together Tuesday night at Tipsy McSway’s downtown.   We had a large table of boaters there to support them.  It was fun to hear them together again.  I was videoing for Facebook Live.  The photos were taken by Lorie from our dock, or I should say "of Lorie" with her camera.

On St Patrick’s day, The River Liffey Boys played on St Simon’s Island at Gnat’s Landing in the afternoon and at Murphy’s Pub in the evening.  We listened to them in the afternoon, but returned to our marina for our own St Paddy’s party.

March 19-Dave has been working on some electrical issues near our mast.  He replaced 4 wire clamshells that  protect wiring that runs through the deck without leaking.   He had been using butyl rubber to seal things and it was looking “suspect”.   Wires to our VHF radio, nav lights, anchor light, deck light, motor lights all to be cut.  He had 4 clams with one wire each.  Now there are 2 wider narrow clams that can run 4 wires through each one, doubling our capacity. 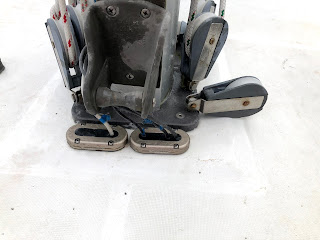 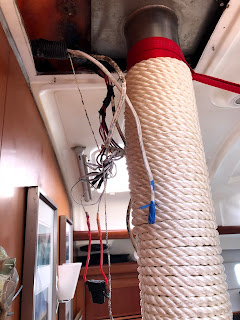 Posted by svluckofafool at 11:19 AM