Friday
Our friend Sylvia, from St Paul, MN, took us to the Enterprise dealer so we could be there earlier than they would have been able to pick us up.  We were on the road to NC by 8:45am.

With a couple stops along the way, we made it to their boat by 5:30pm.  Their boats were at a  Marina on the Alligator River off of the Albemarle Sound.  It was dark by the time we got there and only had an address, no landmarks to look for.  We missed the marina and were on a 3 mile bridge before we realized it.  Of course, there was no turning around until we were were on land again.  Would be nice to return in the daylight.

Patti had a nice chicken dinner waiting for us.  After dinner, we got settled in on their catamaran for the night.

Saturday
Patti and I left at 6:20am for Cambridge, MD to pick up their car.  It was at a nautical electrical business they used while they were in MD.  We thought if we were there by noon, we may be able to return the rental car and save a day on the rental charge.

We arrived by 11:30, and thought we would make the deadline.  I was going to drop off Patti, then she could meet me at the Enterprise office.  Their car had been there about 2 months, so it was parked off to the side in their parking lot.  It was blocked by some of their service vehicles and they weren’t open on Saturday.  Well, I wasn’t going to leave her until we knew she would be able to get the car.

I thought I’d call the Enterprise office to see if we could drop it off after they closed at noon.  WELL, they weren’t open at all on Saturday.  I don’t know how I mixed that one up.  So I figured it wouldn’t matter what time I drop it off now.  After making a few phone calls, we were able to get someone to come and move vehicles so their car was able to move.

After all this, we dropped off the car by 2:00.  We called the national Enterprise to see if they would only charge us through today.  They said it was up to the local office, but she would let them know the time we dropped it off.  So we’ll see what happens when we get our bill.

We went to a Mexican restaurant for lunch.  Too bad we still had to drive somewhere.  We were ready for a couple margaritas.  We had to have crab burritos since we were in Maryland.  We packed bags to spend the night in a hotel because the guys were moving the boats.  We called them to see what the plan was.  The weather didn’t look cooperative for them to leave in the morning.  So we decided to head back to NC. 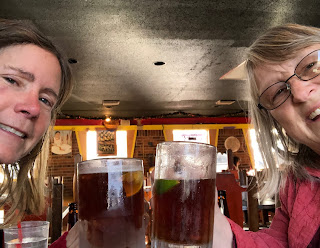 Patti wanted to stop at Trader Joe’s on the way back.  We found one in Virginia Beach, not for out of our way.  But that put us back at the boats by midnight.  After unloading, we were in bed by 12:45.  In hind site, we should have gotten a room, had our margaritas, and gone to Trader Joe’s in the morning before heading back.

Sunday
We ended up with a string of crappy days for moving the boats.  We spent the day on their trawler helping them with projects and organizing things.  It was a windy rainy day.  By the time we were heading to bed, the winds had picked up to gale force winds, even gusts to 50mph.  Dave, Patti and I worked at adding additional fenders and lines to secure both boats.  As we headed to the catamaran to go to bed, I asked Dave “what would they have done if we hadn’t been here to help with that?”  His response was “they probably would have had some damage to their boats.”

Monday
Patti and I were headed into town, about 10 miles away, for parts.  There were about 4 other boats in the marina that came in to wait out the weather.  We knocked on hulls to see if any of them wanted to go in for groceries or anything.  One boater joined us.  He was a marine mechanic and ended up giving Fred and Patti his name and number in case they needed help with something.  After our parts and grocery store run, the 4 of us ended up back in town for dinner at a little local diner.

Tuesday
Originally, I was going to leave on Sunday and pick Dave up somewhere in SC on Thursday.  Since they didn’t have the weather to go anywhere, I stayed and just brought Dave back with me.  I have lab work in the morning, so we needed to leave on Tuesday.  We were up early to help Patti and Fred take off by 7:30am. 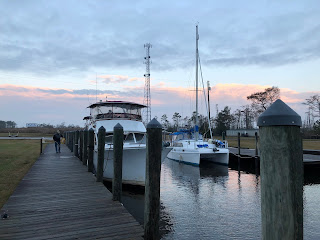 On the way back, we received a text from Fred saying that Patti had hit something and was taking on water on the catamaran.  And Fred had grounded the trawler in a shallow area.  We received one other text saying everything was fine.

We finally connected with then after they were settled at the a marina at 8:00pm.   Patti thought she his a log in the water, she never saw what it was.  One of the two engines stopped.  She went below and found water in the bilge.  She called Boat US to tow her, but they patched her into the Coast Guard.  They came to her boat, checked over everything.  The bilge pump had removed the water.  So Boat US towed her to the nearest marina.  In the meantime, Boat US had towed Fred off of the shoaled area.  He then followed them into the marina in Belhaven, NC.  They took the catamaran out of the water to be evaluated the next day.  Wow!  Glad they were both ok.
Posted by svluckofafool at 7:49 PM