While we were getting ready to leave in the morning, Dave noticed that one other boat had anchored near us.  He had a chat with him on the VHF radio and found out that he had tried to enter a cut just south of our anchorage and it was too shallow.  So he came back here and anchored waiting for a higher tide to go through.  He has a 6 foot draft, and we have a 5 foot draft.

The other boat at our anchorage had been in radio contact with him.  They had the coordinates from the Coast Guard to go through where a new channel had been dredged but not updated on charts.  They went through this spring with no problem, but they had a 4.5 ft draft.  So we all followed each other through out the day.  The lead boat would radio back to us what depths they were finding in the shallower areas.

We came to a cut that had a dredger working on the channel.  He gave us instructions on which side to pass and to stay close to him.  Then he resumed his work after we passed.  There has been a dredging on the ICW this year.  The federal money had been cut with our last administration, which made it pretty hairy for most boaters.  So it was nice to see the waterway being kept safe again.  There is a lot of shipping traffic on barges, not only pleasure boats. 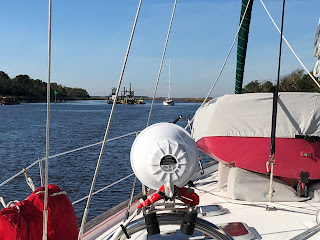 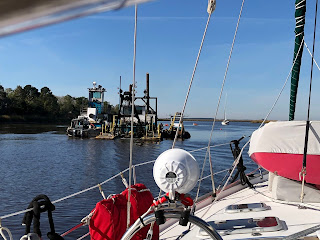 We decided to get a slip in Beaufort, SC for the weekend.  The weather is supposed to be bad-wind and thunderstorms.  Plus it would be fun to watch an Alabama football game in a bar.  There is a swing bridge right before you get to the downtown marina.  It opens on the half hour.  We figured the timing would be perfect to go through at 2:00.  About 30-45 minutes out, we saw a barge ahead of us.  The bridge will open for them whenever they come through.  We tried like mad to catch up with them, but we were fighting a current.  The barge and the other sailboats made it though, but the bridge tender said they couldn’t hold it for us.  That was about 1:50, so they didn’t open it at 2:00.  We had to wait for the 2:30 opening!!  At least we had lots of water to circle around for 30 minutes and plenty of daylight.

The current is really strong at this marina since they are on a bend in the river.  Just as I was ready to call the marina on the radio, Dave said he didn’t want to get a slip if it was tough to get into it.  He would rather have a mooring ball.  So I handed the microphone over to him to decided what to do.  We had already asked for a slip.  Now we were just asking for instructions.  Luckily, they offered to let us tie up on their outside dock.  It’s easy to pull up along side of it.  Trying to turn the boat and get into a slip can be hard with wind and current.  I told the dock hand he made a good call giving us the outside dock.  He understood our concerns. 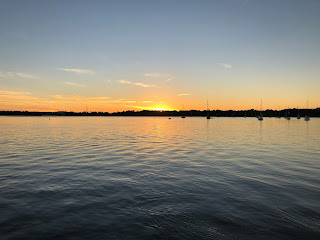 After getting the power hooked up and the heat turned on, we decided to head into town for happy hour/dinner.  We also had to celebrate the end of hurricane season.

Posted by svluckofafool at 6:25 PM