Saturday
We met the people on 2 other boats that are leaving here today and heading to Florida/Bahamas.  Betsy and Randy had a newer 423 Beneteau (or at least it looked newer, maybe just cleaner).  Sounds like they have been sailing awhile, but this is their first time living aboard and heading to the Bahamas.  They are making a short trip today in the Chesapeake.  Dan and Eric are on the other boat.  It sounds like Dan owns the boat, but Eric is helping him move the boat to Florida.  They are heading to Norfolk and then the ICW.  We plan to do day trips down the Chesapeake and then decided if we are going down the ICW or on the outside through North Carolina.

Before leaving, we had to do our usual boat prep chores.  Dave vacuumed water from our leak.  We had a couple rough days at the marina, which allowed water to come in.  Dave also filled our aft tank with water from the dock.  He shut down the power and put away the power cords.  No more heat :( hopefully we won’t need it anymore.  Dave brought the dock lines back to the boat so we can leave without dock hands to throw us the lines.

I returned our bathhouse keys to the office (otherwise there is a $20 charge for each).  Then I tucked things up inside the boat.  Can’t leave things on counters or shelves that will go flying once you heel.

We left the dock at 8:00am, then I made breakfast while we were under way.  Our plan was to stop at the Solomon Islands about 50 miles south.  We arrived about 1:30, so we decided to continue on.  After checking several weather sources, we decided to continue offshore around the Outer Banks of North Carolina and maybe on to Charleston.  The weather will turn bad by Wednesday night with no prediction of when another good weather window will show up.

We were able to listen to the Alabama football game.  Yes, they won.  ROLL TIDE!
Here is a sample of the boat traffic.


We hadn’t planned to travel overnight.  I was able to make the table into a bed and move the bedding from the v berth to the salon by myself.  Not sure that was a good thing, I may have to do that by myself more often now.  The v berth can be too rough to sleep in while under way.

By 5:00 we were 1/2 down the Chesapeake from Annapolis to the bridge at the entrance of the bay.  That was 70nm in 9 hours.  We were making good time.  We had an early dinner so we had sunlight in the cockpit while eating.
At 6:00pm Dave vacuumed water from under the engine.  Then he started his watch.  I cleaned up the galley and hit the bed early.

Sunday
I woke up about 1:00 and Dave was passing the bridge across the bay and heading out onto the ocean.  There is one long bridge across the bay that has 2 sections that go under water in the shipping channels.  It’s great to not have to worry about a bridge opening for us.  But is also an area where traffic bottle necks.  Dave just had one other cargo ship to avoid.  I was up and back at the helm by 1:30am.

Whenever we change hands at the helm, we orient each other to where we are and where we are heading.  Plus we review what ships are in our area, especially if they are in our path.  As we were doing this, the loud bilge alarm went off warning us of water in the bilge.  This is a sensor that goes off even if it is splashed with water.  So we weren’t too alarmed, just good timing to take care of it again.  Dave vacuumed more water before he went to sleep.  That made it about 2:00am by the time I actually started my watch.  We had sails set, but we were also motoring.  The direction we are moving isn’t conducive to only using sails.  But we can move faster having the sails assist.

Dave usually sits at the helm most of the day, but I convinced him to take a nap today.  About 2:00 he vacuumed water again and took his nap.

About 5:00 Dave started his watch again.  While the boat was on auto pilot, he filled the fuel tank with about 35 gallons of diesel from the fuel bladder that is on the deck in front of the dodger, under the boom of the main sail.  He thinks that is so much easier than refueling with the jerry cans.  He connects a hose between the bladder and the tank and gravity takes over.  Once the bladder is low, he picks up a corner of the bladder to assist.  He can do that that from the cockpit.  When he empties fuel cans, he has to go out on the deck of the boat to get them.  Then he has to balance the 5 gallon can to pour them into the tank while the boat is rocking with wave motion.  We only have the bladder out for longer passages.  It can be emptied and stored when not needed.  Pretty handy.  When we are motoring at. 20,000rpms we use about 1 gallon an hour.

Since we hadn’t planned to make an overnight passage, I hadn’t cooked meals ahead of time.  So today I made my first meal while under way, vs just heating something.  I made a baked pasta dish which will be easer to eat out of a bowl in the cockpit than spaghetti.  We have fiddles on the stove top to hold pans in place.  We put them to the test.  My only worry was the lid coming off of the boiling pasta and subsequently water splashing everywhere, especially on. me.  I learned that I would use a bigger pan so the water won’t have to be as high in the pan.  And we may get an apron like what I used to wear in chemistry labs.  We had a very yummy pasta dinner.

After cleaning up the galley, I was able to take a quick shower (didn’t wash my hair) with the boat rocking.  I think that was first, also.  Then I headed to bed.

Monday
I was up by 2:00am for my watch.  Dave was able to set a timer for 20 minutes and nap while on watch.   We have set a course with the auto pilot making sure to avoid any obstructions.  We have AIS to tell us what boats are in the area.  At the speed we travel, about 6-7nm/hr, we won’t hit anything within 20 minutes.  Then you get up, check the chart and do it again, if needed.    I did that for a 10 minute interval the night before, but I kept peeking and didn’t really nap.  But it’s nice to set an alarm in case you really did fall asleep.

We discussed stopping at Cape Lookout, NC for 24 hours.  That will give us chance to get a full night’s sleep.  And we will still have enough of a weather window to get to Charleston before Wednesday night.  We had 2 boats following us.  They were larger and faster, so I expected them to pass us on my watch.
Dave vacuumed AGAIN and went to sleep.  I actually felt overdressed for the first time in weeks.  Within about 30 minutes of the beginning of my watch, it started to raid lightly.  I was able to put up our stern isinglass curtain by myself (another chore Dave will think he doesn’t have to help me with).  The trick is standing on the cockpit bench to reach the zipper on the Bimini while the boat is rocking.  Dave was impressed that I handled it.

At about 6:00 am we rounded the Cape Lookout shoals that come off the southern tip of the land.  We headed north from there and into the Cape Lookout Bight to anchor.  Dave got up about the last half hour to be ready to anchor.  We saw dolphins and pelicans.  And the water was a nice blue green.  AND my toes didn’t get cold last night.  We are feeling like we are finally in the south. 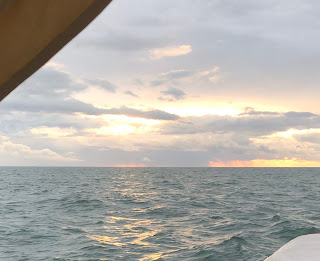 We both napped and took the day to relax and rest up.  We did some planning for our next route.  Dave thought it was 207 nm to Charleston and I thought it was about 240nm.  I couldn’t figure out why I was so off from his estimate.  We have been laughing over the last couple weeks about how I have been overestimating our routes.  Dave simply asked “is your measurement in miles or nautical miles?”  THAT WAS IT!!  We had an exorcism with my phone a couple weeks ago and it probably reset at that time to miles.  Mystery solved.


Posted by svluckofafool at 5:52 PM