Saturday
We had a lazy morning on the boat.  We enjoyed listening to the Oklahoma Sooners win their college football championship game.  Dave and our niece, Melanie Krause, text back and forth during their games.  She went to college there.

I had thawed tuna steaks for dinner last night.  But we went out for dinner.  So we had them for lunch.  Dave has turned me on to seared tuna.  He made a great sauce for them.  I cooked vegetables and rice.  We make a good team. 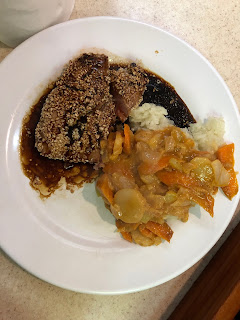 We walked to a local sports bar to watch the Alabama-Georgia championship game.  The crowd was split between the 2 teams.  Georgia was ahead until the 4th quarter where we tied and then won the game.  It was the most exciting game of the year.  But I have to admit, I think I enjoy listening to the game more than watching it in a bar.  It was hard to hear what was happening most of the time.

We met another young sailor at the bar.  Kyle seemed to be in his early 30’s.  He was single handling his boat, but his girlfriend was joining him soon.  He bought a 1959 37 foot Pearson.  He had lots of sailing experience, but was fairly new to having his own boat.  I guess he could get into boating cheaper by buying an older boat, so good for him.

Sunday
It was raining with lightening and thunder today.  So we decided to spend another day in the marina.  We did some work putting the boat back together.  We still had the bed in the salon area for our overnight passages.  And Dave had moved several things out of the aft cabin and put them in the v berth to make room for the boat mechanic to see our area where water was coming in.  After putting everything back in place, we had a dining room table again!!

I made a great spaghetti dinner from scratch.  While I was cleaning last week, I got into the bilge in our v berth where I had some canned food stored in ziplock bags.  Moisture on the walls of the hull had run into the bilge.  Some of the bags weren’t sealed, so the cans were rusting.  I was glad I got to them before they were a bigger mess.  It was a luxury to be able to sit at the table with our salad, spaghetti, garlic toast made with Dave’s homemade Artisan bread and a glass of wine.  Things most people take for granted.

Monday
The weather was ok for taking the ICW today, but not for going off shore.  We decided to stay one more day and go on the outside to Brunswick, GA on Tuesday.  It’s about 100 miles off shore, which will take us about 16 hours.  If we take the ICW, it will take us 3 days to snake through the Savannah’s.  It’s a beautiful trip, but we are ready to be at our destination.  Plus we don’t have to time bridge openings or look for shoaling.

We went out for Dave’s favorite meal, breakfast.  I spent most of the day on the computer and Dave on projects.

Electrical problems
At a marina, we hook up 2 power cords.  One is for heat/AC.  The other is for the house panel with the battery charger, electrical outlets, water heater and the water maker.  After hooking up to the power pedestal on the dock, our house panel wouldn’t stay on.  Dave would check the cords, switch them with each other and back and they would work again.  This kept happening, so we gave up earlier.  Today he talked to the service rep for the company that made the isolation transformer that he added in August.  They thought since they were new, there may be a connection that came loose in the rough seas.

But first of all, the guy was a real jerk to Dave.  First Dave called the dealer for Victron in SC.  He said he just sells them, not fix them. So then Dave looked for a dealer with a service rep and found one in Florida.  When Dave told the rep he was having some trouble with his new transformer and had a few questions, he responded with “why did you call me?”.  Dave said “well….., it says you are a service rep, so I thought you might be able to help me.”  Again he said “Why are you calling me if you are in SC?”  He had to explain that they only sell them, not service in SC.  Then he asked why Dave didn’t call the people he bought them from.  Dave had to explain that they only sell them, not service.  Then Dave explained that he was the closest service rep in a state we were headed towards.  It would have been real easy for Dave to become a jerk or hang up, but he really wanted to talk to the guy.  He finally came around and answered Dave’s questions.

After further evaluation, Dave thinks the problem is in the power cords.  If the current is weak when it comes into the isolation transformer, it may be shutting it down.  So Dave researched online for the cost of new cords and found cords more expensive than what we paid 5 years ago, but much cheaper than West Marine.  They are a different company from what we have, Smart Plug, and come with a new outlet for the boat.  The cords will lock in nice and tight.  They will be waiting for us at the Brunswick Landing Marina when we arrive there in a couple days.

We both enjoyed long hot showers in the marina bath house.  Simple pleasures. 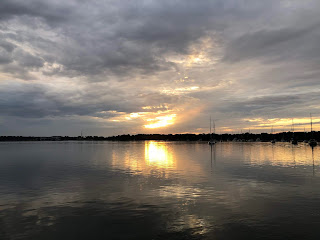 Posted by svluckofafool at 6:47 PM