We had to go about 12 miles up the Wando River to the Charleston City boatyard.  They scheduled us for 12:30, so we didn’t leave our anchorage until 9:15am.  We passed the area where some of the cargo ships are unloaded.  When our son trained in the Merchant Marines, he said it costs $10,000/hour to rent the cranes to load or unload a ship. 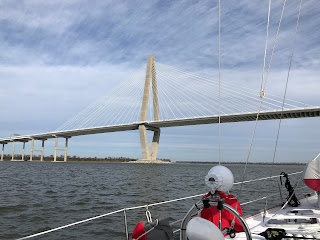 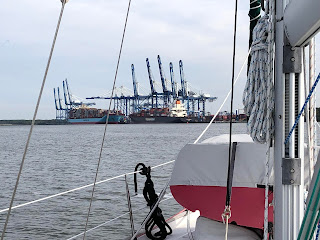 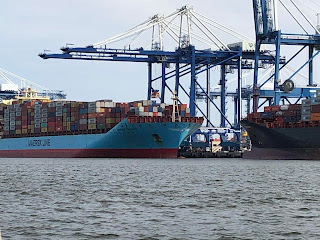 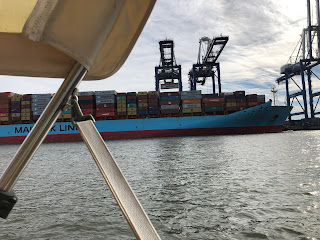 We arrived about noon.  We could see that they were taking out another boat, so we decided to just tie up on their outside dock and wait.  Since everyone was working on the other boat, we didn’t have any help docking.  I was at the helm and Dave was ready to jump off the boat and onto the dock to tie us up.  The current was so strong, that we circled around twice to get a better approach.  No big deal, it was good practice and we had plenty of room.
On the third attempt, Dave was able to get on the dock and tie our spring line to a cleat (from the center of the boat).  Then he was able to get the bow tied.  But the current kept pulling the stern away from the dock.  I was finally able to throw Dave our stern line, but he had to muscle the boat over to the dock.  It was quite a job, but we did it.  In hind site, we could have pulled up to the dock against the current.  Then we would have just turned the boat around when it was time to put it in the lift for the haul out. 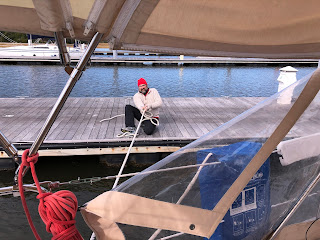 We met Eddie, the repairman that would be doing the work on our boat.  He used to work at the Beneteau factory.  Now he prepares new boats for launching.  And he does repairs like ours.

Since the boatyard was behind schedule on their haulouts, Eddie had time to come aboard our boat before the haul out.  We discussed our water leak with him.  He crawled around the boat and checked other typical areas for leaks on Beneteaus.  Everything else looked really good.  So he was pretty certain the leak was from the shaft tube extension.  He also answered any questions Dave had about our boat.  Great guy.

They finally hauled us out by 2:45pm.  Eddie said they always run late at this boatyard.  They moved our boat into the boatyard and put the boat on boat stands.  It’s always scary to watch them do this.  Eddie was able to peal the 5200 off with no trouble.  You could see a gap between the extension and the hull.  Eddie plans to fill it in with fiberglass, but it was too late to start today.  He’ll be back in the morning. 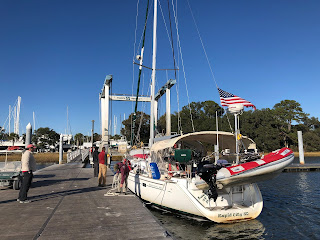 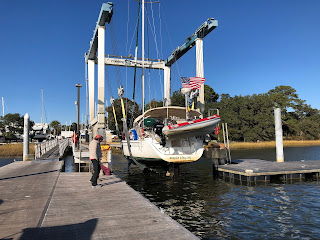 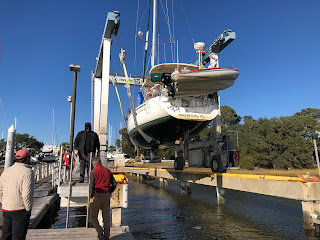 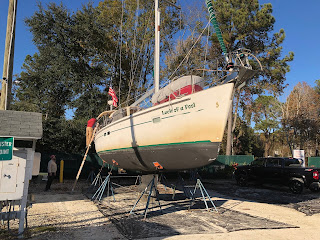 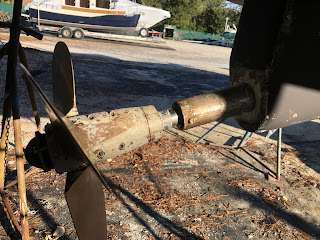 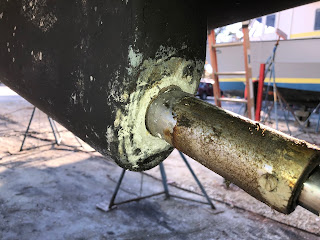 We used the boatyard’s courtesy car to go to a nearby restaurant they recommended, Swig and Swine.  We had an awesome BBQ dinner with leftovers.  Dave has a hard time passing up a dinner platter to be able to sample everything.

Back at the boat, it was pretty chilly.  I think the boat was warmer surrounded by water than air.  It was supposed to get down to 29 degrees, so Dave drained the hose on the outside stern shower.  I think that’s the first time we’ve worried about lines freezing.
Posted by svluckofafool at 4:21 PM