The boat was pretty cold this morning, so we decided to out for breakfast.  Plus, the kitchen sink drain would dump out on the ground right in the area they were going to be working today.  So, as a courtesy, we didn’t want to use the galley.  Good excuse anyway.

When we returned, Eddie was already at work.  He dug out any material that was around the shaft tube extension.  Next he put a thickened epoxy in the gap and wound fiberglass around the shaft extension.  He tried to help it set by propping a blow dryer in place to warm it up.  He was rigging a new sailboat in this boatyard, so he came back later and put another layer of thickened epoxy over the fiberglass.  He covered that in a clear wrap and said to leave it until tomorrow.  He said he could put a layer of paint over it in the morning, but it wasn’t necessary. 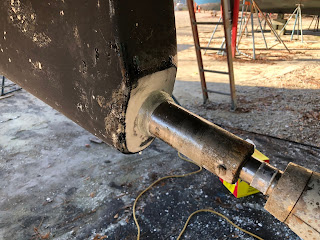 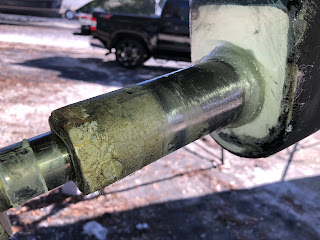 I spent part of the day at a laundromat, using the courtesy car.  I guess we were the only ones staying in the boatyard.  So we had the car to ourselves.  A lot of our throw rugs were damp from moisture within the boat.  So it was nice to be able to take them to a laundromat.  When it is warmer in the boat than outside, we get so much condensation on the inside of the boat.  We’ll have to do some major cleaning when we get settled in Brunswick with their free laundry.

Dave always likes to do some hull maintenance when the boat is out.  He would really like to do some touch up painting, but that would have taken more time.  And all of our tools for that are in storage in Brunswick.  He replaced the zincs. The one on the prop was mostly gone.  And the one on the shaft was completely gone.  It had actually come off since it was placed in September.  The worst place for electrolysis to take place is when we are at a marina and plugged into their shore power.  The only place we did that since September was in Annapolis for 3 nights.  Dave greased the prop blade and any spinning parts.  He cleaned through hulls and their scoops (bronze covers to slow down the debris that can enter).  He added oil and antifreeze.  He cleaned the raw water screens for the water maker and the engine.  He also vacuumed any remaining water that he could see.  We want to be able to look for any new water.  The tough part is that water can be pooling in an area that won’t show up until the boat rocks again.  So it can take awhile to know if everything is sealed.
We met a young couple that were from North Dakota and Minnesota.  They just bought a used sailboat and brought it here to have some work done before they move aboard.  They have been living in a pop up camper.  We asked them to join us at the Wild Wings Cafe for dinner.  We discovered this restaurant in the Carolinas 4 years ago and were anxious to go back.  Great wings with lots of sauces made in house.  (Not Buffalo Wild Wings.)  It was fun filling their heads with all kinds of information.  We exchanged info and told them to contact us any time.
Posted by svluckofafool at 10:17 AM