We had been in contact with a good friend of about 30 years from South Dakota, Lorraine Himrich, over that past couple months.  She and her family were going to be in Boca Raton/Ft Lauderdale for a wedding and wondered if we would be anywhere in the area.  Well of course we thought we’d be in the Bahamas by mid January!  Over the past couple weeks, I had been sending her names of restaurants to try, but still thought we’d be gone.

Well, the weather window we thought we would have for tonight fizzled out.  So we made plans to meet this morning.  They had a family gathering Saturday afternoon, but came to West Palm Beach in the morning.  We finalized the plans last night and they were to be here about 9:00am.  I woke up this morning at 7:00 to hear someone on the shore singing the Star Spangled Banner then a lot of announcements over a loud speaker.  Somewhere in there I heard the work “marathon”.  So I googled it and found out there was a half marathon and a 5 K with the starting line right at the end of the city dock where we were to meet the Himrichs.  Now I was panicked thinking there wouldn’t be any place for them to park.  But it was supposed to be over by 10:00, so we went ahead with our plans.

They arrived about 9:30 and we met them at the city dock.  It was Lorraine, her son Aaron, girlfriend Anna, daughter Galen and boyfriend Kyle.  They were all in their 20’s.  Lorraine’s husband, Mark, was a classmate of mine in dental school.   But he passed away about a year ago after surviving a stroke for a year.

We gave them a tour of our boat and talked about our life on the boat.  Then we sent the 4 young ones out in the dinghy to let them rip around in the sunshine.  Aaron and Galen practically grew up on fishing boats, so we trusted them with the dinghy.

After about an hour, we all went to shore to have appetizers and Bloody Mary’s.  They are on vacation and needed a little “hair of the dog”.  We went to Brandley’s right on the shore and sat outside in the sun.  They were loving it.  It’s super cold back in SD and MN right now.

We talked about going back to SD this summer for a family reunion in the middle of the state.  So Kyle asked where that would be.  I said Miller, which led into “no way, my mom is from Miller!”  Come to find out, I baby sat his mom, Pam Engelke.  Small world.  He just couldn’t get over that he had been sitting on a boat in Florida with someone who knew his mom.

After they left, Dave walked about 1.5 miles each way to Hall’s hardware store.  It was an old style hardware store.  Dave said “it beats the shit out Home Depot.”  He walked past a couple upscale useless stores and was happy to find this one.  He needed a stainless steel threaded rod.  He had to buy a 3 foot long rod, but he can use it to make any size bolt and have leftover for future projects.

I took our laptop to the West Palm Beach city library to work on the computer.  I planned to walk to the St Ann Catholic church about 3 blocks away for the 4:30 mass.  I looked at my phone at 4:25, quickly shut everything down, packed up and practically ran to the church.  I was just a little late.  But halfway through mass, when I went to kneel, I got a cramp in my leg, which didn’t last long.  That’s what you get for sitting on a boat for a week and then trying to cover ground in a hurry. 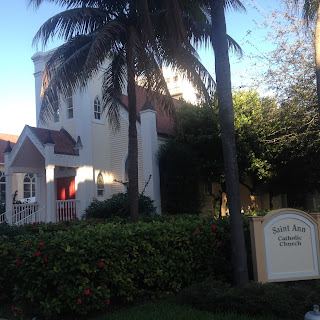 After church, I picked up a pizza to go and Dave met me at the dock.  We headed back to the boat for another evening of football.  Wow, what a game between Arizona and Green Bay!!  We’re sad that Green Bay is now out, but what a game with injured players.  26-20 in overtime.


Posted by svluckofafool at 9:36 AM