Dave listened to Chris Parker’s radio broadcast this morning.  He usually predicts the worse case scenarios.  We discussed the pros and cons.  After feeling equally good about staying vs going, we decided to stay.   The vision of our heavily provisioned boat pounding the waves at anchor wasn’t very pretty.  If we were wrong about staying, oh well.  We would get to enjoy another week in Florida.  If we were wrong in deciding to go, we could damage our boat or our bodies.  We are anxious to get there, but there was nothing we had to be there for THIS WEEK.

Dave had just talked to Brian Killion in Cape Coral, FL yesterday to tell him we were leaving.  We give them our “float plan” whenever we are moving the boat.  And Brian said “if you change your mind for any reason, let us know.  We’ll come spend New Year’s with you.”    So…Dave gave Brian a call about 9:00.  About a half hour later, Jackie called to work out the details.  They couldn’t leave until later, but would still make it tonight between 8 & 9:00.  We have spent New Year’s Eve with the Killions for YEARS.  We went to their home in Cape Coral the last 2 years.  And before that, they would come to our home in Rapid City.

Now we had to ask Bob and Olivia for another favor.  And yes, it would be no problem to register them as guest of theirs so they could park in the marina parking lot and access our boat through their slip.  We really owe them.

I spent the day going through our ditch bag.  We purchased a Sirius Signal this year.  It is a battery run light source that replaces the flares.  It can be used several times when you see a  boat or airplane.  A flare is lighted and over with the chance that no one saw it.  The food and water are in good shape.   We checked all the batteries in our VHF radio and GPS and our spare batteries and added batteries for the Sirius Signal.  We replaced Dave’s prescription drugs with new ones.  I put our medical kit in a ziplock bag.  Funny the things you think about each time you go through it.  We’re going to add sunglasses and hats now that there is more room.  And we’re going to add an additional strap that would easily attach to the life boat.  Because this bag would sink to the bottom of the ocean with me hanging on to it.

I am also putting together a list of things we would take if we had time to gather things. Then you don’t have to think about it at the time.  We have a dry bag that we could add phones, wallets, passports (we already have copies of them in the bag) clothing, extra food and water.  The movie “the Jerk” comes to mind.  “and all I need to take is this, and this….”  You have to know that everything on the boat could be lost, and you have to wrap your head around that and be ok with it.

Our navigation area (nav station) has a counter top meant for laying charts or a computer for navigation.  Well, when we are stationary, this becomes a work bench.  There are tools and parts for whatever Dave is working on at the time.  But when we are moving, this table gets cleared off.  It looked a little dusty in the corners, so I decided to clean off the surface.  That let to “what’s in this compartment” and this one, and this drawer.  So the 5 storage areas were gutted and cleaned.  You know how you have those drawers that collect all kinds of things that you don’t want to take the time to put away in the proper place?  Well, now that’s done.  I don’t think they’ve been organized since we moved aboard 2 years ago.

We went to shore to pick up Brian, Jackie and Devyn Killion about 8:30 pm.  We came back to the boat and visited until midnight.  Then we went out on the deck of the boat and watched fireworks all around us.  Lots of people were shouting Happy New Year and used noise makers from the surrounding condos.  But the coolest was the trumpets that sounded from some of the big yachts in the marina. 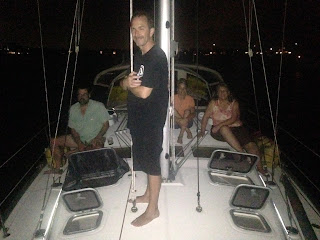 Posted by svluckofafool at 11:34 AM