Since I am behind on my blog, I am going to include some memories, jogged by my photos, of what we did over the summer.  Remember, we’re retired, so mostly we relaxed.
During our life on the water, we see friends come and go.  And we often meet up again.  Many of us feel that we get to know our boating neighbors better than we did in out land dwelling homes.
On June 1, two boats with sailing friends left together to head up the East Coast this summer.  Deby and Bjarne Lantz Sørensen on Lantz-a-Lot and Gene Shannahan on Tosh.  We will miss them.

Dave finished replacing the air conditioner duct work.   That created the job of cleaning all the accessible areas that haven’t been touched since we bought the boat 7 years ago, and probably since it was built in 2007.

Another going away party.  Sylvia and Bill Mueller have been friends since we first stayed at Brunswick Landing Marina in December of 2014.  They are from St Paul, MN, so we have that bond.  The sad part about their departure is that they are selling their boat.  But you never know when and where you will see each other again.  We’ll miss their great sense of humor.

Bill couldn’t separate their water hose from the spigot on the dock.  Dave volunteered to help, but broke off the fixture, which involved shutting off the water to our dock to repair.  (See the water fountain to the right of Bill.)

Pete starting working again in June after his 4 month hospital stay and recovery.  He took some time to think about what he wanted to be doing.  He said he was always his happiest when making bread.  Rather than apply at restaurants or bakeries, he decided to check with the grocery store chains.  They will have better schedules and benefits.  He was hired by the first place he applies, also his first choice.  The Publix chain is a wonderful business in the south.  Only employees can own stock, hence the name Publix.  Their service and image are important.  They are starting him in the meat department, but will also train him in the bakery.

What a better way to celebrate the first day of summer than to have Nan’s hibiscus bloom. 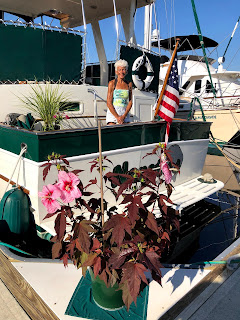 We replaced the through hulls while the boat was out of the water last month, but Dave needed to finish the job of replacing the hoses to the heads.  Not a pretty job.  The photo of the old hose shows the build up on the inside walls.  Besides decreasing the efficiency of the heads, the hoses begin to stink over time.  Have I said lately how much I appreciate the work Dave does to keep this boat floating and functioning? 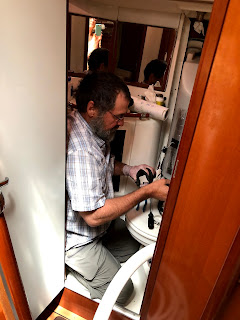 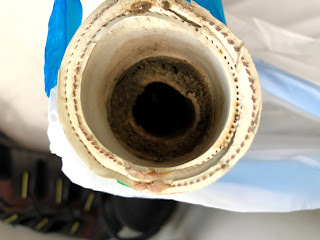 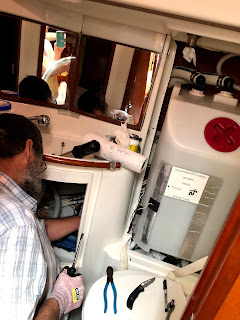 Posted by svluckofafool at 3:07 PM