July 4
The city fireworks were cancelled this year.  They are usually right across the water from our marina.  This year, we decided to make use of the fire pit and have our own bonfire.  There were still several people in the neighborhood with fireworks, so we enjoyed what we could see from the comfort of our chairs. 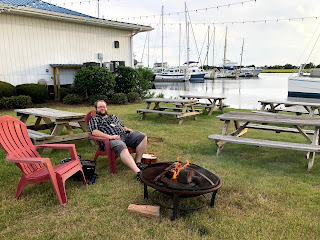 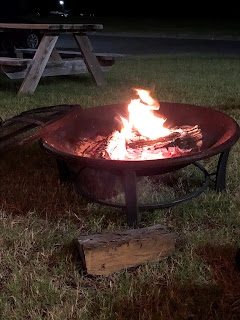 July 5 dolphin video
I have given up on trying to get photos of dolphins.  They disappear quickly.  I decided to take this video for several friends that ask for photos. Enjoy!

The clubhouse was closed for any gatherings earlier this month.  A few ladies were doing yoga together in the mornings.  We decided to start walking together.

It was very hot July 14, so we decided to go for a walk on the beach on Jekyll Island.  The beach was great, but crossing the dunes was REALLY HOT.  There was no breeze, and the sand almost burned our toes. 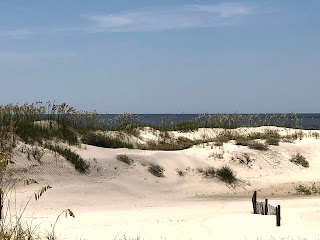 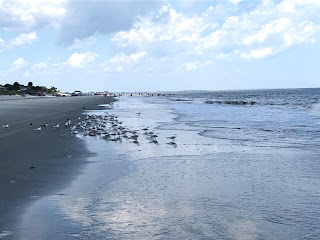 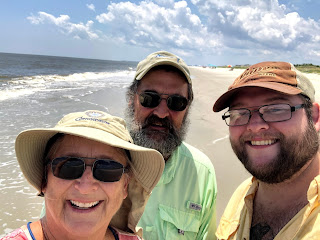 A new brewery opened downtown Brunswick.  It was supposed to open at the first of the year.  We were impressed with their brews.  Another Dave from our dock joined us. 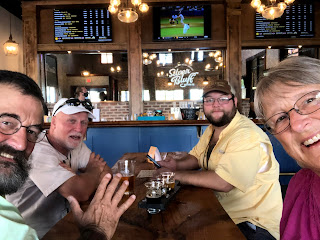 Many boats make shades to block some of the sun while docked in Georgia.  Dave saw another boat with yard and garden material and thought that would be better than tarp material.  So he ordered the material and went to work. 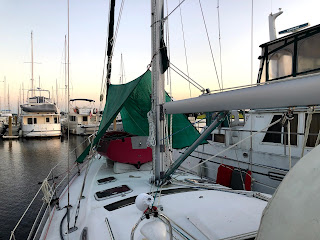 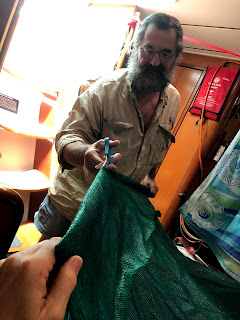 An ongoing project is replacing the bimini and dodger.  After looking at several other boats, we decided to replace the top of the dodger with a hard top.  Dave found the material he wanted and had it shopped here.  He has been putting off this project during hurricane season with the rains and winds. 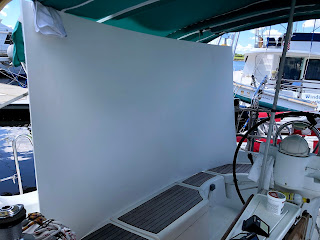 A local bar downtown started having open mic on Tuesdays.  Pete sang several songs 2 weeks on a row.  I used my phone to record him.

Here is a traditional Irish Song, Pig's Can't Swim.  One written with his previous band, Dancing Party.  And my favorite, a cover song by Neil Young, Old Man.  If you want to see more, check out Peter A.E. Roth on YouTube.com

Posted by svluckofafool at 2:31 PM