For the past several weeks, we have been making and canceling and remaking travel plans.  Dave’s mom, Alice, would be turning 89 on August 19, and we wanted to be there to celebrate with her.  We debated on whether we should travel with the covid 19 pandemic.  And we were also worried that we could expose her to the virus.  After much consideration, we decided to go.  We rented a cabin for 5 nights about 20 miles from her home in Luck, Wisconsin and invited Dave’s brother and sister to join us when they could.

As the date drew near, Alice panicked about the increase in covid cases in their community, so we cancelled our plans.  We were within the 30 day cancellation period for the cabin, so we couldn’t get our money back.  But we could use it at a later date.  Fine, we would go later in the year or the next summer.

We then decided to take advantage of the rental car (which we could easily cancel, but…).  We talked to friends in 2 different areas about visiting them.  Great!

Then Alice called back and wanted us to still come.  She was actually getting depressed about not seeing us.  OK, we were still able to get our cabin.  And we cancelled the plans with the friends.  They understood and would take a rain check.

We left Brunswick August 15 for the 20 hour trip.  We weren’t in a hurry, so we had an enjoyable trip through the beautiful states between Georgia and Wisconsin.  We packed some food and stopped at parks for breaks during the day.
8-15 Collerton Stqte Park, SC 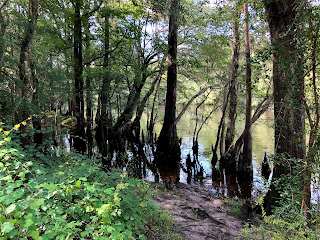 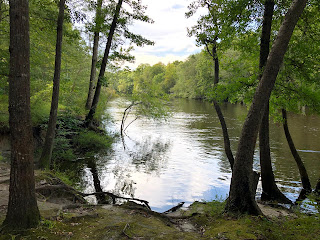 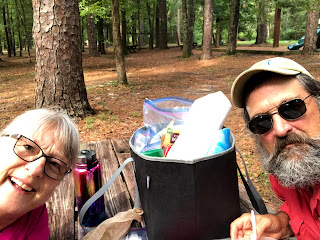 8-16 Pigeon River on the NC/TN border 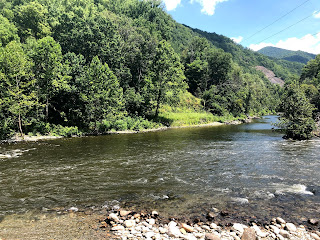 8-18We made it to Cumberland, WI today.  We picked up Alice and groceries and headed to the cabin on Big Butternut Lake in Luck, WI.  We had our favorite WI dinner at the cabin, brats and corn on the cob.

8-19
Today was Alice’s 89th birthday.  Over the last week, I set up a FaceTime telephone call with Alice and her 2 sisters.  Maggi is 82 and lives in California.  Dottie is 91 and lives in Texas.  The three of them really enjoyed the conversation, especially with being able to see each other.  Alice used my iPhone, Dottie used her daughters, and Maggie had her own iPhone.  So this isn’t something they can do on their own.  It was a great way to start her day.
We had rented a pontoon for the day.  Dave, Alice and I had a nice afternoon on the lake.  Alice enjoyed fishing, catch and release. 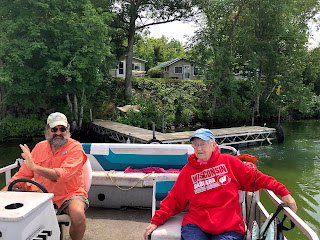 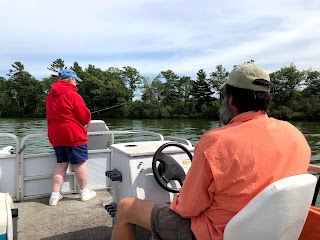 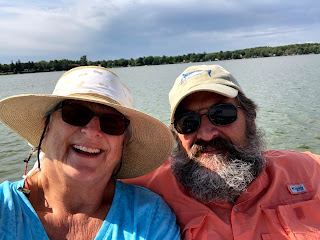 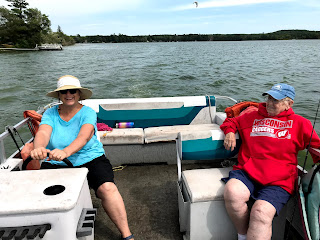 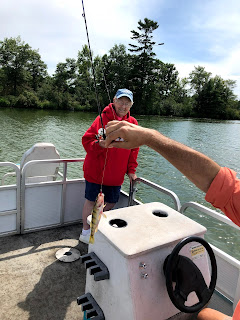 Dave’s brother, Dean, sister, Debbie, and her significant other, Randy, all joined us for dinner that night at the cabin.  We all went for a sunset cruise on the lake.  It was a beautiful night on the water. 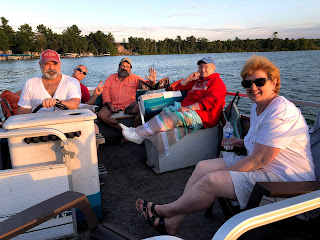 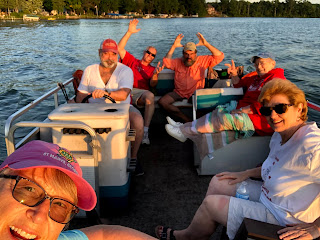 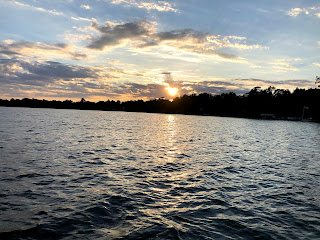 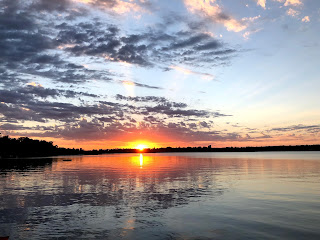 Debbie lives between Luck and Cumberland, Wi.  We all went to her home for brunch today.  Dean was also staying at her home.  After spending most of the afternoon at Debbie's, Dave and I returned to the cabin and had leftovers.  Dean, Debbie and Alice went to a farmers market in the area.  Dean brought Alice back to the cabin, and we had a nice evening visiting with him about his job as a police officer in Minneapolis.  There have been many riots in the city this summer.  Tough job!

8-21
We had a fun day at the cabin playing some games and relaxing.  The neighboring cabin showed us a fun game that they brought with them.  It was a horse betting game that involved a board, dice, cards and money.  We spent $10 each and came out even. 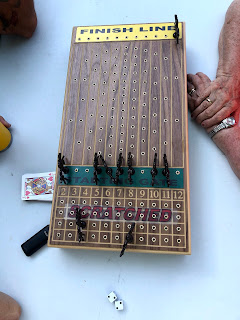 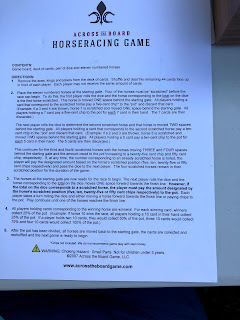 8-22
We rented the pontoon another day.  Dave, Alice and I spent time on the water, with Alice fishing again.  Dave’s family joined us for dinner.  Then we took another sunset cruise with everyone. 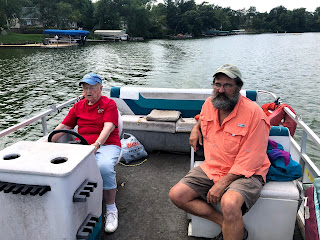 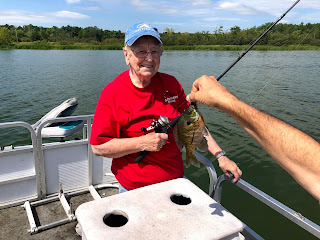 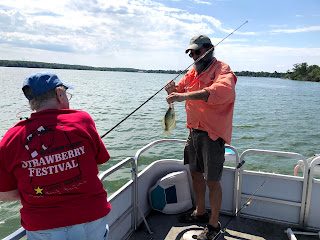 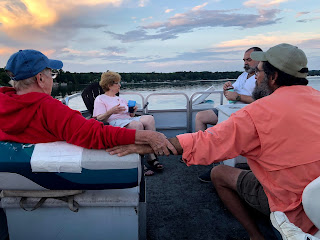 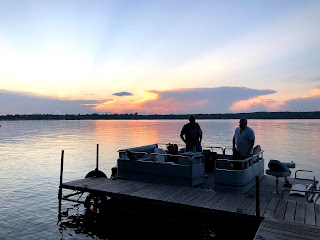 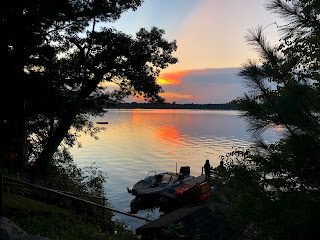 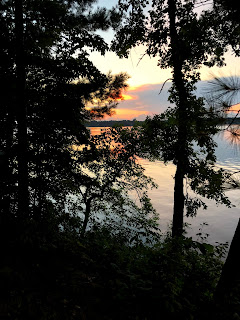 8-23
We checked out of the cabin today and took Alice back to her home in Cumberland.  We left for Minneapolis to see friends, Joe and Erin Claussen. 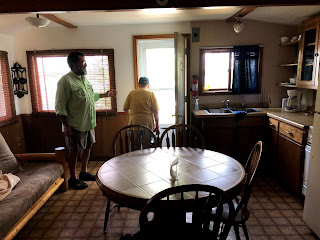 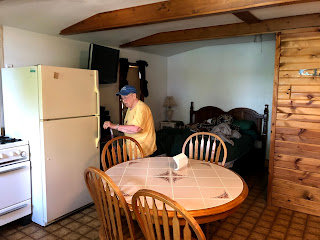 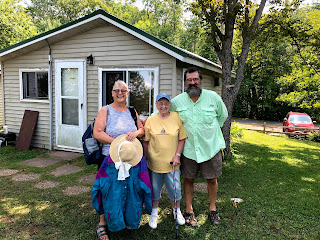 8-24
We spent the day driving through MN and WI to see a couple other friends.  First we met a friend for lunch in Winona, MN.  Kermie is someone Dave met online in an online game, Pirates of the Caribbean.  She found out we were going to be in WI and wanted to meet us in person.  I was giving Dave a hard time about her being his “ax murdering online girlfriend”.  If your kids met someone online, you would caution them not to meet them.  But we figured we were safe meeting her together and in a public place, lol.  It really was a nice meeting.

Then we drove to a farm near Ellsworth and Maiden Rock, WI to see a friend from Custer, SD.  Lorraine Himrich was at her sister’s farm helping her after her surgery for a brain tumor.  She raises long haired sheep for their wool and meat.  So Lorraine has been doing the chores.  Kate is also an emergency room nurse in St Paul, MN.  This is her “hobby farm”.

8-25/26  We went back to Cumberland for a couple days to help Alice with some things in her home.  Then we headed back to Georgia via the upper peninsula of Michigan.  We spent the first night in a cabin on Lake Gogebic in Michigan. 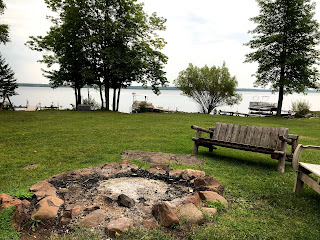 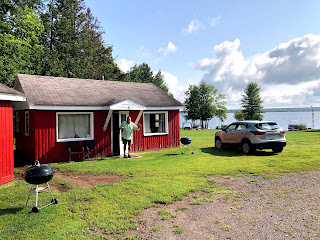 Posted by svluckofafool at 6:05 PM