Wednesday, September 18-I flew to Sioux Falls, SD to attend a 45 year high school reunion in Miller, SD.  Before leaving Sioux Falls, I visited a dear friend in the hospital.  Sheryl Gerdes Bedard and I have been friends since first grade.  She had hernia surgery on the 16th.
Thurdsay-I rode to Highmore, SD with another grade school friend, Lori Landgrebe Schneller.  We spent the night with her sister, Jody Landgrebe.
Friday- homecoming weekend.  We helped finish decorating our class float and greeted classmates.  We were in the homecoming parade that afternoon.  Then we spent the evening at the football game and socializing with classmates.
On Saturday, our class had a catered banquet at the Firehall. 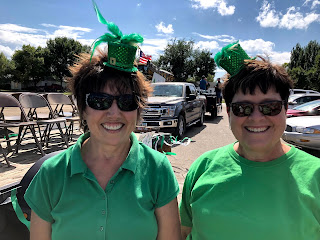 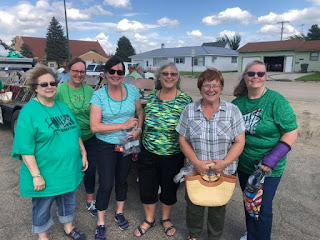 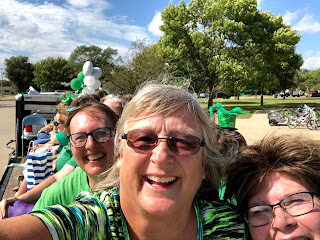 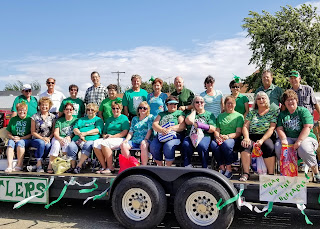 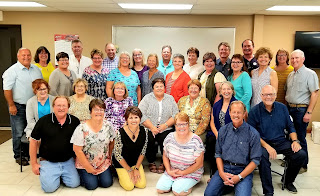 On Sunday, I went to church at St Ann’s Catholic Church.  I grew up in this parish and was married here.  They had just finished a new community center that was connected to the front of the church and had an open house after mass.  It was nice to be able to visit with more friends and family.  The old center was not connected to the church.  On the night before my wedding, December 17, 1977, it rained and then snowed.  I dressed in the center, but had to go the the church via a sidewalk covered in ice .  I picked up my dress and 2 people slid me down the sidewalk to the church.  Thank goodness the buildings are now connected.


On our drive back to Sioux Falls, I chipped an upper right molar on popcorn.  On Monday, I decided I should chew on it to see if it needed attention.  After lunch, the porcelain crown on a lower right molar broke in half.  I called around and found a dentist still practicing that remembered me and had time to temporize my tooth, Dr. Dwight Louden.  I had worked in his father’s orthodontic practice as a dental assistant in the mid 70’s, so we always visited at dental conventions.  As my father would have said “good old American know WHO”.
I planned to stay in Sioux Falls a little longer to help Sheryl in her home after surgery.  On Sept 24, she was moved to a nursing home for rehab.  I helped move all of her belongings and get her settled.
On Sept 25, I had lunch with a Ski for Light friend, Kylie Forth, from Australia.  She had been in Canada for the World Blind Sailing competition and extended her stay in Sioux Falls to see other Ski for Light friends.  She took first place in her division!  I was the first person she had visited with that knew anything about sailing.  I really enjoyed hearing about the competition, and she enjoyed sharing. 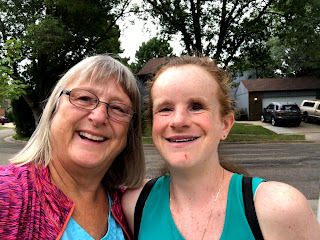 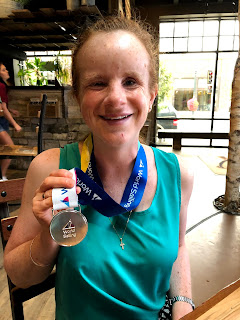 Sept 26 Thursday
I road with Lori Landgrebe Schneller to the Black Hills today.  She was going there for the weekend for the annual buffalo round up.  Since Sheryl was in a rehab facility, I decided to see friends there.
We met her sister, Jody, from Highmore, SD at a restaurant so Lori could go on to Custer with her.  I was able to keep her car for the weekend.
I met friends at one of the local breweries.  Their runner’s club meets there on Thursday nights.
Sept 27 Friday
I was able to have coffee with my usual coffee friends on Friday morning at Black Hills Bagels.  Always fun to see all of them.  Next I drove to the KOA in Rapid City to see a dental school classmate of mine.  Diane Zimmerman Schad was there with her husband, Mike.  Their son is attending SD School of Mines and Technology.  Great to catch up with each other’s lives. 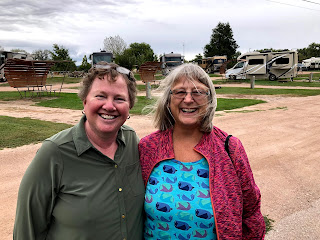 I had lunch with my Rapid City friend, Cheryl Ulmer.  She no longer lives in Rapid City, but was here between jobs as crew on sailboats.  She usually spends the summer in SD seeing friends and family.  Nice coincidence to be here at the same time.  I stayed with long time friends, John and Tami Petersen.
Sept 28 Saturday
A Ski for Lighter from Chicago was in town.  So there was and impromptu meeting of about 12 other Ski for Lighters at the Wobbly Bobby about noon Saturday.  Fun to surprise them and visit.
On Saturday afternoon, I drove to Custer to meet up with Lori and her family.  I hadn’t seen her brother Dave, his wife Diana and her sister Susan for some time.  The girls moved on to another venue for dinner, the Custer Beacon.  We met up with my friend, Lorraine Himrich, and enjoyed some country western music.  John and Tami Petersen joined us, too.  We even ended up dancing with a few locals.  We stayed in Custer for the night. 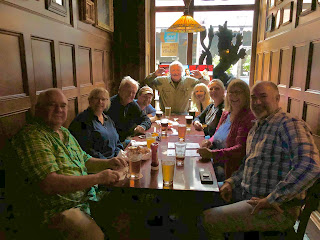 Sept 29 Sunday
I had breakfast in Custer with Lorraine Himrich and a friend of hers I had met years ago, Margaret ??
Lori and I drove back to Sioux Falls that afternoon.
Sept 30 Monday
Sheryl had ended up back in the hospital over the weekend.  I went to the rehab center and picked up her belongings.
Sept 30 Monday
I had Uber pick me up about 4:30 am to fly back to GA today.
Posted by svluckofafool at 1:28 PM