On Thursday, November 21, we drove to Daphne, Alabama.  We hadn’t been there since we moved aboard our sailboat in December 2013.  We drove around the condo complex where we had lived and through Fairhope past where I used to work.  We had dinner at one of our favorite restaurants, Felix’s Fish Camp.  We enjoyed the local seafood-crab claws, oysters and shrimp.  We must say that we like GA shrimp better. 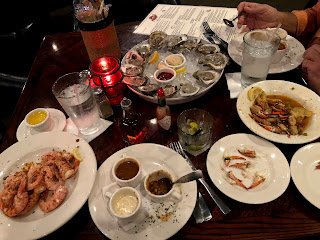 On Friday we went to the Mecca for crawfish, R&R Seafood Restaurant.  We have not been able to find boiled crawfish east of Alabama.  This place has the best seasoning!  At this time of year, they serve crawfish until they are gone.   That’s why we arrived when they opened at 11:00am.  We bought a total of 10 pounds.  We ate 5 pounds at the restaurant (no sides) and took 5 pounds with us.  If you’re not familiar with crawfish, you only eat the small tail.  Dave does suck all the gunk out of the head, but not me.  That afternoon, we drove to Tuscaloosa, AL.  We enjoyed more crawfish in our room that night with cold beer. 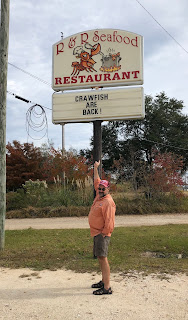 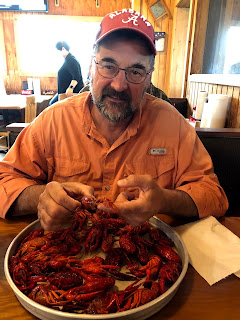 GAME DAY!  The main purpose of this trip was to attend a football game at the University of Alabama.  We have been supporters of their team since we moved to Alabama in 2012.  ROLL TIDE!!  We were able to take a shuttle to the game.  Dave didn’t care how much it cost.  He hates driving in traffic.  We arrived early enough to see the team enter the stadium.  The students and fans line the sidewalk and cheer them on about 2 hours before the game.  Then we walked around the campus and the stadium before the game.
I am not good at editing videos.  After the camera levels out, you will see security escorting the coach, Nick Saban, right behind the two guys in hats.  Then the team follows them in. 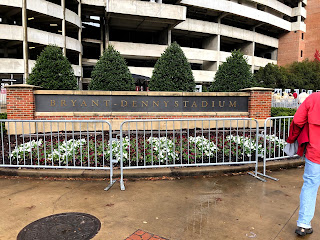 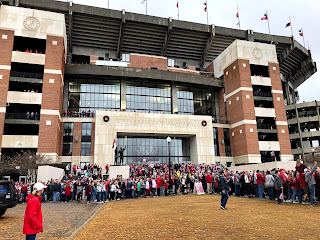 Seeing the inside of the stadium was awesome.  It was fun to see all that happens that you miss on TV, and especially on Tune In Radio.  The “Million Dollar Band” was impressive with all 400 members.  And there must have been about 10 different cheer/dance/flag teams.  When the band formed an elephant and played Tusk by Fleetwood Mac, I came up with my own theory on why their mascot is an elephant.  Because of the tusk in Tuscaloosa. 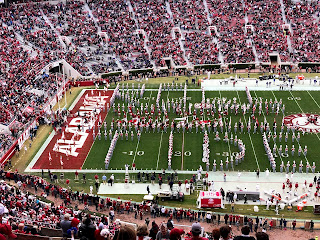 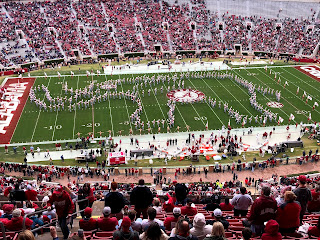 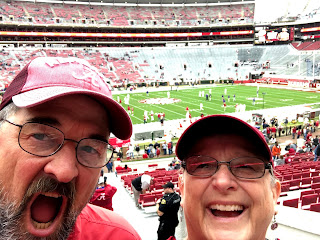 They won the game, even without their starting quarterback who had a broken hip.  They played Western Carolina Catamounts, a smaller school.  That’s why we could afford the tickets.  It was really a fun day for us.

On Sunday, we drove to Fort Payne, Alabama on Look out Mountain in the north eastern corner of the state.  We visited South Dakota friends, Vern and Ella Shafer.  We met them through Ski for Light.  Ella is originally from Georgia, about 2 hours across the state line.  They bought this cabin on a couple acres of land and spend their winters here and summers in South Dakota.  Since it was close to Thanksgiving, Ella made her typical southern Thanksgiving dinner, which was delicious!! 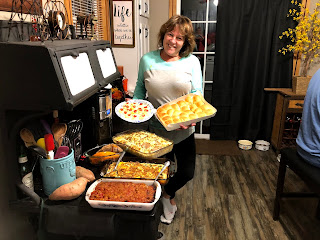 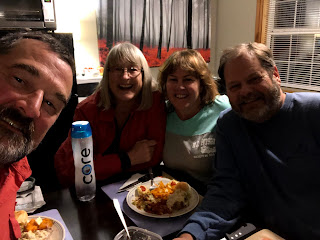 On Monday, we walked around their property and to the nearby nearby river gorge.  Beautiful view and peaceful area.  We headed back to Brunswick by early afternoon.  On the road, we decided to visit a friend in Atlanta, Deb Louchart.  After a nice evening, we drove home on Tuesday.  It was a great road trip between the game, friends and food. 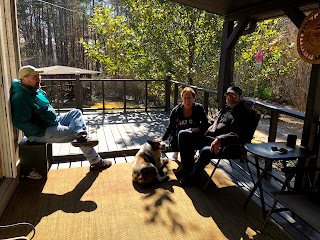 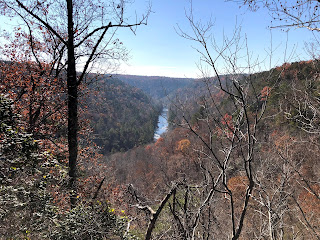 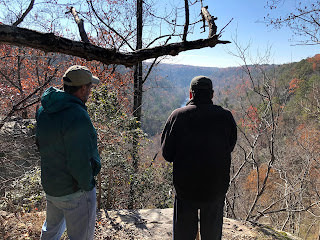 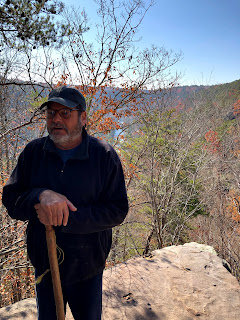 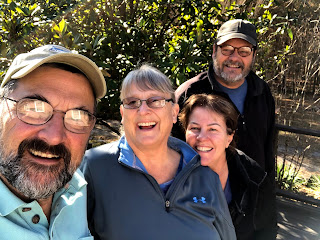