Harold and Juli wanted to explore the island today.  So we went along as “tour guides”.  As my friend Martha once said “and for $19.99, we’ll throw in DAVE”.  We rented a golf cart and picked it up at noon at the main dock in town.  Harold drove and I was the “naviguesser”.  When we came to the part of the road where you can see the Sea of Abaco on one side and the Atlantic Ocean on the other, we just pulled over and visited for awhile enjoying the view.  We watched two guys attempting to surf.  Then we back tracked to a restaurant that was recommended called On Da Beach, which is on the Atlantic side, east side.  Last week when we stopped, the wind was out of the east and too windy to eat here.  Today the wind was out of the west, so it was much better.  We realized on the way here that it was Fat Tuedsay/Mardi Gra when we saw another golf cart all decorated in beads.  I ordered a beer, Juli ordered their specialty rum drink, Dave ordered an iced tea, and then I said “wait, since it’s Mardi Gra, I’ll have one of those, too.”  The waiter said “OK, a Mardi Gra iced tea” and kind of shook his head teasing me.  That set the mood for us.  I had a burger and the others had a grilled fish melt with jerk seasoning and everything was great.  They had tried the Bahamian side of peas and rice yesterday.  So they had the Bahamian mac and cheese today.  It is baked and served like a piece of cake.  This was seasoned better than most that I have had.  Great meal and great stories.  Harold really got a chuckle when he learned that we call Dave a “situation enhancer” whether it’s good or bad. 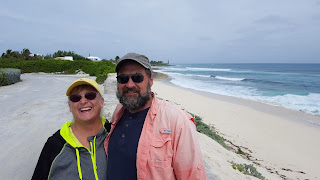 Then we moved on to Tahiti Beach.  This would be about my 5th time here, but never with the tide this low.  We could walk out much further into the bay.  We found live conch, starfish and mangrove jellyfish.   We found out from Sue and Kate this weekend that there is a beach further south where you find the sand dollars and sea biscuits.  We did find one sea biscuit here.  It was kind of chilly, so we had the beach to ourselves.  It did seem a little strange to be putting on jackets and taking off our shoes and socks all in one motion.  But the water felt warm, especially as shallow as it was.

We stopped at the Sea Spray resort after the beach (closest bathroom).  Harold enjoyed walking the docks looking at boats.  Then Dave and Harold found some local guys hanging out at the fish cleaning station on the dock.  They visited with them about fishing and got the name of a fishing guide they all recommended.  His name is Justin.  They told them that his daughter, Justine, had an accident and just had reconstructive surgery.  So he could really use the business right now.  I had heard her name in church the last two weeks asking for prayers for her recovery.  And part of the proceeds from the Farmer’s Market were going towards her medical bills.  It really is a small island.

We decided to have a beer before leaving.  It was only in the 60’s, but the Doerr’s were still loving it.  They had a beer I hadn’t seen.  It was made by Kalik, which I have had, but it was grapefruit flavored.  It reminded me of a wine cooler.  Boy, my sister Bev would have liked those.

We enjoyed checking out the condo and homes scattered though out the island.  Harold was even getting pretty good about driving on the left side (or PROPER side as Rinssor put it) with out me reminding him to move over.  We stopped at the Food Store to show them how well stocked it was compared to the grocery stores in town.  Harold found a bag of lobster tails in the freezer that were in ziploc bags.  That is a good sign that they were caught locally.

Next stop was the Sweet Shop.  Harold had noticed earlier that they were advertising key lime pound cake.  Last week we considered stopping here for ice cream.  Today coffee sounded better.  We bought 2 pieces of the key lime pound cake to share between each couple.  It was similar to the lemon cake with the icing that seeps down into the cake.  We also bought one piece of the potato Johnny cake to share.  Now I wish I had photos.  They said this is more traditional than the baked Johnny cake that is served with souse.  This was about the size of an English Muffin and fried.  She sliced it, warmed and buttered it, then cut it in fourths for us.  Very good!  And the coffee hit the spot.

When we got back to town it was just about sunset.  We found Justin’s sign at the dock advertising his fishing charters.  So Harold called him and we set up a half day fishing charter with him for Friday.  If the weather looks better, he will call us and change it to Thursday.  That would give us a couple days to sail elsewhere with the Doerr’s on board before they leave on Sunday.  We had planned to go back to the boat before dark.  The Doerr’s were thinking about going out for dinner.  Dave said that he thought returning in the dark would probably be ok since it wasn’t as windy tonight, if I wanted to stay.  OK came out of my mouth pretty fast.  After all, tomorrow is Ash Wednesday, AND my birthday.  It seemed more appropriate to celebrate my last day of being 59 tonight.

I recommended Wine Down Sip Sip.  Dave didn’t remember it, but he hadn’t walked around the island as much as I had.  I have passed it several times but had never been there either.  They always have a board outside with there specials that look yummy.  So off we went.  It is on the upper road of the two roads in town.  It had about 6 tables in the center of the room and 2 tables along the wall with cushioned benches and big pillows.  We all headed right for the pillows.  They had some unique menu items, so we had another culinary experience.  We ordered an appetizer that I can’t remember the name of, but it looked like a Mexican empanada.  It was a pastry filled with beef, onion, peppers, etc.  Then it was served with a jalapeño jelly.  They also had “conch flitters”.  Conch fritters are like hush puppies, round deep fried balls.  These were flat and more like a crab cake and very good.  Dave ordered their pulled pork sliders that came with coleslaw on them, like you see in the south.  The Doerrs and I had the pasta special: a red sauce made with spicy sausage, mushrooms and onions served over bowtie pasta and they added chicken.  It was very yummy.  Their happy hours was 2 drinks for $6.  We literally ate our way across the island today and loved it.

We were taking photos of each other and a group photo in the restaurant.  Then Dave used an app he has on his phone to add a ghost to the window behind where Juli was seated, Snap Ghost.  We had her going for awhile.  Dave forgot that you have to save the photo.  So we don’t have the photo to share.

We had worn our foul weather gear today because of the wind.  They felt really good going back to the boat tonight.

Posted by svluckofafool at 8:10 AM