Doerrs arranged a half day fishing charter for this morning.  So we set a couple alarms for 6:00 am.  We had breakfast, packed a couple bags for the day and were in the dinghy by 7:30.   We met the charter boat at the Hopetown Inn and Marina by 8:00.  The boat’s name was Local Boy.  The captain was Justin and JR was his only crew member.  We headed out to the Atlantic Ocean around the north end of Elbow Cay. We went off shore about 3 miles to a shelf that ran north and south about 200 feet deep.  We ran out 4 fishing lines with Ballyhoo as bait, a fish about 8 inches long, on a bait holder/lure.  Then we ran the shelf one direction and turned around and ran it again over and over. 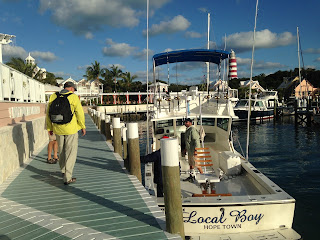 Justin told us to set up a “pecking order” for bringing in the fish.  Once there was a fish on, the first person sat in the main chair and brought in the fish.  Then we rotated through the order.  Harold insisted that Dave be the first one.  So we insisted that Harold go next.  Then we wanted Juli to be third and I would be last.  2 lines went directly behind the boat and two lines were held out away from the boat with down riggers.

Dave brought in the first fish, a 3 foot Wahoo.   Pretty exciting.  We went some time without catching anything.  Then two hit at once.  Harold was in the chair and Juli had to bring hers in sitting on the side rail of the boat by the fishing rod.  They were also wahoo about the same size as Dave’s.  We didn’t catch any others that morning, but I really enjoyed being along for the ride and being a photographer.  Justin said the least they usually get is 6, but this was plenty of fish for us to eat this week and put in our freezer. 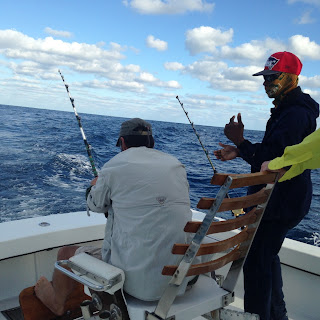 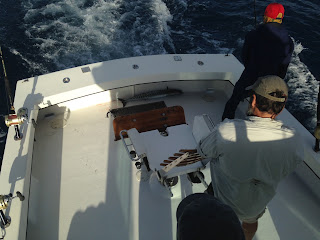 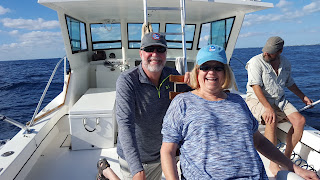 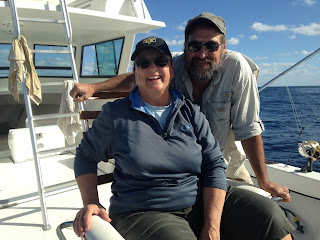 Back at shore, JR cleaned and filleted the fish for us and bagged them.  Back at our boat, we cut them into serving sizes and put them in smaller bags.  Some for us to eat in the next couple days and the rest in the freezer.  Justin said to just get the air out of the bags and if any water is on them, it should be salt water, not fresh. 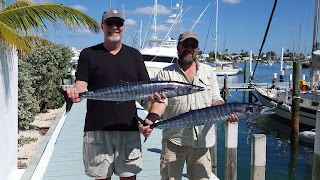 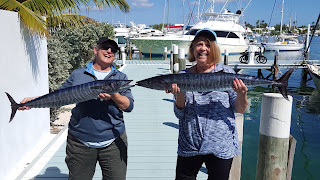 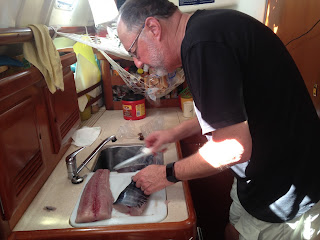 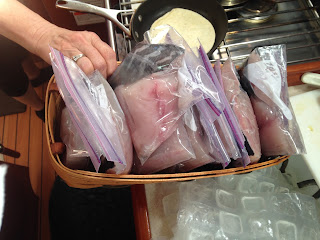 We fried up some smaller pieces right away along with some onion and peppers and had fish tacos for lunch.  The wahoo was excellent.  After lunch, we decided to take the dinghy to the north end of Elbow Cay.  Dave and Harold planned to do some more fishing from the dinghy.  They dropped me and Juli off at a beach to hang out.  It was close to low tide.  They brought us in as far as they could.  We had to get out of the dingy in knee deep water and walk to the shore.
The guys took off for fishing.  We could see them off shore from where we were.  And we could occasionally hear Dave’s laugh carry across the calm water.  They caught about 6 fish and released them.  They figured our freezer was full already.  They weren’t sure what they were.  One type was yellow with stripes and the other was white and long like an eel.  All were in the 12 inch range.


Back on shore, Juli and I had a day of discovery.  We walked the beach and found all kinds of things.  We saw sea hares, which we had researched last year and figures out what they were.  We also saw starfish, sea urchins, and sea biscuits in the water.  We found something I’ve never seen before.  It looked like fan coral about the size of your palm.  There were several of them standing upright in the grass.  I picked one up and it felt like I pulled the root out of the sand.  And it had snails attached to it.  I sent a picture to my friend Cheryl to research it for me.  We also found several live conch.  We brought 6 of them together in one spot in the water.  We thought we would pick the two largest when the guys returned and take them back to the boat for conch salad (ceviche).  As we walked the beach, we would return to check on them occasionally.  There would be 2 or 3 that were heading off in another direction.  So we’d pick them up and bring them back to the same area.  We told they guys we were herding conch at our conch ranch.

After our exploring, we sat on the beach and had an adult beverage.  Kalik beer makes a grapefruit or a lemon flavored beer that is similar to a wine cooler.  Juli put 2 of them in a water bottle to take along.  When she opened the straw top to the bottle, it exploded up into her face and hat like a beer that had been shook.  We didn’t see that coming.  But we had a great laugh. 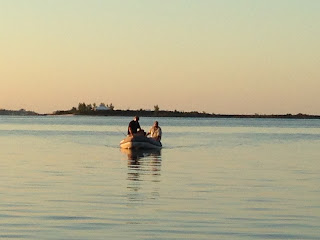 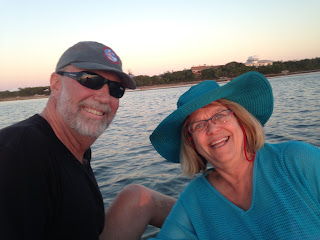 Back at the boat, Dave cleaned two conch.  He was much faster at it this year.  Juli was glad she had already tried it before she saw how ugly they were when they came out of their shell.  They are skinned before you eat them, then they look like white fish.  We made a conch salad with raw conch,  orange and lime juice, onion and peppers, salt and a little hot sauce.  We ate it with crackers, added some cheese and meat and called that our dinner.  We topped that off with another fresh key lime pie from Vernon’s.


Posted by svluckofafool at 8:41 AM