Today Dave worked to connect the AIS-automated identification system- with the chart plotter.  That way we can identify boats that are seen on our radar.  We can all them through DSC which sends out a signal to the other boat.  Also, at this time, we have the AIS in the Navigation station below deck.  When it picks up another ship, it starts to beep very loud.  If you aren’t on watch, sometimes you are sleeping.  So Dave is also trying to have that on/off switch outside, too.  His day ended in ordering a $100 part that will make the connection easier.

I needed to go to shore to find a notary public for a piece of paper I needed to become a Florida resident.  Our bank wasn’t within walking distance.  And the first bank I called said I had to be a  member of their bank to use their notary.  I found a place yesterday, but the notary wasn’t in for the afternoon.  So I called today before leaving.  He was leaving shortly, but would be back at noon.  You hesitate, you lose!  So at noon I went to shore and walked about 6 blocks to find him at Cartridge world, a mail center and print shop.  Then I had to hustle back to the boat to have this document scanned and e-mailed back to South Dakota, so they could e-mail me something that I could print.  This explanation is just to show you how complicated things can be when you live on a boat and don’t have a car.  We are really glad we have a portable scanner and printer on board.  I’m not sure where we would have gone to do all those steps.

I spent part of the afternoon cleaning the heads.  With that being done, I felt better about being a tourist this weekend.  Late afternoon, I went to shore to pick up a package we had sent to the marina.  When we know we will be in one place for a few days, we order the things we have on a list.  As I was returning to the boat in our dinghy, I was shot at by a cannon on shore.  It was on the shore where I could see an American flag and several cannons.  There was a group of people there and all the building had red, white and blue banners.  I think it was a veteran’s group commemorating D-Day.  I didn’t take it personal.

Today our package was our new bug screens to block the No-see’ms.  Yeah!!  What we have now is a rigid screen that is on the inside of the boat.  Each one has 8 little toggles to hold it in place.  But they don’t seal very well around the edges.  Plus if it starts raining, you have to remove the screens to close the windows.  The new ones sit outside over the top of the hatch and have lead weights to hold them down on the deck all around the hatch.  We’re not sure how well they will sit there in a high wind.  So we’ll probably bring them inside anyway.  Dave found out that there may be bugs on the outside of the screen, so you have to check that when bringing them in.  Plus if it has already started to rain, they may be wet.  So far we have just put them in the head when we bring them in.  I guess there are trade offs with everything.

The wind was starting to pick up when I went to shore for the packages, so we decided to skip the music at the Irish Pub and spend the night on board. 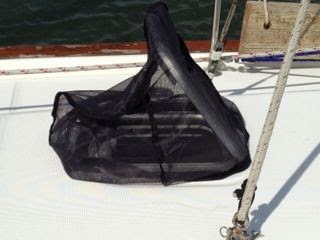 Posted by svluckofafool at 4:45 PM