My mother always said “bad things happen in three’s”.  Well this was one of those Mondays.

We wanted to spend a day out on the water sailing with Pete.  We ate leftover egg dishes for breakfast and opened one of our cans of bread for Pete to try.  It is a sweet bread, so was good for breakfast.

We headed out of the harbor about 11:30am.  We motored about 3-4  miles south because of the direction of the wind.  Then we put up our spinnaker.  We’ve only used it once before, so we wanted the practice while we had another hand on the boat.  We also tried using the whisker pole, which attaches to the mast and to a corner of the sail and holds the sail out away from the boat.  It is very helpful if the wind is directly behind you.  But it was too squirrelly with the pole, so we will probably only use it with the genniker sail (the forward sail).

Using the spinnaker, we moved north towards the seven  mile bridge.  We decided to go under the bridge (motoring) and anchor on the other side in shallow water to grill chicken.  Once we were on the south side, we realized that the depths varied a lot.  So we decided to anchor just north of the channel under the bridge where we knew the depth.  This was about 3:00pm.

With Pete at the helm, I was able to go forward with Dave and learn how to anchor with this boat.  Once we dropped the anchor, it wouldn’t set.  We were dragging it along the bottom.  So we decided to pull up the anchor and move elsewhere.  Once we got the anchor up to the boat, we saw that we had snagged a line.  Dave thought it was another anchor line, but later decided it was from a crab pot.

There was a current moving south, back towards the bridge and out to sea, since it was approaching low tide.  So we had Pete keep us in gear moving north away from the bridge and another fishing boat.  Dave climbed out over the bow and cut the line free from our anchor.  Immediately after it was free, we heard a clunk clunk and Pete took the motor out of gear.  We set the anchor again and headed back to check out our worst fear.

Bad thing #1:  the line followed the current under our boat and wrapped around our prop.   Dave got on his swimsuit, mask, fins and snorkel and went in to check it out.  Dave has a deadly looking blade just for this purpose.  The current was so strong that he couldn’t swim forward to reach the prop.  The blade was made to fit the poles we use for fending off other boats or pilings.  That gave him about 5 feet of extra length.  So he went back under, hanging on to our swim ladder with one arm and reaching to cut the line with the other hand.

Pete and I discussed how we would quickly release the dinghy to go after him, if he lost his hold on the ladder.  We also tied a dock line to the side of the boat and let it trail backwards in the current.  Maybe he would be able to grab it as he went by.  We also were waiting for a shark to come check him out, since we had seen them in this area last week from the bridge.

He was able to get it cut away in about 20 minutes, seemed like an hour.  There was also a piece attached to our keel that Dave released before started our engine again.  We decided to just get back to the marina and grill once we were back safe and sound.

On the way back, we shared a large apple to hold us over.  Bad thing #2:  Dave started to get a toothache.  He had a filling done in March that had continued to bother him, but now he was also having pain on the lower right.  Guess we will have to deal with this before leaving for the Bahamas.

When we were safely back in the marina, we all decided Pizza sounded pretty good.  So we went to the place across the highway that wasn’t open last night.  On the way back to the boat, I made Dave go by a neighboring boat to take a family picture of us.  Then back at the boat, I gave Pete a haircut.  He wanted his head shaved and wished he had done it earlier in the week.  This was the first time I have shaved a head and I didn't nick him, so I guess I did ok.

Back at the boat, Dave decided to run our generator for power while Pete and I downloaded pictures to his computer and let him charge things before leaving.  Bad thing #3:  the generator just stopped working.  We tried starting it again, but no luck.

Dave decided to take a shower and call it a day.  Pete and I sat outside in the great breeze and visited on his last evening.  We watched some great lightening action off to the south.  And we heard a neighbor come home in the dark singing “show me the way to go home.  I’m tired and I want to go to bed.  Had a little drink about and hour ago, and it went right to my head.”  We watched to be sure he made it into his boat OK.  It’s a single guy about 30 years old.  Dave can’t wait until the next time he talks to him.  He’s going to start humming that song and see how he reacts. 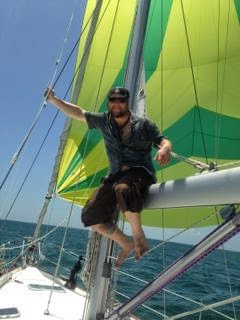 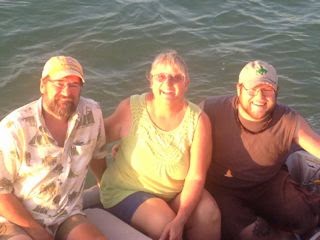 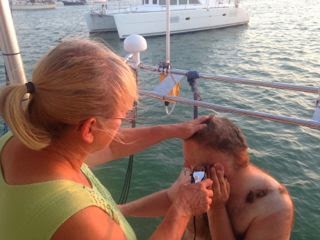 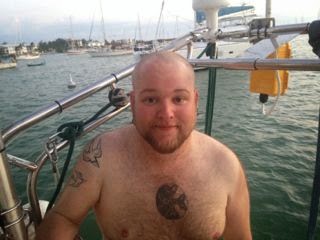