We spent the first half of the day getting the boat ready to set sail.  Then we cleaned ourselves up to head to Christmas Eve mass.  I attended a church on Saturday, so I figured out the bus schedule to return today.  They had a 4:00, 7:30 and midnight mass.  But the bus stopped at 8:00, so I chose to go to the 4:00 mass.  The best Christmas present ever was the surprise of Dave going to church with me.  He knew I was missing family and offered to go with me.  It made mass even more special for me.

Dave received a phone call while we were in church from Leon in Daphne, Alabama.  He returned his call and we found out our suburban was sold today!  Remember, Leon is the car dealer that prayed for a safe journey for us.  And then he calls while we are in church.  Another small world.

After church, we took some pumpkin dessert to another couple in the marina.  I meant to mention them earlier.  Ron and Libbo (short for Elizabeth) used to have a Beneteau similar to ours.  They sailed for 30 years, but now own a trawler.  They stopped by our boat a couple days ago just to tell us they admired our boat.  It was very fun to visit with them.  When we were in  Pensacola, we anchored on the bay where they live.  They stopped by again this morning and we told them about my blog.  Then on our way to the bus for church, they were just returning from the bus and gave us their all day bus passes.  So the least we could do was share our pumpkin bars.  Again, we sat and easily visited with them for about an hour.  They had read all of my blog since this afternoon.  They were going to go the same path as us, but now are returning to Pensacola for a repair.  We hope to cross paths again in the future.  Thanks for your hospitality Ron and Libbo.

We have listened to Jimmy Buffett's Christmas CD for about 15 years.  Today, when I heard A Sailor's Christmas, I started bawling.  (I've been kind emotional all day.)  I looked at Dave and said "we're really doing it".   Here are the words.

He's traveled through the doldrums, typhoons and hurricanes
He's logged a million soggy miles, with water on his brain
But Christmas is the season better suited for dry land
He'll tell some lies, meet some spies and dance barefoot in the sand

There's a party down at Le Select all music, rhum and cheers
Faces in the shadows, I haven't seen for years
The masts and shrouds are filled with lights 'neath the waning of the moon
There's an air of celebration in the realm of King Neptune.

Self photos are so strange.  But we did have some Christmas decorations. 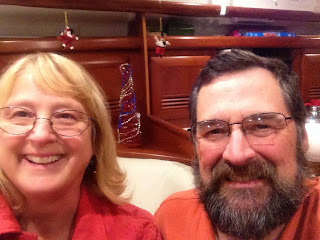 We arrived about 45 minutes early for church so we walked to the bay.  The church was about 2.5 miles from our marina. 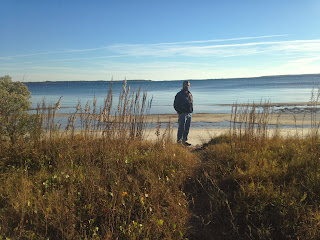 Posted by svluckofafool at 7:54 PM