Wow, what an unusual day!  We had been told that sailors are such friendly people, and had noticed that back in SD.  But it was true in Panama City, too.

I woke up around 7:00 as usual, but didn't have to get up for anything.  It felt great not to have to go anywhere or do anything for the first time in months. I checked e-mails and decided to let Denny and Debi Mills know that we were at their marina (even though they are in the Keys).  Then I went back to sleep (eye masks are great).  Later, Dave said we had an answer from Denny and one of his friends was going to stop by to visit with us.  So I thought I had better get up, get dressed and have some breakfast.  About 10:30-11:00 Horace shows up and we start visiting about our plans.  Pretty soon we are pulling out charts and he is telling us about all the great marinas and anchorages between here and Ft. Myers, our next destination.  Of course it was mixed with stories from both us and Horace.  He is also throwing out all kinds of boating information and I am taking notes.  What a great guy.  We instantly felt like friends.  He stayed until 3:00, but we had no idea he had been there 4 hours.

As he was leaving, a guy stopped by our boat, introduced himself as Stan, and invited us to a deep fried turkey dinner at the marina store at 4:00.  He was the manager of the marina.  There were two marinas that had a competition to collect toys for Toys for Tots and this was a thank you party.  But they were inviting anyone in the marina.

First we had to take our first showers since Sunday.  And I've been wearing the same over wear (vs underwear) since Sunday.  I can't speak for Dave on the over vs under wear situation.  I'll just say that since I took over doing the laundry, I haven't seen too many articles of clothing in that department from him.  I have changed from a shower every day to 2 a week.  That may increase when we are in warmer climate.  I'll at least have to rinse off the salt water after swimming daily.

We headed over to the party and happen to catch a beautiful sunset picture.  We started visiting with everyone we met, all so friendly.  I asked the people that worked at the marina if most of the people were slip owners.  She said actually, most of the people were people that worked at the two marinas, but a few slip owners were here and some other transient sailors, like us.  She pointed to the couple we were just talking to and said "Jeff and Karen are transients, like you.  They are on A Capella."  Dave said "as in the famous A Capella?"  And she said "yes the people from Active Captain."  Active Captain is an application we have on our phone that tells of current information about anchorages, marinas, changes in markings of channels, etc.  We checked Active Captain for anchorages when we came into Panama City just yesterday morning.  We were told about the Active Captain application by Denny Mills last June and have been using it since.  We had noticed from their site that they were just in Mobile Bay.  So we weren't completely surprised that they were here.  It was fun to meet them in person.  They even laughed at Dave's off the wall comments.  We found out they were from Maine, so they offered us information about when the best time would be to go there and when we had to head back south, where to find the best lobster, etc.  They even said to call them when we were in the area.  They have lived there 21 years and know everyone and everything about Maine.  Very nice people.  They started cruising in 2003 and were surprised how little current knowledge there was available for the safety of sailors.  So in 2006 they decided to start this site.

Now we are trying to digest the turkey and all the new information we received today.  My dad used to tell me it's not "good old American know how" as much as it is "good old American know WHO".  I think he's smiling right now saying "see what did I tell you?"  And he would be proud of our adventures.  Now my mom, she would be saying "now you've had your fun, it's time to get back to work."  Always kept me on track.  Miss them both, especially at Christmas. 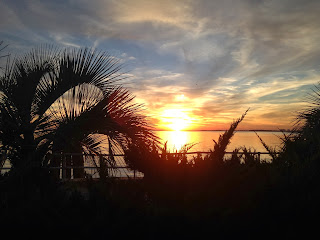