Today we explored Panama City.  We started out walking to a local restaurant.  We both had the 2 eggs, bacon, grits, and biscuits and gravy special.  Yes, we're in Florida. 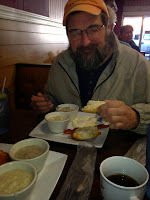 We walked to a local marine store for parts.  I'm realizing this is a never ending part of living on a boat.  Next was a bus trip to Walmart.  Somehow, Dave came up with something important to do on the boat.  Don't tell Marsha Humphreys of Your Eyes Only Optical, but I bought a new pair of glasses at Walmart before we left Alabama.  I figured if I needed any adjustments as we started traveling, they would be able to help me anywhere.  I decided to get transition glasses that change from light to dark in the sun.  I need glasses to read charts and was sick of changing them to go in and out of the boat.  If it was only the light to dark, I would wear a patch, like a pirate.  You know they wore them so one eye was already adjusted to the dark when they went below.  Well, I needed some minor adjusting, so I figured out the bus system to get me to Walmart.  I figured if I could get around Munich and Paris in my early 20's, I can do this.  Halfway there,  I decided to hold my jacket and bag in my lap, rather than the empty seat by the wall that the cockroach just crawled up.  Yes, we're in Florida.

I then browsed through a used book store to pick up some books for the future journey.  Don't have to worry about charging anything when you pick up an old fashioned book.  Met Dave for a beer at a pub with tables outside.  75 degrees, yes, we're in Florida.

After regrouping and making a new "to do list" for tomorrow, we decided to go out to an Italian restaurant for dinner.  Dave tipped his ball cap back off of  his eyes because this was a nice restaurant.  There was also a "Dickens Christmas" festival going on in historic downtown Panama City-walking distance from the Marina.  They had horse drawn carriage rides, ice skating (never did find that), train rides for kids, live manger scene, live music and kids karaoke singing Christmas carols, and Frosty the Snowman show projected on the side of a building.  We even saw fake snow shooting out of a second story window onto the street with kids playing in it.  Yes, we're in Florida.

I have to say, it sure is nice walking the streets enjoying all the Christmas festivities in just a light jacket.  It finally feels like Christmas.  They even have street decorations in the shape of sailboats.  Yes, this is Florida. 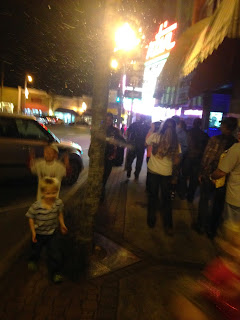 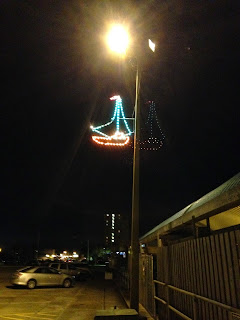 Posted by svluckofafool at 9:04 PM