Today was our SOMEDAY!!  We left Alabama to cruise indefinitely.  My t-shirt said "Monday, Tuesday, Wed, Thurs, Fri, Sat, Sun......see there is no Someday. 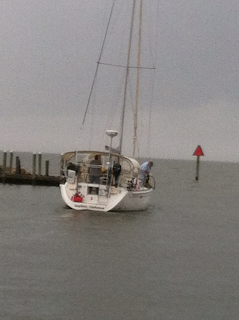 We left our suburban with a used car dealer at 6:00pm last night.  He even gave us a ride back to the marina after picking up our favorite pizza on the way.  What a guy!!  And before we got out of the car, he held our hands and gave us a blessing for safe travels.

We left Eastern Shore Marine in Fairhope, AL at 10:00 am.  It was overcast and foggy near the shore.  We were heading south and east into a south wind, so we motored to our destination today.  We decided to spend the night at the Wharf Marina in Orange Beach, AL.  They were having a special rate of $1/ft (usually $2/ft) because of the boat Christmas parade passing by their marina tonight.

We had been told that it was about 25 miles to the Wharf.  And since we only travel an average of 5 mph, it took us 6 hours of traveling time to reach our destination.  We had traveled down the bay once before.  There were no other boats out on the water on our side of the bay.  Rain was forecast, but it went out into the Gulf and missed us.   About noon, we had dolphins swim with us for awhile.  At about 2:30 we entered the intracoastal waterway (ICW).  For non-sailors, this is a channel that follows the coastline.  It is maintained at a set depth and width.  It's much calmer than being out on the open sea, but it is usually too narrow to sail. 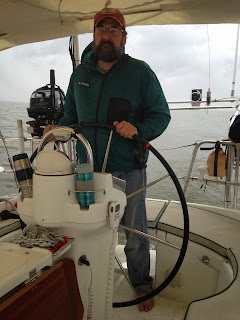 We have been able to view the ICW between Mobile Bay and the Wharf by car several times over the last year.  So it was very exciting to be traveling on it by boat.  One wish I have had for the last year was to stop at LuLu Buffett's restaurant by boat.  They have a dock that you can pull up to with your boat.  LuLu's is where the boats for the parade were starting, so we thought it would be too crowded to stop.  But as we came to LuLu's, the dock was empty, so we stopped!!  The staff were very helpful with tying up our boat.  We sat at the bar to save time.  We shared a blackened shrimp quesadilla.  I had to have a margarita, but Dave had sweet tea.  And we were back on the boat within about 40 minutes.  I was able to check that off of my "bucket list". 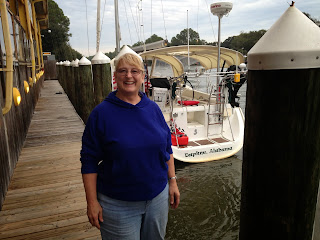 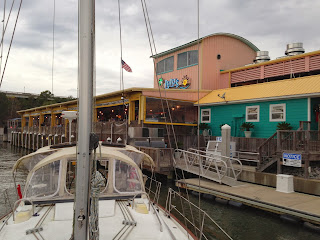 We reached the Wharf about 4:30.  Dave backed the boat into our slip so it would be easier to hook up to their shore power.  Their attendant said "looks like you've done that a few times".  We both started laughing.  Then explained to him how we started cruising today.

Our great neighbors from the marina, Debbie and Gary Jones from Ft Collins, CO, joined us for the parade.  It is only about an hour drive from the marina.  They were our photographers as we left the marina.  They also did another favor for us.  On the way to Orange Beach, they passed through Foley and right by our favorite BBQ restaurant.   We did not get a chance to go back there and pick up some of their brisket to freeze and take with us.  So they stopped for us, picked up our brisket to freeze and dinner for the evening.  It was wonderful.  Beef brisket, pork, BBQ beans, coleslaw, potato salad, and corn bread.  It was our first meal with guests at our table with the table totally cleared of computers and papers.  They even brought us a miniature Christmas tree.  I had told Debbie I was going to go to Dollar General for Christmas decorations that I could throw away and not have to store.  And since I didn't write it down on my list of things to do, it didn't get done.  So she remembered that and thoughtfully brought us a "disposable tree".  Thank you, Debbie and Gary.  You have been great neighbors.

This was a pretty exciting and emotional day for us.  We couldn't be happier.  30 minutes after we left port I had to say it "are we there yet?"  It really is strange realizing that there is no final destination.  We will sail as long as our health, the boat and/or our money lasts.  We are also looking for that "one particular harbor" (Jimmy Buffett song) where we may settle down someday.

Let me close with the words to "Stars Fell on Alabama".  Jimmy Buffett recorded it, but it was written in 1934.  It has been sung by Billie Holiday, Frank Sinatra and others.

For all the crooners and swooners wherever they may be
Moonlight and magnolias, starlight in your hair
All the world a dream come true
Did it really happen, was I really there
Was I really there with you

Chorus:
I never planned in my imagination, a situation so heavenly
A fairy land that no one else could enter
And in the center, just you and me, dear
My heart beat like a hammer, my arms wound around you tight
And stars fell on Alabama last night

--spoken:
Alright, lets take it on down from muscle shoals through decatur
Mmmm, birmingham, ooh montgomery
Right up over spanish fort into mobile, my hometown
Mister t...

Chorus:
I never planned in my imagination, a situation so heavenly
A fairy land that no one else could enter
And in the center, just you and me, dear
My heart beat like a hammer, my arms wound around you tight
Ah, stars fell on Alabama last night

Yes, we lived our little drama
We kissed on the dunes so white
And stars fell on Alabama
Last night


Posted by svluckofafool at 8:39 PM