Once again, I decided to be a volunteer for Ski for Light in the Black Hills of South Dakota.  We met Fred and Pati Meyling sailing over a year ago. Fred is physically disabled and uses a wheelchair.  I told them if they attended Ski for Light, I would go to.  Well this was the year.  My sister, Beverly Krause, usually attends and planned to this year.  Our brother, Don Zeller, has been a volunteer in the past.  Once he heard Bev and I were going, he thought he’d join us again.  Then his daughter, Katie Murphy decided to volunteer and bring her 4 year old daughter, Memphis.  Katie had guided many years ago and wanted to join us again.  Then a girlfriend from Groton, SD decided to volunteer.  Nancy Sunsdtrom had heard about this event from me for years and wanted to join us.  THEN, I told to Kaye Leslie from Canada that I was going, and she decided to come as a participant and have me guide her again.  We have had so much fun together in the past.  So this thing just started snow balling.  Besides seeing all of these people, it will be great to see all the people that come year after year.

I flew into Rapid City on Wednesday, Jan 22, as did Bev.  Tracy Perdue picked us up at the airport.  We borrowed their Jeep while we were in SD.  We stayed at her sister’s house, Tami and John Petersen’s and had dinner with both families that night at Buffalo Wings and Rings.

On Thursday, January 23, Bev visited band practice of the New Horizon’s Band that she used to play clarinet with when she lived here.  That night, Bev and I had dinner with a good friend, Jackie Killion, at Shooters, another old favorite restaurant.

On Friday morning, I joined my “coffee girlfriends” at Black Hills Bagels.  We used to have coffee after working out together at 6:30am.  They still meet every Friday, but moved it to 6:45, crazy change after all these years :)  It’s always fun share some laughs with them.

That afternoon, I met with a couple that are chartering a sailboat in the Bahamas for the first time, Diana and Bob Fuchs.  They had all kinds of questions for me.  They really appreciated picking my brain and just visiting in general.

That evening, Bev and I had dinner at our cousin’s home, Tom and Sharon Zeller’s, with their daughter Lysann.  They are wonderful hosts that love to cook.  It was also Tom’s birthday.  Once again, we had a wonderful evening at their home.  But, I had developed a cough that felt deep in my chest. 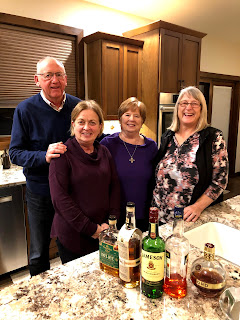 Trying to fit in as many friends as possible, Bev and I had lunch with my former alto choir members from church, Kathy, Marcia and MaryLee.  I almost cancelled because of my cough, but kept my distance.

On Sunday, everyone was packing to go to Deadwood for the week for Ski for Light.  I decided I had better go to an Urgent Care clinic to check out this cough.  Sure enough, I had influenza A and had to avoid contact with people for 2 more days.  So I went back to bed while the others went to Deadwood.
Posted by svluckofafool at 1:37 PM