Saturday, February 1. The party continues
One of our previous board members, Diana Cornford, hosts a party at her house on the Saturday after Ski for Light.  They have a big beautiful home that is perfect for party’s.  It was such a nice day that many people were able to be outside on their deck.  There were many participants from Canada there.  Most of them also sail.  They wanted a photo taken of all the sailors that were there.  There were 11 people in the photo, I believe only 2 of us were sighted, crazy.

That evening, there was a 50th birthday party for Tracy Perdue at their home.  I think there were between 75 and 100 people there.  Fun night of seeing more Rapid City friends along with the Ski for Lighters that were still in town. 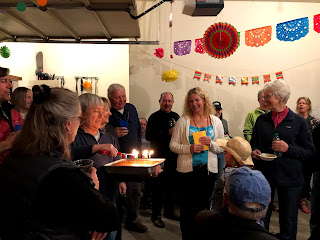 On Sunday, I attended mass at the Cathedral and was able to visit with a couple other choir members that still remembered me.  They had invited me to sing with them, but I still had a cough from the flu.  That evening, I had dinner with Fred and Pati and watched the first half of the Super Bowl at Murphy’s Restaurant.  Then I joined Bev at Cornford’s for the second half.  Another fun gathering of people.

On Monday night, Bev and I provided take out Chinese food for the Petersen’s and Perdue’s.  Kim Weyer had stopped by to visit, too, but couldn’t stay for dinner.  After dinner, I introduced them to my new favorite card game, 5 Crowns.  It is a type of Rummy game using a special deck with 5 suits.  They added stars for the 5th suit.