May 1, 2018 return to boat after knee replacement

I had no problem going through the airport security.  I had my card ready to prove that I had knee replacements.  I told them about it, but they said the metal on my shoes set off the metal detector, not my knees.  Interesting.

We decided to “get a room” for my first night back.  Dave had gotten us a room on ST Simon’s island. It gave us a chance to feel like tourists before moving back onto the boat.  Our room was near the pier and “pier village” with several shops and restaurants.  We stopped at the Raw Bar for oysters.  Then we had dinner at our favorite restaurant here, Iguanas. Their shrimp and grouper are always fantastic.  After dinner we walked the pier and enjoyed the sea breeze-which I have missed.  It felt great with my new knees. 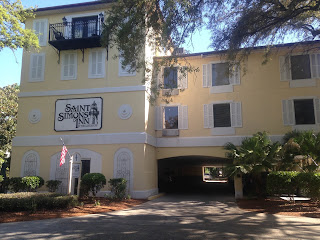 Getting back onto the boat with new knees went great.  Getting on, I had to step onto a 2 step folding ladder and then over to the boat, over different shapes (cowling), then onto the cockpit seat, then onto the floor.  I had measured these areas before leaving the boat.  We actually set up similar arrangements at physical therapy to practice these steps.  Which gave me confidence to return to the boat.  The companionway has 4 steps similar to a ladder.  It was easier for me to use them than before surgery!! Yippee!! 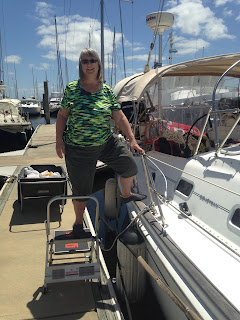 Being back at the boat felt great.  After spending 4 months in a home, I was concerned that I might feel claustrophobic, but it felt like home.

As I was putting away my luggage, I decided to share photos of our collapsable luggage.  These bags have been so easy to store on the boat.  They fold up into small rectangles the size of the end with the wheels.  There isn’t a bar for the handle.  So they seem wobbly when you are rolling them, but the good outweighs the bad.  We had 2 carry on sized bags but added a larger one for this trip.  It can match the carry on size or expand.  They would be great for anyone who had a storage issue, like collage students or apartment dwellers. 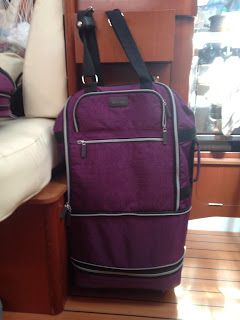 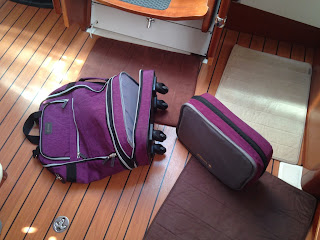 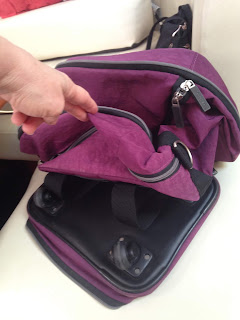 We rented a car for Dave to pick me up at the airport.  We ended up keeping it for a a month while we were preparing to leave.  It was handy to be able to run to the store for a part when you needed it.  I was able to go to choir practice and church on Sundays.  We could run back and forth to the storage unit as needed.  But, we also ate our more that we should have.

On May 5, I went to the community theater downtown with Nancy and Beverly from the marina.  Have also been joining Nancy and others to play dominoes on Sunday and Tuesday nights.  Typically we would play “Chicken Foot”.  While I was gone this winter, the marina added a karaoke machine to use the last Friday of each month.  It had only been used once, so I instigated using it in May.  Rather that soloing, we basically had a sing-a-long.  Fun night.  And there was a marina gathering to celebrate a birthday with lunch at Fox’s Pizza. 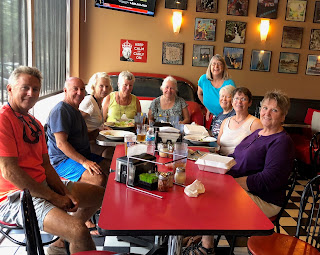 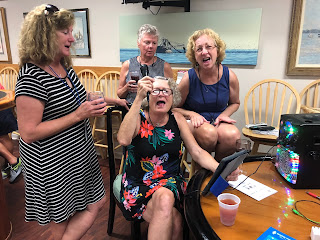 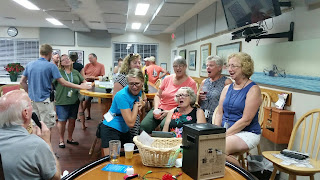 Vidalia onions grown in Georgia and are the best.  The local hardware store was selling bags as a fundraiser.  So I decided to buy a bag, cook them, and store them in 1 cup measurements in the freezer.  Yummy.  I used to avoid onions and garlic when I was breathing in people’s faces every day as a dentist.  Now I am enjoying them with only Dave to complain. 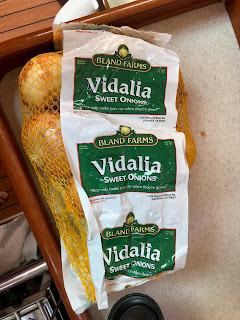 Occasionally we have manatee wander into the marina.  They are always cool to observe. 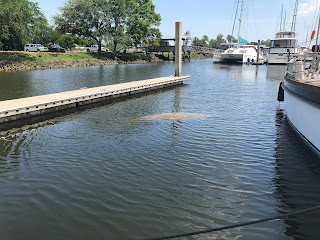 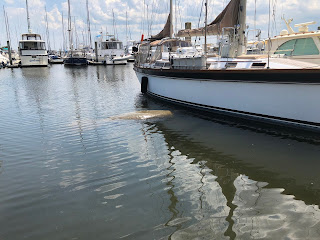 Posted by svluckofafool at 2:33 PM