Tuesday June 12
We spent another day at anchor here.  Dave organized the aft cabin.  He calls it “the garage”.  We have removed the cushions for the bed.  It is strictly for storage of tools and parts.  Any guests that stay with us have to sleep on the dining table that is made into a bed.  Keeps them from wanting to visit too long.

While in Brunswick, I shopped at an Asian market.  Tonight we had green curry with chicken on Odon noodles.  Very spicy and very good.

Wednesday June 13
Then next shallow area on the ICW is called Hell’s Gate.  It is about 45nm from here.   To pass through that area at high tide, it has to be early morning or early evening.  We thought we’d go part over the next 2 days, then go early the third day.  We had another relaxing morning and left about 11:30.  The ICW can be mentally tiresome.  We are constantly checking our Garmin/Active Captain app for hazards.  People update shoaling or other hazards regularly.  So it is much more usable than any printed material.  On our chart plotters, there is a “magenta line” that is considered the ideal area to travel on the ICW.  But it can be wrong or not updated after a hurricane.  So the Active Captain hazards are important to follow.  At 2:45, we were on the magenta line in an area with no hazards and felt our keel bump the bottom.  That’s only 5 feet deep and it was 2.5 hours before high tide.  Many boats have deeper drafts that 5 foot, so we added a hazard warning for that area.

About 3:00, it started to rain and we saw many lighting strikes in the path we were headed.  From the radar, it didn’t appear to be a big storm, so we kept on course.  About 3:30, we decided we could make it to an anchorage just before Hell’s Gate and leave early in morning at high tide, which would be about 7:00am.  At 5:30, we realized we could keep going through Hell’s Gate with high tide at 6:30pm, so on we went.  We entered that area about 6:10 and had no problem.  We found a nice anchorage about 7:00 and brought out the margaritas to celebrate. 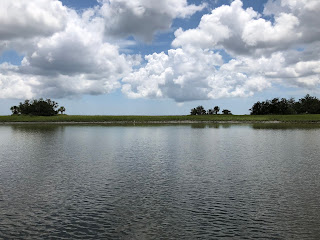 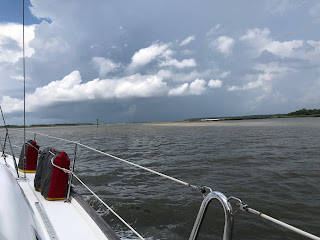 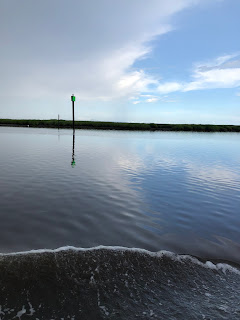 Thursday June 14
Lazy day.  Made water 90 gallons in 2 hours because water was so clear.  Usually 30 gallons/ hour or 3 hours.

Friday June 15
There was a lot of crazy vacationing activity on the river today.  We were following a small power boat under a bridge.  When they got under it, they stopped and looked up at the bridge.  Well, you can’t just put on the brakes, so Dave gave them the air horn danger warning of 5 short blasts.  That got them moving.  At another bridge closer to Savannah, there were about 20 jet skis sitting under the bridge in the channel we had to pass through, the highest point and dredged area.  As we moved closer, they just sat there.  So Dave gave them the air horn, too.  It looked like a group renting the skis, so they probably didn’t understand how the ICW works.  I think they were waiting in the shade of the bridge for the last of their group to join them.  But they could have been off to the side.

After crossing the Savannah river, the ICW enters “Fields Cut”.  Sometimes the ICW is part of a natural river, other times, a channel was made, called a cut.  Well, the advice on our Active Captain app was confusing and we went aground.  We tried for about a half hour to get ourselves free.  The tide was rising.  Usually you wait for the tide to rise and you can float off of the shallow area.  But the tide was pushing water into this cut and therefore holding us against the shore.  We didn’t think we would be able to motor against the current to free ourselves.  So we called Boat US for the first time since we have been members of this towing service, 2004.  I called them by phone and talked to a dispatcher.   When she asked for our membership number, Dave knew it off the top of his head.  When I late asked him about that, he said he thought we might need it today, so he memorized it.  Never know what he’s thinking.  They said the tow could take about an hour to get to us.  10 minutes after getting off of the phone, we were able to get our boat free.  Another boat passed us and their wake rocked the boat enough for us to move.  We called Boat US and cancelled our tow.  They also gave us local advice about passing through the cut, and we made it through just fine.  Whether you are a member or not, you can call them for advice about navigating an area.

By now it was about 5:00, so we started looking for a place to anchor.  We passed by a few that had the potential for getting stuck.  We found a beautiful anchorage on a creek just before Hilton Head.  It was funny to see a sunset cruise pass by our boat.  We had an awesome breeze and were able to eat dinner in the cockpit with no bugs.  Of course, cocktails were in order after our hectic day. 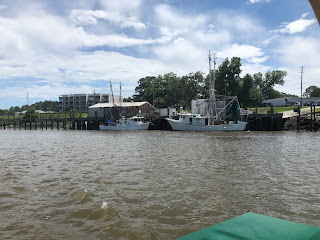 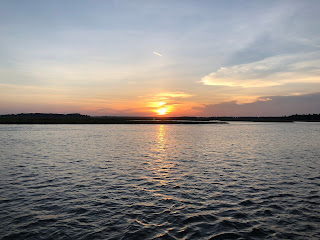 Posted by svluckofafool at 5:19 PM